Back to the real world...continued 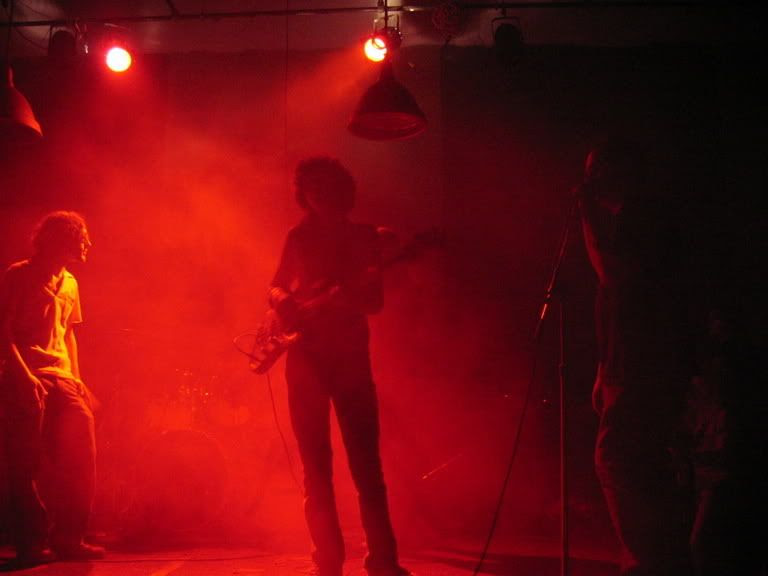 So. I survived Live 8 and the July 4 Elton John concert/fireworks display, both of which were held right down the street from my house this weekend. I think I fed about 50 of my kids' friends over the course of the holiday; at one point I walked downstairs during the Pink Floyd reunion and there were like 12 kids crowded around my computer and another 20 in front of the TV. The barbecue went on all day and night; then yesterday I had the same crew over for tacos. Got to meet Eric's new girlfriend, Carolyn (gorgeous, sweet, and everything a Mom could want for her son) and also her equally lovely parents, who stopped by on their way to the fireworks and because there was a jam session going on my living room at the time, we just sat on my front step and chatted which was very cool though of course I would have loved to have cracked open a couple bottles of wine (they drove down, though...not a good idea and it was also extremely hot).

Back to the real world yet again. In case you are an Eric Slick groupie, get a load of his schedule for the rest of the month:

This week - practice in upstate New Jersey for his show in New York City Saturday night on Wednesday, Thursday, and Friday nights.

Practice during the day all week for his upcoming gig with his new project, Abel. Okay, Abel is a tentative name and subject to change but I love it; that's the name of the Rock School bus driver during the infamous summer tour of 2004...however, knowing Eric et al I fully expect to come home today and find out they have a different name. It's comprised of Eric on drums, Julie on bass, Louie Graff on lead guitar, and Madison Flego on guitar and vocals. They are really, really good.

Somehow, Eric also has practice all this week and next week for his upcoming gig with Flamingo.

And this list is subject to many more additions. How awesome is that?!
***************
So speaking of Rock School, both my travels with the All-Stars and this blog has put me in touch with some very interesting celebrities and even better, fellow writers across the world. When we got home from Seattle after the great Eddie Vedder and Ann Wilson experience, I read about the kids' performance on a website www.twofeetthick.com hosted by a fantastic writer, LeAnn Mercer, which is "Pearl Jam for the Impassioned Fan" and it was so well written and so terrific I posted it here. Well, how freaking cool is this, LeAnn saw it, and sent me the following emails:

Hi Robin (and Eric and Julie!),

My name is LeAnn Mercer; I wrote a review of the Rock School Jam performance in Seattle with Ed Vedder and Ann Wilson. It was written for the website, twofeetthick.com, and Eric was kind enough to compliment me when he posted the review and webpage link in your blog a couple of weeks ago. I just got 'caught up' on your blog today...I've been meaning to email you ever since I saw the show here in Seattle, but seeing MY name on YOUR webpage prompted me to do it today!

I really enjoy reading your blog, Robin! I can understand your 'post partum' issues and think that the DVD will do very well -- I know there are a ton of Pearl Jam fans out there who wanted to see the movie but don't live in an area where it was screened in a theatre, so hopefully they'll get a chance soon with a DVD release. Several friends and I went to see it during the Seattle Film Festival when it made it's commercial debut at the Uptown Theater -- we loved the movie! It feels like a very honest portrayal of the school and the students, and the educational process of rock music is an amazing thing that the kids get to experience.

I have to admit though -- as much as I loved the movie, the live performance I saw at Neumo's was even better. (I saw the live show a few days before the movie, so maybe that contributes to my bias.) I was amazed at the broad range of songs performed, and really proud to see so many young women up there on equal footing with the guys. Of course, being a huge Pearl Jam fan myself (and a Heart fan, too), Ed's appearance was a nice bonus but I genuinely was there to see the kids, and they did not disappoint. Your own two offspring were really inspirational -- they're talented and seem very comfortable onstage; it was a joy to see them perform.

Take care, and please tell Julie and Eric 'congratulations' on all of their accomplishments. The future of rock and roll is in good hands.

LeAnn Mercer
Seattle WA
*****************
Naturally, I wrote back to her, and thanked her profusely, asked her permission to post her email in my blog, and told her I'd send her a Rock School soundtrack, etc. Also told her about Live 8 and how disappointing it was after being at Live Aid. Here's her response:

Robin,
Everything I wrote in my original email was from the heart; please feel free to post any part of it in your blog. : )

I've had a hard time getting excited about Live 8. I remember the first one...back in the days of VCRs...I taped the whole freaking thing and had to run home in the middle of a friend's BBQ to change tapes, haha. Today I'm tivo-ing it; not so much to save it, but so I can give it a head start and then fast forward through all the...crap. It's hard to fault a cause that seems to be of the best intentions, but the corporate aspect makes me gag.

And it offends me that Rock School wasn't offered a spot to play in the Philly lineup! It's a sad oversight. A couple of months before the Rock School Jam show, I attended a benefit show for the Northwest School, which is a private school in Seattle that focuses on the arts 'ahead' of humanities and science. Stone Gossard is a graduate and Pearl Jam has supported the school with numerous fund raising efforts. At the benefit, in between sets by Ann & Nancy Wilson, Bill Frisell, Pearl Jam, and the Presidents of the United States of America, kids from the school performed. In contrast to Rock School, it was a much more mixed bag of ability and appeal, but it was so cool to see those kids have the opportunity to perform in front of a hometown full house in the Paramount Theater. I think I was expecting a similar experience at Rock School Jam, and I was severely blown away by the level of musicianship those kids showed. There were a lot of great moments, but I really remember being stunned by their cover of "Pigs" -- I remember thinking, "Those are HIGH SCHOOL kids playing a fucking Pink Floyd cover that sounds AS GOOD AS PINK FLOYD." Before the show, some friends and I had dinner at a little Mexican restaurant across the street and when we came out, we heard the band soundchecking Corduroy -- and I remember exchanging looks because of how impressed we were. So...I guess my point is, it's Philly's loss not to hold them up as representation of the 2005 version of The Sound of Philadelphia. ; ) Is my age showing? Or did everyone have a little 45 rpm record of MFSB by TSOP?!

I would love any Rock School swag you'd like to send my way...

You're also going to have to eventually share that photo of you with Eddie, too, you know...I can't believe it's not on your blog YET. ; )

It was great to see you in my email box this morning. thanks for such a quick and delightful reply!

take care,
LeAnn
***************
So that kind of made my weekend though I admit, my weekend rocked. I love having all the kids over; when they jammed it was amazing, we stuffed our faces with great food for three straight days; and now it's time to be groupie Mom again and follow Eric all over the universe this month.

Oh yeah, my story is up at Slowtrains Literary Journal and guess what, my novel Three Days in New York City and I are going to be in Playgirl Magazine in November. More on that later...hahahaha...I guess it deserves its own special post, huh.
Posted by RobinSlick at 11:07 PM