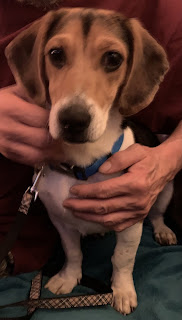 Gary said it was too soon but I went to Petfinder anyway and the first click was Jasper, just added that day.  I showed Gary and he gasped and told me to apply.  Unbelievably he was in a foster 10 miles away, next to the place where Gary got sober 35 years ago.  You can’t write fiction like this.

So, say hello to Jasper Slick.  We like to call him Jazz.

Posted by RobinSlick at 3:23 PM No comments:

My heart is broken 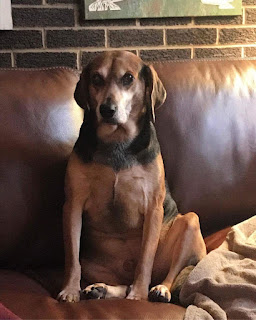 Posted by RobinSlick at 1:41 PM No comments:

I’ve been awake since 4:00 am with my dog, Jake.  The reason his ear infection hasn’t gotten better is because he has lymphoma. I’m listening to his labored breathing and my heart is broken in a million pieces.  He’s clearly dying before my eyes and I am in agony this morning.  I hate being an adult. 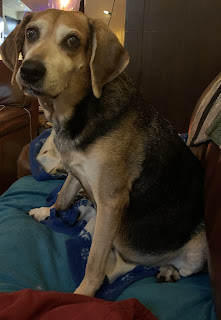 Posted by RobinSlick at 7:27 AM No comments: 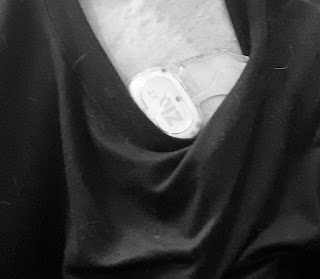 Posted by RobinSlick at 8:13 AM No comments:

While I Am Too Scared to Move 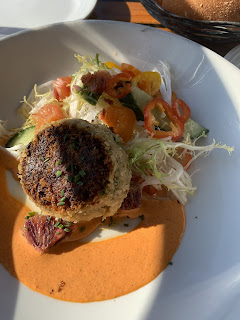 So as I continue to sit on the sofa this week, hooked up to a heart monitor and scared to move because I now take blood thinners and know someone who hit his head and bled to death while taking them, I wrote a juvenile puff piece for Medium about annoying old people (like me) on Facebook 😎

So, as I threatened… 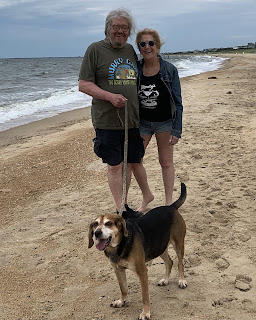 I wrote up my sad tale for Medium, where it’s enjoying a pretty large readership this morning 😎https://link.medium.com/WhATBxvaIjb

Posted by RobinSlick at 1:57 PM No comments:

My week in hell 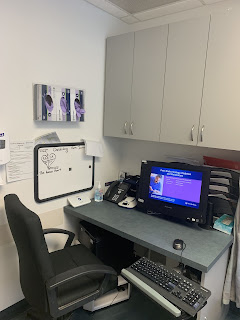 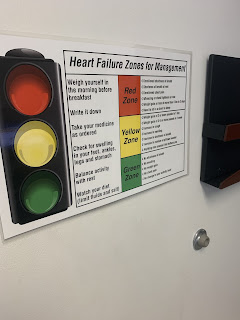 So Gary and I had such a terrible week I can’t even put it on Facebook because that’s where my close friends and family are.  I don’t think anyone reads this blog anymore except for when I put a link on Twitter so I’ll hide my post here.Because you know when I’m upset I gotta write about it.Long story short (though I am planning on writing a regular column about this for Medium.com), I flunked my routine physical, my alarmed doctor made me a STAT appointment for a chest x-ray and an echocardiogram after which I got an emergency appointment with a top cardiologist at Penn.Yay.So now I’m one of those retirement stories.  Busted my ass working for 50 years, made it (so far) through a pandemic, and just as I’m starting to relax and travel and have a good time, I find out my left ventricle is malfunctioning and my aortic valve calcifying.I have persistent atrial fibrillation.So fuck fuck fuck, I need to have a mildly scary procedure which may or may not work, if it doesn’t work there’s a slightly more scary procedure, and if that fails, we’re talking pacemaker.Wait, wut?Me?The vegetarian who right now weighs 134 pounds?Anyway, if this isn’t a big enough nightmare, I have to be on blood thinners the rest of my life.I also have a whole story about that.All you need to know for now is that the medication I have to take is $600 a month and is not covered by my insurance.I spent the week doing research and talking to insurance agents about this and luckily Medicare open enrollment starts 10/15.  I can swap out Part D for insurance that will cover my medicine.  I’m on the hook for $600 a month until 1/1/22, though.Good times.Luckily we can afford it but I can’t help but wonder what happens to people who can’t?Without this drug, I will likely die of an errant blood clot.Sooo, the week wasn’t shit enough, on Tuesday we get a frantic knock on the door, it’s the gas company, there’s a gas leak on our street.  All day Tuesday and into Wednesday we had PGW workers traipsing in and out of our house.  I had to stay upstairs with the dog.We were both very unhappy.On Thursday, I got a call from my new cardiologist’s office.  We scheduled my procedure along with a Covid test two days before.I also have to quarantine a week.She also went over a whole new list of do’s and don’ts now that I’m a heart patient and on blood thinners.The doctor had already gone over this with me but I think he saw my shocked expression and knew I was hearing nothing but white noise.Oh yeah, I also have to wear a heart monitor 24/7 for the next two weeks.Between that and everything horrible that will happen to me if I accidentally bang/cut myself while on blood thinners, I am never going to leave the sofa.Scratch that, I was told I should be walking 30 minutes a day.Welcome to my nightmare.Thursday afternoon, Gary and I had a conference call with our financial advisor.Yeah, I know.I can’t believe we have one, either.Sometimes for a stoner hippie I can be fairly smart, though.  Everyone should have a financial advisor. It’s how we were able to retire and afford $600 a month blood thinners.Arghhh.We also had to fill out beneficiary paperwork which really freaked me out given the other developments of the week.So yeah, that was a weirdly stressful phone call, too. Gary and I are not money people.  Something something annuity something lump sum something.  No clue, but we’re all set.And then naturally this morning Jake woke us up at 4:00 a.m. with ear trouble again.  I went downstairs with him and couldn’t fall back asleep.  I was so exhausted that Gary took him to the vet without me.For the first time, our vet mentioned possible cancer.  I have to admit it’s been on my mind, too, but I’m trying not to think that way.  His appetite is still great.  He just seems out of it a lot and very low energy.In a way, I was glad the vet told Gary without me there. I would have broken into sobs.  Gary handled it stoically though he thinks Jake’s decline is old age, he’ll be 12 in a few months.I’m so sad either way.But we’re taking it a day at a time and as long as he’s still happily eating and not in pain, who cares if he doesn’t want to go for runs in the park.Ms. AFib over here can’t chase after him anyway.We’re always going to have a dog.  If it were up to me, we’d have 2-3 rescues, more if we had a bigger yard.So that’s my week.My response at the moment is to regroup and hit the beach next week.  I mean, what the fuck else can I do?I’m also gonna have a fun weekend before I have to go through all this stuff and start eating kale and shit 24/7.Pizza tonight, french fries tomorrow.Hahaha I should probably go to the beach now, huh.Sounds like a plan.
Posted by RobinSlick at 6:05 PM No comments:

Dead to me forever

You’re both dead to me forever.  Abbott’s already dead, the only shock is that he’s out in daylight without his cape.  I seriously want to move to Portugal. 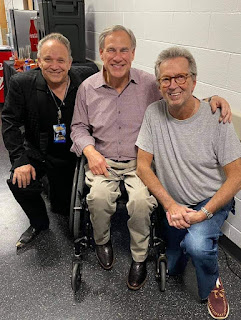 Posted by RobinSlick at 4:28 PM No comments: 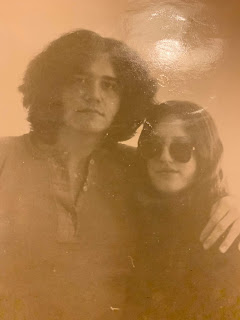 So I’ve been doing some humor writing for Medium 😎 https://medium.com/boomerangs/our-50th-reunion-is-a-luncheon-6e5c1aa8e407

Posted by RobinSlick at 10:43 AM No comments: 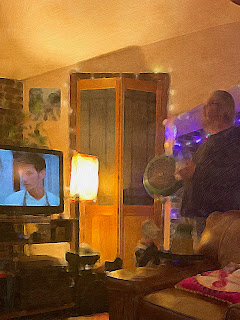 So I’ve been looking for a place for my political posts because if I type what I am really thinking about America these days, I’m gonna be thrown in Facebook jail.I also cross post to the blog I’ve had since 2004, but I am even nervous about losing that.So I started poking around a couple sites like Medium and Substack. You really have to dig deep to find the good writing but when you find it…wow.  But the bad writing is really, really bad.I poked around the music section and thought, ooh, maybe I will take a stab at writing there, too.  But then I read what felt like a twelve year old’s review of a concert.  He spelled the musicians’ names wrong.I just can’t.  Another review, this time about the Beatles, made me hold my head in my hands altogether.  It was 40, well written paragraphs.Unfortunately, 32 of the paragraphs were all about the author/reviewer.  He went on and on about himself.Only 8 paragraphs were about the Beatles.I know, I counted.Stuff like that drives me nuts.Anyway, Twitter and Facebook aren’t doing it for me right now so I think I am going to take my anger and frustration about our country elsewhere.  I’ll let you know where I end up and provide links. Shhhhh.Of course I will still post Facebook-y stuff here. Like, Eric has been staying with us all week!And tomorrow, we’re throwing a barbecue for his band outside their rehearsal studio. Gary is doing some serious cooking right now.He does barbecue beans from scratch and they are everything.Yeah, I’m excited about that.Also, Eric will be here for Thanksgiving AND Christmas.Julie will be here for Christmas, too.Stay away, Delta.  I’m warning you.Tuesday night we’re all going to see King Crimson and the Zappa Band at the Mann, and then Eric literally hops on his tour bus right after the show for a couple gigs in New York and beyond.Good times!I leave you with a pic of Gary, because it’s hilarious to me.  He’s now addicted to watching Great British Menu.I know, right?Who is this weirdo and what has he done with my husband?This pandemic, man.  I don’t know about you guys, but it was sure life changing for us.But hey hey, if you like Great British Baking Show, Great British Menu is even better.Plus, each season has 45 shows.It’s been on since 2005.I started binging with Julie in Seattle in July and I’m not even half way done.Anyway, enough out of me.Happy Labor Day.

Posted by RobinSlick at 12:24 PM No comments: