The First Church of Appliantology

Eric Slick on drums with Project Object at Zappanale, performing a song from Frank Zappa's brilliant Joe's Garage, with the role of Mary (and click on link for full explanation) rather bustily...I mean...lustily...performed by our now good friend, Dr. Dot. In case you do not know this, the part of Mary was originally played by Dale Bozzio, who would later go on to form/sing with Missing Persons.

Okay, okay, I know you want more Zappanale photos...oh alright, I know you really want Dr. Dot so here you go. I like to make my readers happy.

You can all thank me later.

Ha ha - looks like bass player Dave Johnsen is having a good time at the First Church of Appliantology. 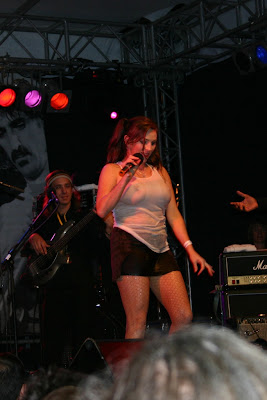 But maybe not as much as Eric Slick...

Is this an actual poster of Eric? I want one! Or, I could be way off. I will have to ask him.

In other related news, I received a lovely email from the Idiot Bastard himself, Andrew Greenaway, who wrote:

"We chatted a fair while with young Eric over the last weekend; great kid - does yer credit, etc. As I was going over to compliment him on his playing after PO's set, I heard many shouting that he was awesome. Of course, I relayed this to him, as they were right, though my choice of word was "phenomenal". The whole weekend was a blast. You shoulda been there! I told Eric you'd asked me to keep an eye on him - which he bought!"

That's hilarious. I love Zappa fans and wish I could have been there but I know one thing - I can't wait for Andrew's yearly diary of the Zappanale Festival. Naturally I will post a link and probably cut and paste it here, too, as soon as he's got it finished.

So the craziness continues at Casa Slick - Thursday night Eric has a gig all the way past the New York City exit of the New Jersey Turnpike but it's with one of his favorite people in the world, Ween's bassist Dave Dreiwitz, and it'll be at the Court Tavern in New Brunswick. He probably won't get home until well after midnight, just in time to grab a couple hours of sleep, head to the airport at 6:00 a.m. and jump a plane with Julie to Nashville in preparation of Sunday's mini-tour of Atlanta, North Carolina, and Florida with Adrian Belew. On Saturday, August 18, 2007, Eric, Adrian and Julie will head over to Fork's Drum Closet for a special Paiste event, which is way cool since, as you probably already know from the billboards I've posted all over the internet, Paiste Cymbals endorse Eric. I had a look at Fork's Drum Closet's website - oh my God, Eric is going to be in freaking drum nerd heaven.

But that's if he even wants to leave Adrian's house, because there's a special present waiting for him there: Adrian bought him a Yamaha silver sparkle drumkit for touring and in light of the way Eric is in love with his Yamaha Anton Fig snare, it's going to be hard to get him to go anywhere I'm guessing.

But in theory, that's where the trio will be on Saturday, and then Sunday night is the first show on this leg of the tour, at Stella Blue in Ashville, North Carolina.

Here's an article about the trio's upcoming gig there.

I'm cranky because I cannot go, especially since I've heard amazing things about Asheville and also, it's my birthday. I'm doing someone I really like a favor and actually working full time in a law office that week and the next so that she can go on her first extended vacation in years. But I'm going to break it up by flying down to Florida the weekend of August 25 so that I can catch the trio's show in West Palm Beach at the State Theater (and I'll be posting links as the time gets nearer) and then reward myself by being groupie mom at the Mexico shows in September.

And then it will be time for our annual two weeks at the beach where I am mostly internet free...which, believe it or not, is one huge relief.

Oh well. That's it for now. I leave you with this:

Later,
Posted by RobinSlick at 5:00 AM