So yesterday I hung out with Julie at her apartment and we had an absolute blast.

I arrived around noon, starving, which is always a good idea when you visit Julie Slick because she is a Master Chef and to waste those talents would be just plain dumb. And because she is both my daughter and best friend, she was totally prepared for me to visit in that state and made me an awesome omelet stuffed with sliced avocado and goat cheese and topped with black bean chili in mole sauce with toasted almonds, accompanied by a side salad of arugula, avocado, and walnuts in a light caramelized onion vinaigrette. Those red squiggles on the plate turned out to be hot sauce...very, very good with the dish for sure. 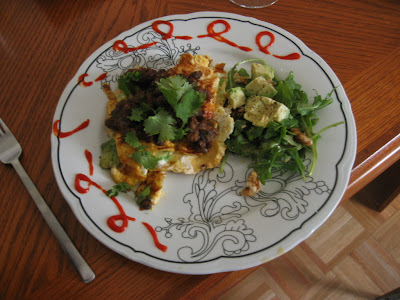 Julie will be talking more about this meal and including the recipes and more photos in her next blog post, but in the meantime, she has updated her journal with a great broccoli cheddar soup and garlic cheese pitas...we are dead serious about our cookbook...anyway, here's a link to Ms. Julie's latest entry.

After lunch, we broke out the paints. Within a half hour, Julie had managed to sketch out a brilliant beginning to a portrait of Igor Stravinsky, it took me two hours to accomplish the piece on the left -- I know, I know, it looks like the work of a genius...um, a seven year old genius, that is...but I have high hopes for that painting and it's only in its beginning stages. 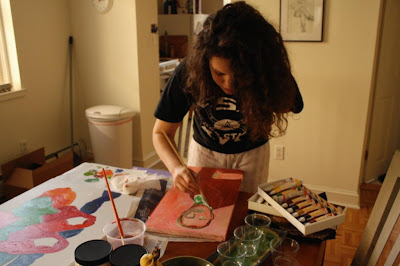 Unfortunately, we will not be having another "date" until after February 18, because as I've been broadcasting all over the internet, tomorrow Julie and Eric are headed for Nashville to Casa Belew to begin recording their first studio CD, "E". What's that, you might ask? Well, let me quote Adrian on that:

"so...what is "e" ?
of course it's rather senseless to talk
about music you have yet to hear,
but senseless is my middle name, so here goes.

e is a thematic piece of music in five sections.
it is based on a 16-note chromatic figure
which can be played up and down the neck,
both forwards and backwards and in various keys.
it could be seen as five pieces of music,
since each section can stand alone
but I prefer it as one long piece.
how long? 40 to 50 minutes.

the chromatic e figure is used in compelling ways
both against itself and with itself
to create complex rhythms and harmonies.
each of the five pieces of music flow through
a wide variety of secondary themes and melodies
some of which reappear, but they all are based upon
and eventually come back to
the e figure.

in some areas the timbre of the piece
is much like something King Crimson might do,
but I've used Gershwin, and Stravinsky
for my guidance and inspiration as well.
I have been writing e for more than two years!
it's very difficult (at least for me) to play.
along the way I make 16 different loops.
in order to add parts and solos over top of the loops
each loop has to be perfect, of course.

e has been written and arranged
specifically for the mighty power trio.
but it may also be worthy of classical orchestration.
I could hear a rock trio treatment
and a classical treatment (with horns, strings, etc.)
and even a combination of the two.
but I'm getting way ahead of myself.
classical treatments don't fall off trees.

as diligent and single-minded as eric and julie
and I have been in our approach to learning e,
we have yet to actually record a single note.
this being eric and julie's first "new" record
I'm hoping to make something grand
for them to be proud of.

then we'll have to play it live."

All I can tell you is, I've heard the rough cuts and it's a masterpiece...a classic in the making. Stay tuned for news about just where and when they will be playing it live, though Pollstar has a few dates up already.

Getting back to my day with Julie...

After we were finished painting, Julie smiled at me with an evil little grin and said "Okay, now we're going to play Wii!"

"Trust me, Mom, you're going to love this. And it's great exercise!"

Ahem. Love and exercise do not go together in my world, but okay, I'll give it a try.

And now a series of photographs where I am clearly having a heart attack. Please also note two things. One, I am not that fat. I was literally wearing three shirts because I was cold, and the final t-shirt on top was a large to accommodate the two shirts underneath. Second, please notice said t-shirt. It says "The Smart One" and I scored it from the author of an incredible book with that very title (which I just cannot recommend enough), the beautiful and brilliant Ellen Meister, who was kind enough to give me a new blurb for my latest novel...and you will read all about that in the next day or two in "The (Mostly) Robin Slick Post". I am currently in the midst of updating my website to feature the book and links where you can buy it...and there will also be a contest where you can win free copies, hot off the press.

But for now, let's watch Robin have a coronary: 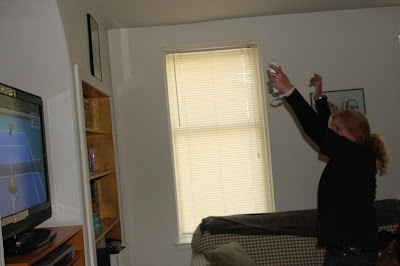 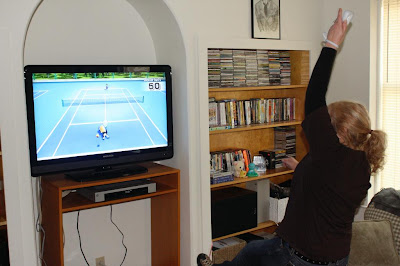 Okay, you can clearly see my Smart One t-shirt in this photo, as well as my Wii avatar, which sadly looks exactly like me...especially when Wii put big white shoes on my feet whilst playing baseball which made me feel -- both in real life and Wii World -- as though this was the Special Olympics and I was the participant who scored so low she got the Good Sportsmanship trophy and even that only because the judges took such pity on her. 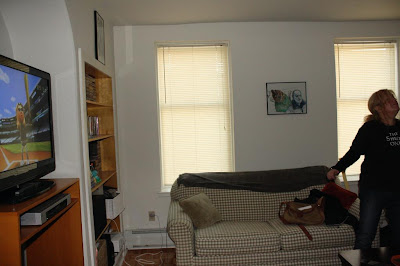 Finally, after much huffing and puffing and going through ridiculously stressful games of tennis, baseball and gah! bowling where I almost slammed my daughter in the face accidentally, fell backwards several times, and nearly broke a lamp, Wii gave me my true age: 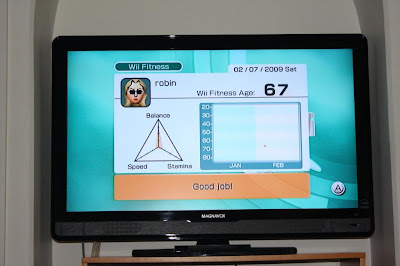 My Wii Fitness Age, however, is an age I aspire to achieve in real life because at this point, I'll be happy to live another week.

I admit it. I went home and drank several shots of Jack Daniels to rid myself of post-Wii back pain because Advil just didn't do it for me.

Oh, okay, it was more because it was Saturday night and I felt like partying...I'd just spent an amazing day with my daughter.

Alrighty, that's enough out of me. Stay tuned for news concerning the long-awaited release of my first mainstream novel, Daddy Left Me Alone with God...and as soon as I get the okay to talk about the major happenings in Eric Slick's world, you guys will be the first to know.

Oh wow...wait...this just popped up and I'm afraid to say much more because of the psychotic Mafia "Trust", but take a look at this...