Project Object on Tour: Tonight in New York City (and why did I post that photo of Eric wearing that particular shirt again...) 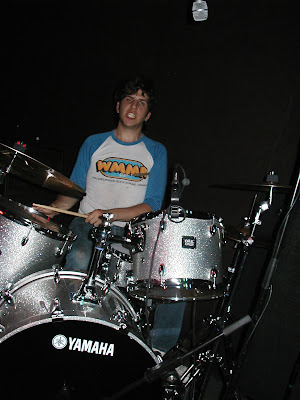 Eric Slick wearing the infamous WMMR shirt won by his father over twenty years ago in a contest held by said radio station...I blogged about it a couple of months ago and in case you forgot, here's the link.

So if you are in the New York City area, tonight you must check out Eric on the drums with Project Object at the Lions Den, 214 Sullivan Avenue in the Village. It's going to be freaking amazing!

ETA: Oh my god, I just got this You Tube from last night's show from an anonymous commenter on my blog. I'm sitting here crying like a little freaking baby right now it's so damn good.

And just a reminder that tomorrow night's show in Asbury Park has been changed and will now be held at Asbury Lanes, and on SUNDAY, SUNDAY, SUNDAY, I will finally get to see this show at World Cafe Live in Philadelphia -- Eric is also the opening band with Dave Drewitiz of Ween, i.e., Crescent Moon.

Err...you can also download Wednesday night's show right here. (I cannot figure out how to do it, though...I mean, I downloaded it but have no idea how to actually play it and after the great hard drive crash of 2007, I'm terrified to attempt anything I'm not sure how to do).

But wait...here's one download I was able to figure out - it's "Echidna's Arf (Of You)/Don't You Ever Wash That Thing?" and oh man, what a tease!

I haven't found any reviews of the Hartford or Troy, NY shows yet so if anyone reading this attended either show Wednesday or last night, I would love to hear from you.

So. Why did I post the pic of Eric in the WMMR shirt, which was actually from the show Eric played with Adrian Belew back in August?

Because last night, Gary and I once again proved that we are uber parent/groupies. More on that in a minute.

But before I begin, congratulations to Al Gore for winning the Nobel Peace Prize. You can be sure that's one thing that our dangerous, demented dictator in the White House won't be winning anytime soon. Knowing Dubya, though, he probably thinks it's for most books sold at Barnes and "Nobel".

Which is another thing he won't be winning anytime soon, unless, of course, he writes his true autobiography about how the war in Iraq was all about oil..."his oil" har har. I shouldn't laugh. Thousands of people are dead because of his greed. And if you are rolling your eyes and sighing over what I just wrote, why not read this.

Okay, enough of that. I want to talk about yesterday in general.

Some days are just fantastic, you know? Fantastic on a level that doesn't involve publishing or movie deals, agents, big money, blah blah blah...but fantastic because it involves spending one on one time with someone you really love - in this case, let's start with daughter Julie. Eric is on tour as you know, Gary was at work, Julie's boyfriend Matt had a gig in New York with his fabulous band, Cheers Elephant, and so Julie and I decided to have a "date".

We had a fabulous lunch at Seafood Unlimited. Julie had an ahi tuna dish served over a slaw of cucumbers, Asian pears, and who knows what else but it was so good I kept sticking my fork in her plate. I opted for charred Atlantic salmon over mixed greens -- sounds simple -- yet they managed to make it spectacular.

Then we actually went girly shopping - I bought three new black sweaters because god knows 300 black sweaters in my closet are not enough and Julie picked up some awesome tops as well.

Next, we headed to Sianni Salon where Julie got her beautiful curly hair shaped and trimmed and Linda Zatta, the genius who manages to keep my unruly frizzy mop under control, could not resist the urge to put make-up on Julie while she sat in the chair next to me waiting for Linda to finish my hair. Oh man, you should have seen her. Julie, that is. Because she is so naturally gorgeous, she doesn't need make-up and never wears it (that's me saying that, not Julie)...but Linda put this sheer, beige shimmery stuff on her eyelids, curled her lashes, applied a little blush to her cheeks and finished with a rosy lip gloss. To say that Julie looked breathtaking is putting it mildly. So after we finished up there, I insisted on dragging her with me to Sephora so that I could buy her this stuff (which, if you check the PETA website is not tested on animals) but then we looked at our respective watches and gasped when we realized it was dinner time and Julie had to be at the restaurant where she works while the Belew tour is on hiatus. So...sob...we had to run out of there before buying anything and Julie made it to work just in time, but not before casually mentioning to me that "Pierre Robert from radio station WMMR would be there and would Gary and I like to pop over for dinner?

Err...a chance to talk one on one with Philadelphia's most famous rock and roll disc jockey? With a copy of the Adrian Belew Power Trio's Beatbox Guitar and Drumhead Magazine in our hot little hands? What do you think?

So Gary and I double-teamed Pierre and his sidekick, Jason, and handed them the CD and magazine, I introduced Julie to Pierre by saying "she may be your server tonight but she's also Adrian Belew's bass player" and then Gary, who'd met Pierre and Jason at the Ray Davies concert last year with Eric when they sat next to each other, filled them in about Adrian...anyway, we had a blast and went home feeling pretty satisfied with ourselves but wondering, because the restaurant was so crowded, if Pierre and Jason would actually read the Drumhead article and listen to the CD and help us promote Side Four Live when it comes out in the...err..very near future. Gary went out to walk the dog and took his usual route, which is right past the restaurant and saw that Pierre and Jason were still there and the place was empty. So being the uber-groupie dad he is, even though it was late at night and he has work today, said to me "You know what? I think I'm going back and talk to them some more...just so they "get it", you know?"

So that's what he did.

We are working on global domination for the Adrian Belew Power Trio and trust me, we're gonna succeed. It's such a labor of love, I can't even begin to tell you.

And if you want to read a really wonderful essay about that very subject, you must visit Susan Henderson's website today. Cool? Cool!