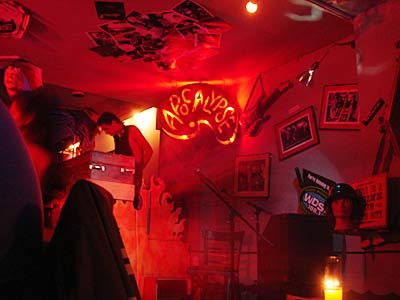 So I got this e-mail from a fellow writer in New York City yesterday: "Robin, would you be interested in headlining at the Apocalypse Lounge on November 14th?"

Uh...headlining? Would I be interested? You think? Hahahaha - I'm already planning the outfit and stand-up routine. So that's pretty cool, huh. Make sure you put it on your calendars. Robin Slick, headlining at the Apocalpyse Lounge on November 14. If you've never heard me read...you're lucky. No, seriously, please come out for what will surely be an insane event and of course I will remind you all non-stop for the next three months.

If you click on the link, you'll see the Apocalpyse is a very cool venue, home to all kinds of artists. This naturally got me thinking about David Sedaris, because I'm re-reading Me Talk Pretty One Day, and if you've had the pleasure of reading that awesome book, you'll remember David did a stint as a performance artist which he writes about in his inimitable, hilarious way. This line of thinking took me down another path as I starting giggling uncontrollably over the infamous essay included in Me Talk Pretty, "Big Boy", which I am reprinting here courtesy of our friends on the internet, who make just about everything available. This is not for those with weak stomachs or those without a warped sense of humor, so if you do not qualify, you can stop reading now...but if you want to, um, laugh your ass off, here goes:

It was Easter Sunday in Chicago, and my sister Amy and I were attending an afternoon dinner at the home of our friend John. The weather was nice, and he’d set up a table in the backyard so that we might sit in the sun. Everyone had taken their places, when I excused myself to visit the bathroom, and there, in the toilet, was the absolute biggest turd I have ever seen in my life — no toilet paper or anything, just this long and coiled specimen, as thick as a burrito.

I flushed the toilet, and the big turd trembled. It shifted position, but that was it. This thing wasn’t going anywhere. I thought briefly of leaving it behind for someone else to take care of; but it was too late for that. Too late, because before getting up from the table, I’d stupidly told everyone where I was going.

“I’ll be back in a minute,” I’d said. “I’m just going to run to the bathroom.” My whereabouts were public knowledge. I should have said I was going to make a phone call. I’d planned to urinate and maybe run a little water over my face, but now I had this to deal with.

The tank refilled, and I made a silent promise. The deal was that if this thing would go away, I’d repay the world by performing some unexpected act of kindness. I flushed the toilet a second time, and the big turd spun a lazy circle.

“Go on,” I whispered. “Scoot! Shoo!” I turned away, ready to perform my good deed, but when I looked back down, there it was, bobbing to the surface in a fresh pool of water.

Just then someone knocked on the door, and I started to panic.

At an early age my mother sat me down and explained that everyone has bowel movements. “Everyone,” she’d said. ‘Even the president and his wife.” She’d mentioned our neighbors, the priest, and several of the actors we saw each week on television. I’d gotten the overall picture, but natural or not, there was no way I was going to take responsibility for this one.

I seriously considered lifting this turd out of the toilet and tossing it out the window. It honestly crossed my mind, but John lived on the ground floor and a dozen people were seated at a picnic table ten feet away. They’d see the window open and notice something dropping to the ground. And these were people who would surely gather round and investigate. Then there I’d be with my unspeakably filthy hands, trying to explain that it wasn’t mine. But why bother throwing it out the window if it wasn’t mine? No one would have believed me except the person who had left it in the first place, and chances were pretty slim that the freak in question would suddenly step forward and own up to it. I was trapped.

I scrambled for a plunger and used the handle to break the turd into manageable pieces, all the while thinking that it wasn’t fair; that this was technically not my job. Another flush and it still didn’t go down. Come on, pal. Let’s move it. While waiting for the tank to refill, I thought maybe I should wash my hair. It wasn’t dirty; but I needed some excuse to cover the amount of time I was spending in the bathroom. Quick, I thought. Do something. By now the other guests were probably thinking I was the type of person who uses dinner parties as an opportunity to defecate and catch up on my reading.

One more flush and it was all over. The thing was gone and out of my life. I opened the door, to find my friend Janet, who said, “Well, it’s about time.” And I was left thinking that the person who’d abandoned the huge turd had no problem with it, so why did I? Why the big deal? Had it been left there to teach me a lesson? Had a lesson been learned? Did it have anything to do with Easter? I resolved to put it all behind me, and then I stepped outside to begin examining the suspects.
********

Okay, I'm off to the showers for an early start; my first one since I've entered unemployment world. My son has rehearsal with his new band all day so I'm walking him to the train in order that I can go to the bank and, excuse the expression in light of the above, make a deposit.
Posted by RobinSlick at 6:30 AM