You can thank me later...

Good morning!  I'm starting this very patriotic week off by doing my civic duty.  You can thank me later. 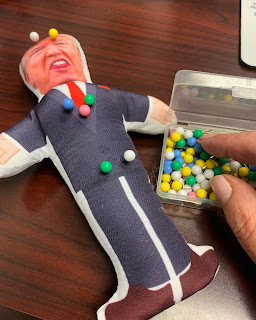 Posted by RobinSlick at 8:00 AM Links to this post

Where have I been?

Oh hell, I stopped blogging again, just as I got started last year.  Welp, I had a health issue in July which knocked me on my butt for half the summer and then I was so damn busy trying to catch up, I totally forgot about blogging.

So what's new?  I'll fill you in shortly.  I still hate the President with a passion but I loathe his supporters more, especially the Evangelicals who anxiously await the rapture...i.e., the death of Jews, of which I am one.

When you see/listen to his supporters, you realize how badly the public school system in this country has failed.

And you realize how grotesque organized religion is.

Okay, the end for now.  Got lots to report, just wanted to get my feet wet again.

xo
Posted by RobinSlick at 2:17 PM Links to this post