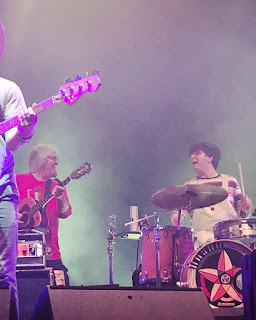 This was a pretty spectacular weekend for the Slick family music wise, but before I launch into that, speaking of music, if you haven't already seen James Corden's karaoke with Paul McCartney, stop what you are doing right now and watch.  You don't have to be a McCartney fan, this is one of the greatest things I have ever seen on television and had me smiling for hours.  Eric and Natalie came over yesterday for dinner and I pulled it up on the t.v.  They were astounded, Gary was astounded, and you know me, I sat there with tears in my eyes.  So without further ado, here is Sir Paul:


Okay, tell me that wasn't awesome. By the way, Paul's new song is epic.  Dude, he's 76 years old and still creating art and rocking.  But oh, for the first time he looks really old, and I felt tender toward him.  Though damn is he fit and slim - it's the vegetarian lifestyle, and I can attest to that firsthand!

Anyway, anything that takes me out of Trump world for a half an hour is pretty fine with me, too.

So going with that theme, Saturday night Gary and I, proudly displaying our VIP passes, stood on the side of the stage at the Dr. Dog concert.  Of course Ms. Natalie Prass (natalieprass.com) was sidestage with us and she graciously joined Dr. Dog for a tune.

But the high point for Gary was being called on stage to play acoustic guitar in "Heart it Races."  What's really amazing is the applause Gary got, but nothing prepared us for what happened when he finished playing...


So how cool was that?

I know these aren't the best quality, but hey, what do you expect from side of the stage recording?

I just love my family so much.  Eric leapt from his drum kit and hugged Gary with such love after it was over...I really do have the best husband/kids in the entire world.

In other news, Julie is still in Nashville.  She flew down to Casa Belew last Tuesday for some rehearsals, recording, etc. and on Friday, the Adrian Belew Power Trio played Sweetwater's Gear Fest.  Adrian lost his voice and one of the campers filled in. I saw a clip and it was pretty damn good, but it's on Facebook so I can't really link it here.  Anyway, Julie will be home tomorrow night, and will be immediately launching into a secret recording project with....her dad!  It will only be made available to select fans the week of August 13 if you catch my drift.  This EP is going to kick serious butt, and if you are lucky enough to get a copy...well, you're pretty lucky.

There's some other crazy good stuff happening in the Slick family so stay tuned....

(I am in such a fantastic head from the weekend I'm trying to stay off social media today so I don't have to read about the Liar in Chief and his racist, idiot supporters)

Peace and love,
xo
Posted by RobinSlick at 8:15 AM