Do I believe it's the last day of June? That is just crazy -- how time is flying by, I mean. But this is a pretty exciting time at Casa Slick, and there's a lot to talk about, so let me try and do it in chronological order. As Dan Gross of the Daily News reported this week:

"Local rockers Dr. Dog will be the musical guest on "The Late Late Show with Craig Ferguson" Friday night, or Saturday morning if you want to be all technical about it. Meanwhile, new Dr. Dog drummer, Eric Slick's sister Julie Slick, will perform Thursday at World Cafe Live (3025 Walnut). She's the bassist in the Adrian Belew Power Trio and will also perform songs from her solo CD that features King Crimson's Robert Fripp and Pat Mastelotto."

What was really cool about the Daily News article is that a LOT of people saw it, including Julie and Eric's elementary school teacher, who actually tracked me down through Facebook and sent me this note, which, yep, I admit it, brought a tear to my eye:

How have you been? I was reading the Daily News tonight and saw "Big Week for Slick musicians". I am so happy beyond words to see Eric and Julie following their dreams!! I just wanted to take a minute to congratulate you on such a fine and unique job of parenting. I have taken lessons I learned from teaching your children and talking with you and used them to raise my own children over the years.

Much happiness always and a big hello to your children!!"

Oh man, how fantastic was that? I sent it off to J&E and Eric actually called me from Los Angeles, he was so touched that a teacher would remember him from 15 years ago. Oh, c'mon. Who could ever forget the Slicks?

P.S. Now I am confused because @drdogmusic just tweeted "tune in at 1115 a.m." I am almost positive they mean "pacific" not eastern, but if you want to be on the safe side, tune in at 11:15 eastern just in case. Sigh...naturally I will not be here then, so fingers crossed they really meant 2:15 eastern since the show originates from California which is where the band is right now. 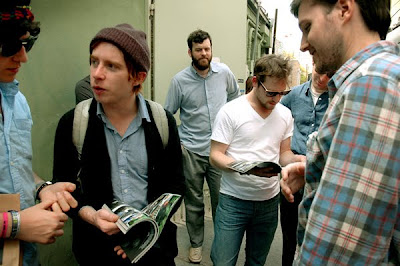 This show may be videocast as well, I'm not positive, but if you click on the above link at the above time, we'll all find out together. But it is definitely a podcast and it should be amazing...I'll tweet and Facebook reminders as soon as they are about to go "live" today. 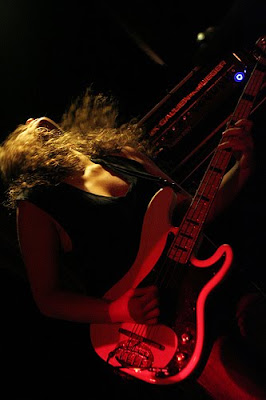 As you probably know by now, Adrian Belew is the Gandalf of guitar, his experimental six-string wizardry a genre unto itself. For nearly 40 years, he’s held his own playing alongside such notable weirdos as Zappa, Bowie and fellow members of King Crimson, and he’s unleashed a batch of solo albums both unorthodox and conventional. In recent years he’s led the acclaimed Adrian Belew Power Trio with Philly’s own Julie Slick (bass) and her brother, Eric Slick (drums). But now that Eric’s drumming in Dr. Dog full-time, the trio is on hold and Belew’s bringing his one-man show—full of improvisation and loops and odd noises and strange gadgets and more—to town tonight."
8pm. $30-$42. With Julie Slick. World Cafe Live, 3025 Walnut St. 215.222.1400. worldcafelive.com -Michael Alan Goldberg

Julie's debut CD as well as the recently released Adrian Belew Power Trio Live in Germany DVD will be available for sale at the show tonight in Teaneck, New Jersey and tomorrow at World Cafe Live in Philadelphia.

By the way, Julie has been getting some amazing reviews for her CD and here's links to some new ones since I posted last:

And here's a fun interview. and another fantastic one which you may have to be a member of Facebook to read, but here's the link to that - it's actually from the summer edition of a print magazine called Limelight.

On Friday night, July 2, Eric Slick/Dr. Dog will appear on the Late, Late Show with Craig Ferguson and I don't know what song they will be performing - I guess we'll all be surprised together.

After that, Eric and Dr. Dog jet off to the High Sierra Music Festival! They'll be performing on Friday night from 9:30 to 11:00PM on the Big Meadow Stage but the really cool show is on Saturday night, July 3, when they will take the stage at the "Funk N Jam House" at 1:30 a.m. and perform "until whenever" which is exactly what it says on the website. Man, I wish I could be there.

And wait until I tell you what the Adrian Belew Power Trio has lined up for July, possibly August (well, I can't write about it until it's confirmed) and the fall. As you know, Marco Minnemann is filling in for Eric, but Julie and Marco may just have a few surprises of their own lined up. Watch this space!

Dr. Dog has some very exciting things going on next month as well, but I will blog about them as they happen or are about to happen. One thing is for certain, you don't want to miss them at the Xponential Music Fest on Sunday, July 19, 2010 at Cooper River Park in Camden, New Jersey...tickets are going fast so click that link!

Oh, one more thing that most of you have probably seen but d'oh, I totally forgot to post it here and it's amazing. Scott McMicken from Dr. Dog teamed up with Shaking Through and Scott, Eric Slick, and a brilliant musician, Mike Visser, worked together on a project called "Springs". This is some fascinating and awesome stuff:

Shaking Through: Springs from Weathervane Music on Vimeo.

And for all you techies out there, here's a video where they discuss how they "made the record"....

Shaking Through: Recording "Waste My Time" from Weathervane Music on Vimeo.

A dictaphone? Where did they even find one of those? Even if you aren't a techie, this is some really interesting stuff.

And finally, to wrap this up, as I've been saying for weeks, I'll be launching the first in my Celebrity Book Club Series and we will start with Tish Cohen'sThe Truth About Delilah Blue.

You need to buy this book. I will be posting my review on July 6, 2010 and then the real fun will begin. So if you haven't already, start reading!

We'll be taking some video of Julie's show tonight and tomorrow so I'll probably be back to post, but just in case life gets in the way, everyone have a fabulous July 4th holiday! But I most likely will post again before then, because I just remembered I forgot to tell you some other things of great importance but I have a 10:00AM appointment and I gotta fly!