Today is International Women's Day. How shall we celebrate? A click on that link should give rise to all kinds of ideas. What I do know is, All Hail Women!

As for me, I'm rejoicing over many, many things here.

First and foremost, Monty dog does have Cushing's disease, which used to be a death sentence. But thanks to recent medical breakthroughs, he is going to be okay, albeit with some heavy duty medication he'll be on for the rest of his life. What's so sad is that other families with pets are not as fortunate as we are. The approximate cost of his medication is equivalent to a monthly car payment. Can you imagine a family not being able to afford that and having no other choice than to euthanize? I haven't been able to stop thinking about that, and you have my word, if I am ever in a financial position to help, I am going to set up a foundation so that no one ever has to lose their beloved pet because they can't afford to treat them. Gah! Monty is my child, and if it meant giving up the writing and returning to working in a law office during the day and folding sweaters at the Gap at night to keep him alive, I'd do it. But that's because I can. Trust me, I know how lucky I am in more ways than one. 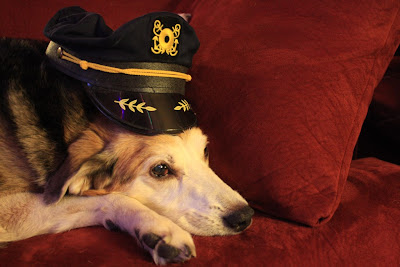 So as you can imagine, after getting that news on Saturday, I was weak with relief. This could have been really, really bad. If it wasn't Cushing's, chances are likely it could have been an inoperable brain tumor. That's how I lost my mother as a young woman and it's a synchronicity I just could not handle.

Yesterday, finally feeling better after weeks of no sleep and worry, I sat down to write. I learned of a very cool magazine called Short, Fast and Deadly with occasional themed issues, and this time they asked for a story which revolved around Sweden. Even better, the story had to be 420 characters or less, with punctuation and spaces counting. So for me, that amounted to 75 words. See? All that time on Twitter has been good for something after all. It's really sharpened my flash skills. So I did a little research on Sweden, read a few very interesting things about their culture, and just ran with it. I played with the story throughout the day until I hit 420 characters exactly, crossed my fingers, and subbed it. Imagine my joy (and shock) when a mere couple of hours later, I received this email:

We absolutely love this piece. Thank you so much for giving us the opportunity to include it in issue 14 of S,F,&D. Below you will find a proof, acceptance notes, and a publication agreement. Please review and return. Welcome to the ranks of the Short, the Fast, and the Deadly.

Let me tell you, as a writer, is there anything better than receiving a note which says, "We absolutely love this piece"? It was like between getting to the bottom of Monty's problems and that, the dark cloud I've been living under all these weeks magically lifted.

In other wonderful news, yesterday and today, Julie, Robbie, and Eric are wrapping up recording of the new Paper Cat CD and they have a very, very cool show in New York City on March 28. Details here. Actually, if you are not a Facebook member, I'm not sure if you can see that or not, so let me do a quick cut and paste, along with an awesome photo of the trio: 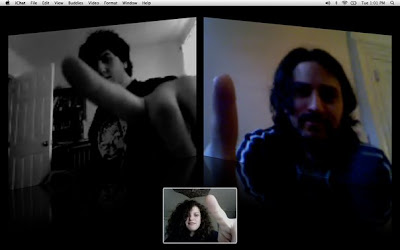 This performance will be the first in NYC for Paper Cat.

Creaked Records (from Switzerland) is hosting the night and also on the bill is Switzerland's OY and SZ/Aphryn's Dismphony.

As we already know, Eric is one busy guy. In a separate post tomorrow or later this week, I will tell you about his upcoming mini-tour with Hop-A-Long and Lithuania...actually, you'll see the dates and venues on Hop A Long's site, but in the meantime, look what's brewing with Dr. Dog:

Shame, Shame is the new album from Dr. Dog (Anti-, April 6). And now, Dr. Dog has built up quite a media onslaught to coincide with their upcoming tour all to promote the new album.

Tomorrow, March 9, "Stranger," the second released song from the new album will premier on Rolling Stone.com.

Apart from being the release date, April 6, will also mark the return of Dr. Dog to Jimmy Fallon's show. They'll follow that up by appearing on Jimmy Kimmel on April 28.

And as if that wasn't enough, there's only about 3 cities in the entire country they won't visit on this tour

TOUR DATES (more to be announced):

Erm, yeah, so Eric's going to be on the Jimmy Fallon Show and Jimmy Kimmel next month. And playing parties in a couple of weeks at SXSW for Rachael Ray, etc. I'm too lazy to link all the festivals he's playing this spring and summer but I promise I'll take care of that in the near future.

And yeah, another single from the new Dr. Dog LP is premiering tomorrow on Rolling Stone.

Life is pretty good for my son. Julie's got some awesome stuff brewing as well but rather than bury that news at the bottom of this post, I'll do a separate journal entry on that as well. Let's just say her debut CD is going to blow a few minds...especially when you see the special guests.

Whew. Not to keep repeating myself, but I am pretty damn excited. Eric's gonna be on Jimmy Fallon and Jimmy Kimmel. I just got that news confirmed a few minutes ago while working on this blog post so I'm a little freaked out.

Time to start posting the billboards...