Let's start the day right with an oxymoron:

Well, the Olympics are finished and now my life can return to normal....i.e...listening to music at night. But like I said, it's been a welcome distraction to worrying about the dog, who seemed very happy and perky yesterday to get a visit from his brother and sister. 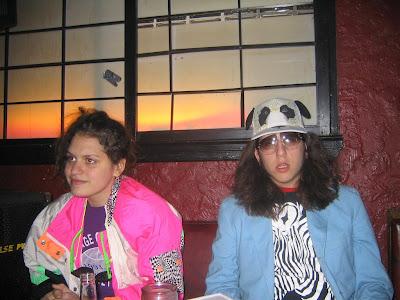 Yep, click away. That's a giant picture of Julie and Eric Slick as baby rock stars, and since they enjoy ruthlessly teasing me as a duo for all of my various faux pas when they come over, well, I have my ways of getting even.

I love my family. But no fair, that two against one stuff! Ha ha, life has a way of balancing out. Wait until they get older and realize they are starting to sound just like me while walking into walls and tripping over their own feet, too. There's no escaping the gene pool, guys.

Anyway, Eric and Julie also came over yesterday because they heard Gary made his famous and incredibly tasty cornbread topped vegetarian chili for dinner and I have pics to prove it: 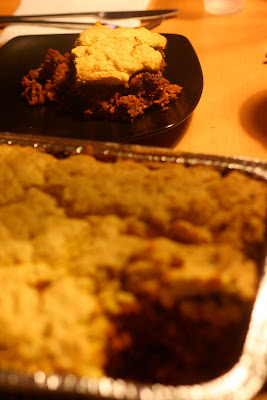 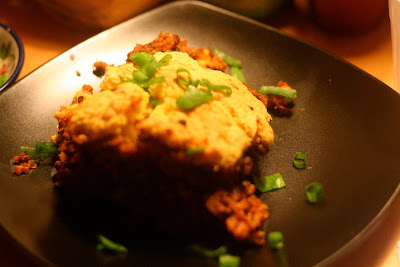 And we'll hopefully get to the bottom of Monty's problems by the end of this week but he's doing pretty damn fine for a twelve year old pup.

Both Julie and Eric had some cool news to share in between making fun of me while they were here - Eric had just come from a photoshoot for his upcoming Goldbug CD which you can read all about here. Not a bad line-up, huh.

Here's what Theo Travis had to say about how this recording evolved:

"More recently a series of small steps has led me to being on a fine album by an international group of musicians that will soon be released. In 2005 I guested on a wonderful album called Snow Bourne Sorrow by the band Nine Horses. Looking through the sleeve notes I noticed a guitarist called Tim Motzer, who I had seen on myspace. We e-mailed each other and became "myspace friends" (yes, I know, I know...) We chatted online about projects we were involved in. He then said that he was doing some recording with Markus Reuter, a touch guitarist from Germany who I had once met in Norwich at a Burning Shed event (the same event I first met Steve Lawson at - but that is another story). He asked if I could contribute to some tracks. I have a home studio so I said yes, sure. That was about two years ago and those tracks have not come out yet, but in June 2009 I played with Gong at Nearfest in the US near where Tim lives, so he came down and we hung out. We got on really well and I liked his vibe as well as his great playing and music. He then asked if I'd contribute to a new project called Goldbug - with the excellent Eric Slick on drums (of the Adrian Belew Power trio) and bassist Barry Meehan. I said send me the stuff and I really dug it. So yes - I overdubbed some tenor solos and flutes and sent it back to Philadelphia over the internet (amazing how you can do that these days).

Last week I received an e mail with the mixed tracks attached including my solos. Well - I was blown away. A mixture of exotic, electronic and natural sounds mixed with great but subtle and building grooves topped with great guitar playing and now my tenor sax too. The music is sonically every rich and powerful but not overbearing - sometimes occupying that interesting rhythmic territory between abstract rhythm and great grooves. Whilst I don't remember my solos being anything special, and my recording equipment is quite basic really, Tim has done such a great mix, that everything sounds fantastic, and the sound of my sax is one of the best mixes I have heard. The full title of the project/ album is called Goldbug-Journey to Eskeopia and Tim describes it as " a journey in groove exploration, textures, and orchestration cut up, mis-aligned, and re-imagined for the wandering ear." Yes indeed!"

So...yet some more great "Slick" music to look forward to in 2010. To my knowledge, there's that, the upcoming Paper Cat EP, an appearance on a live Eddie Jobson CD when they played in Europe/Russia last fall in what I'm loosely going to call the King Crimson Festival but was really not, Julie's debut solo CD which is sounding better by the minute with more and more surprise "guest" appearances by some really awesome musicians, and of course the upcoming California Guitar Trio release where both Julie and Eric appear on two amazing songs. Speaking of CGT, I came across this fantastic You Tube via Twitter of the trio performing with Tony Levin and Pat Mastelotto:

This was filmed at the Quebec Summer Music Festival, and I just sighed out loud. Oh, how I love that city. I actually felt a pang of something similar to being homesick just now...I really need to go back and spend some extended time there. Anyway, that You Tube gave me the chills and I felt the need to share it.

Finally, in Julie Slick news, you may have already seen this on my Facebook page or on Julie's website but she was interviewed by the brilliant Kimberly M. Wetherell over at The Nervous Breakdown:

"I just finished making a Thai Butternut Squash Bisque and confirmed that a friend is coming over for dinner to help me eat some of it."

"What is your earliest memory?"

"Eating a forest green crayon behind the couch so no one could see me. The tangerine one wasn’t as good....""

(But we all know it's probably a hipster bar in Brooklyn. And that's okay!)

I think that's all I have for today but you never know. Ha ha, in re-reading this entry before publishing it, I just realized I should have titled it DGMLive Supplemental and Extraneous News.

Later,
xo
Posted by RobinSlick at 9:22 AM