Erm...not that this is a freaking awesome review or anything *cough*...but...

"...Julie and Eric Slick don't have promising vocations in music because they play in Belew's band, but because they play like they belong in it. e represents the continuation of a long, notable career of one musician and the beginning of what will likely be long and notable careers of two more." (click on link to read entire article - it's amazing!) 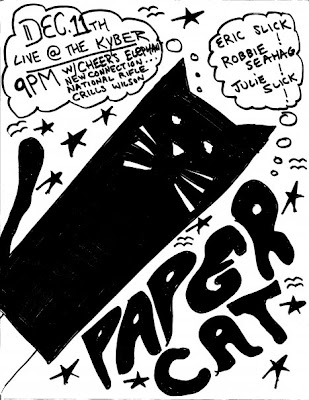 (By the way, that's the cool flyer for next week's Paper Cat gig at the Khyber -- ticket purchase link and info in post below -- and Julie, Eric, and Robbie are busy recording their first studio CD as we speak...)

Oh yeah, here's another review of "e" which also popped up:

..."The most recent release from Belew, titled "e", is more than a solo piece. It is a work by three musicians; the other two of which are equally as skilled as Adrian himself (you have to be in order to keep up with the man). The other two musicians are Eric Slick on drums and his sister Julie Slick on the bass. What the three of them have put together musically for this release is nothing short of impressive...."

In other news, well, it's been an interesting week at House of Slick but after a rocky start, things are looking up...at least today, anyway. Eric is feeling better physically - in fact, he's got not one but two gigs tonight before going back into the studio with Julie and Robbie for the rest of the weekend - but mentally, he's still whipped from all the touring and is taking a hiatus from the road for an undisclosed period while he sorts a few different things/offers out...but in the meantime, I know I mentioned a very cool jazz recording earlier this year -- one of the tunes, "Kosher Klash", a track from the Ayler Records release "Brotherly Love In Philadelphia" featuring Elliott Levin on saxes and voice, Eric Slick on drums and percussion and Jair-Rohm Parker Wells on basses and electronics" is a free download today over at All About Jazz so go on, help yourself, and enjoy!

Eric is also a disc jockey, did you know that? Here's the link to the article over at jambands.com, but I'll paste the pertinent here for your convenience:

Eric as a DJ should be incredible -- there aren't too many people around with his musical taste and knowledge. I'm trying to drag Julie to come with me and make a night of it..i.e., Christmas shopping and general food debauchery in New York City and a nice hotel...should not be too hard to convince her, eh?

In other news, while "e" was on the Grammy ballot for rock instrumental performance of the year, it didn't make the final cut. Here's the five official nominees:

A Day In The Life
Jeff Beck
Track from: Performing This Week...Live At Ronnie Scott's

I predict Jeff Beck will win it but hey, it's a great fucking song, he should. "e" should be among the nominees, but realistically, not that many people knew about it; its not available on iTunes or brick or mortar stores, and other than a few blog reviews like the two posted above, it was virtually unnoticed by the press. Oh well. Not to do a sour grape routine or anything, but this is the Grammys we are talking about and the "Nominee Announcement Show" on Wednesday night was an abomination. Any concert which continually pans to Nick Jonas in the audience...ugh..what more do I need to say...other than on a night where Lady GaGa and Taylor Swift ruled the land...do we really care if the Adrian Belew Power Trio did not get nominated?

But it would have been nice.