The Power of Youth: Julie Slick and Eric Slick in Goldmine Magazine!

If you've been reading my blog, you know that this summer, I went on tour with Julie and Eric and when they played what was my personal favorite show on the "east coast" tour, Toronto, we met Martin Popoff, a rock journalist with some serious creds: Have a look at his published books on the subject!

Anyway, he interviewed Adrian for an article in Goldmine Magazine, and it just came out today. Holy freaking cow, look what he has to say about Julie and Eric: 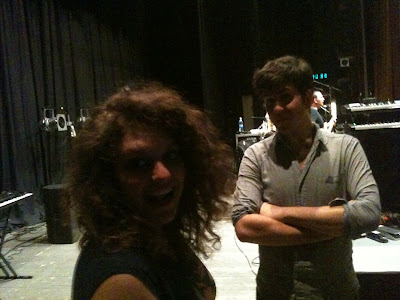 "Consummate axe-skronker Adrian Belew has seen it all.

Touring with the likes of David Bowie, Frank Zappa, King Crimson, solo at various times, and with his very best band (of Cleveland buds) The Bears, this 60-ish guitar innovator has given us so much music of swooping, sterling variety, from the Beatle-esque to the Dali-esque.

But perhaps nothing has felt so literally vital as what the man is doing now, fronting the Adrian Belew Power Trio, alongside brother-and-sister team Julie Slick (bass) and Eric Slick (drums), both in their low 20s, and both possibly the best musicians this writer’s ever seen live.

The trio is an interesting animal, figures Adrian, chuffed that this group has harnessed their energy in a new record simply titled e.

“Yes, well, the format itself, of having a trio … if you are the frontman, the guitarist in such a thing, it allows you a lot more freedom,” says Belew. “In the case of the power trio, I try to make it so we have places in the set, and during certain pieces of music, where we kind of improvise and change from night to night.”

“I think the power trio format, for a guitar player, is just wonderful, especially if you have two great young musicians like I do (laughs),” says Belew. “I think Eric and Julie’s role is to bring the youthfulness, the energetic qualities to the band that are so attractive. Of course, their playing is amazing, for their ages, and really, for any age. But for me, those two things combined make a pretty powerful thing."

Belew also has taken on another job with this group that’s proving to be tough.

“Maybe the last thing is, as kind of a producer/arranger, I’m enjoying the role of taking on material that should be difficult for three people to play — maybe songs that were played by four or five people, or even six, in the case of the double trio King Crimson material,” says Belew. “So that’s challenging, too. You put all that together, it’s a hot little package (laughs).”

Did Adrian ever wonder, looking back, that if players like Eric and Julie had been around when he was sprouting his wings, if he’d have been left in the dust, that he “never would have gotten the gig” so to speak?

“I never really thought about it that way, although that’s possibly true (laughs),” says Belew. “I always thought you got the gigs you got because you were ready for that, and you stepped up to the plate and did well. But it does impress me, and interest me quite a lot, to watch their progression as musicians and as people. And as young people seeing things that I saw for the first time — I really enjoy that part. Like when we go to Russia or Australia or Japan, somewhere that I’ve been many times, and it’s their first time, or even their second, I can kind of remember how I felt.”

Being siblings, Julie and Eric have a different way of approaching music.

“It’s different the way they view it and process that information, first of all, because they’re brother and sister,” says Belew. “So they always have a companion (laughs). They even like to share the same room; they don’t even like to have separate rooms. They’re always on the computer together, and that’s just the way they are — they grew up best friends. That makes one big difference. Because when I went out and toured the world the first few times, I was pretty much on my own and had to accept things and discover things in a different way.”

And together they’ve made … e?

“Way back when I was a kid,” says Adrian, by way of explanation, “I used to do drawings of a cartoon character I made up called e, and it was a lowercase e, and I would draw things in high school, and there would be these cartoon pages of this guy. So I don’t know why. Now the letter e, especially lowercase e, appears in a lot of places — e-mail, eharmony or whatever. But I always thought of just a nice simple title — e; it’s a letter, it represents a lot of different things, it’s the beginning of a lot of different words, it’s a very strong graphic — just the shape of an e.”

The album features many of the usual Belew tricks, as well as his latest hobby, looping.

“Maybe seven years ago I began this form of looping,” he says, citing it as a key impetus in this album’s creative process. “You play something into your looper and it’s repeated over and over, so it therefore adds another guitarist for you to play with.”

Fortunately for us, all of this can be witnessed live, as the Adrian Belew Power Trio tour fairly extensively worldwide. And be sure to keep an eye on drummer Eric, whose speed and deft touch can be mesmerizing, which leads one to ask, how much more could he possibly improve?!

“Well, actually, I would say, you’re right,” laughs Adrian. “I would say I’ve watched him progress, is more correct, because, you know, I don’t know much further he can take it. What is so impressive to me about it is, yes, now he’s got the mechanics, got the chops, he can do all kinds of amazing things, but it’s his tastefulness. It’s way beyond his years. And the same with Julie. I mean … it’s kind of mysterious how these two young people get to this point where it usually takes someone 40 years to arrive at (laughs).” 

Stay tuned for a TON of exciting news about Julie and Eric Slick, by the way. Now that they are finished touring with Adrian in 2009, they have many, many exciting projects lined up with other musicians and the news just may be of a very surprising nature indeed.