I've never been so homesick in my life.

Okay, so it does look like I'm having a good time catching some rays and reading a fantastic book (Nobody's Fool by Richard Russo) in Redondo Beach, California, that is true: 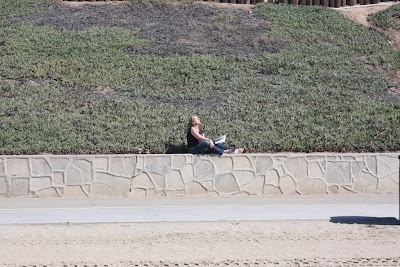 Though I was seriously terrified when leaving Phoenix for Utah when we had to make a bathroom stop and this was the only place for 400 miles.

"You ladies have come to the right place," the men outside said when Julie and I walked by.

Oh. My. God. Inside, they had hand printed signs that they'd "cut and freeze whatever animal you'd shot and killed." It was a combination gas station, convenience store which sold saddles for fuck's sake, and a bathroom which was so disgusting I sat about 12 feet in the air above the toilet. But the best was it was also a saloon, and they had five dusty half-empty bottles on the shelf: Tequilla, Wild Turkey...hmm...that may be it. I am a city girl but I was positive Julie and I were going to end up chopped in little pieces in the walk in freezer, later to be identified by our dental records, assuming they didn't eat our teeth, too.

"We should have told Adrian and Eric if we're not out in ten minutes they need to come in and rescue us," I said to Julie.

She laughed. We both knew we'd be the ones to rescue THEM.

But it was cool. I don't know if you can see it in this photo, but it was such a cliche. Everyone wore cowboy hats and there was even an ancient hound dog snoring outside with flies buzzing around his head. 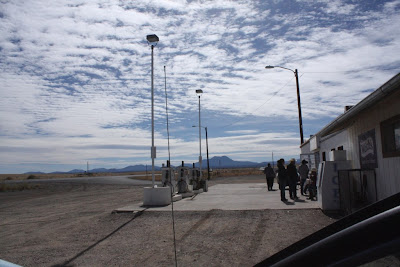 But then we got a really cool surprise. When we punched the address of our next destination into the GPS system, it told us we would be going through the Grand Canyon. Are you kidding me? I got little kid excited.

This is just the beginning of what turned out to be the most beautiful drive of my life, and I thought that had happened two weeks earlier when we drove through Jasper National Park in British Columbia (see post below). 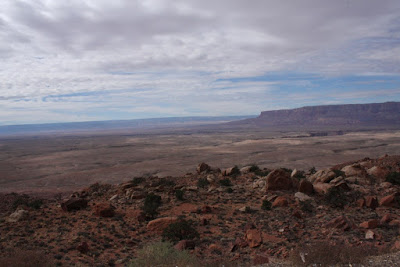 And here is the official Adrian Belew Power Trio shot taken adjacent to the Canyon - the first time Julie ever approved of my photography skills: 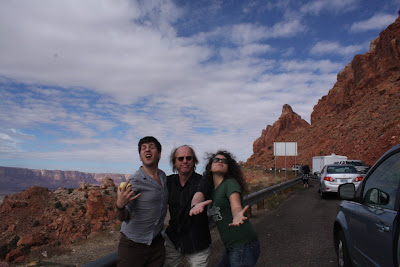 Well, duh, I had to have my photo taken as well. When the fuck am I ever going to get to the Grand Canyon again? 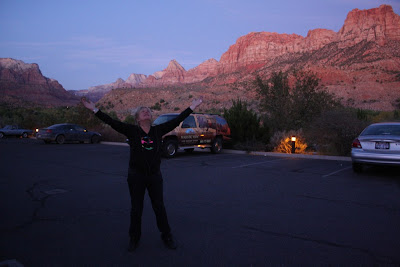 Erm...actually, that's not the Grand Canyon. Now that I carefully look at that pic, I think it was taken in the parking lot right outside of Zion National Park in Utah a few hours later. Oh well. Whatever. Most gorgeous drive/destination EVER. And if you don't believe me, have a look at the rest of the photos from our Utah gig: 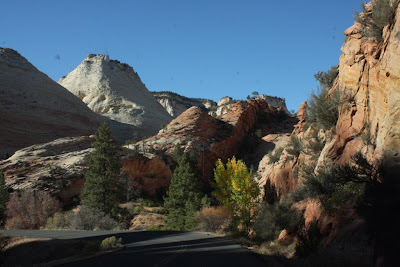 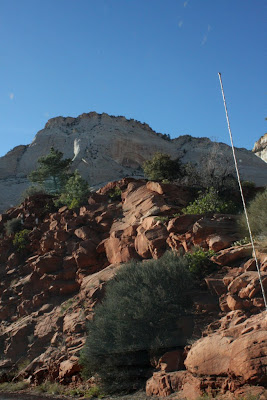 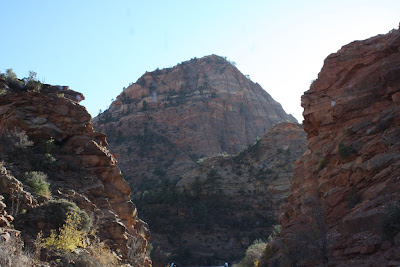 Here's a shot of both Eric and me in the parking lot of the hotel where we stayed in Springdale, Utah...it was called Majestic View and yes, it was the most magnificent view ever...but the lodge, oh the horror, inside it was taxidermy heaven...I looked away from the big stuffed bear and various deer heads but when I saw the tiny stuffed mountain lion hanging on the wall in the restaurant where we had breakfast, I gagged and was once again proud to be a vegetarian. If you click on the photo of the lodge Julie took and enlarge it, I believe you can see pretty clearly what I'm talking about. 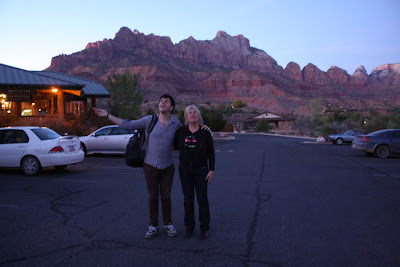 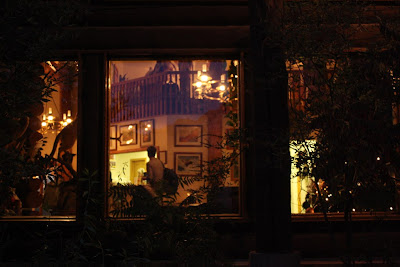 The Bit and Spur in Utah where the trio played that night was another one of the more pleasant surprises of this tour. Not only was it incredibly gorgeous, it was a Zagat rated restaurant which catered to people who liked their veggies, and owned by two really cool, laid back guys who came to Springdale via LA and Chicago...they went on vacation to Zion National Park, were mesmerized by its beauty, and decided to stay forever. Their place boasted an outdoor deck which faced the mountains no matter where you sat; the sky was so starry we could see the milky way, and have a look at the menu. We started off with the evening's special, a coconut, ginger, carrot bisque; I followed that with butternut squash canneloni -- thyme roasted squash with spinach, shallots, goat cheese and heirloom tomato sauce with field greens and balsamic vinegar. Actually, we all had the bisque; Eric followed that with the roasted pecan fall salad and Julie had a (non-meat) soft taco special.

Naturally Adrian had the strip steak, but maybe some day he'll join our team. Or not. Whatever.

In my next post, I will show you photos of our dessert as well as a more comprehensive write-up of the wonderful meals we had on the road as promised, but for now, it's time to leave Aspen and head for our final show in Littleton, CO at Toad's Tavern where once again the band is listed as "Adrian Belew" and not "Adrian Belew Power Trio" and there are no photos of Julie or Eric on the poster...are you sensing my frustration here? I don't think I'm being out of line after three and a half years, do you?

Oh well, I guess I'm just exhausted, cranky, and frustrated because I'm ready to go home and work on my edits for my upcoming book and really dive into the new one.

Anyway, I digress. Getting back to our tour travels, after we left Utah, we headed for Aspen, and get a load of the scenery on this drive - we stopped a couple of times to take photos: 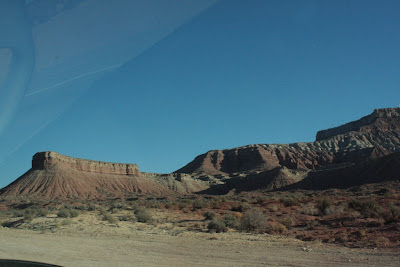 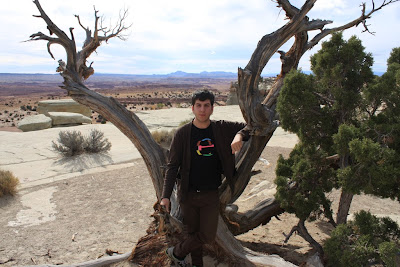 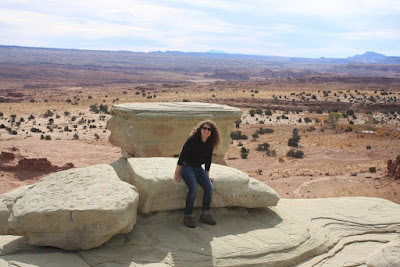 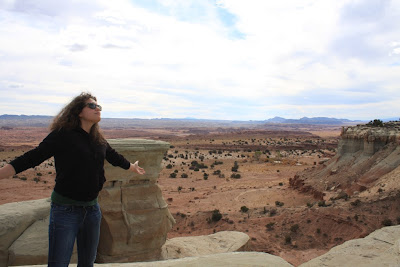 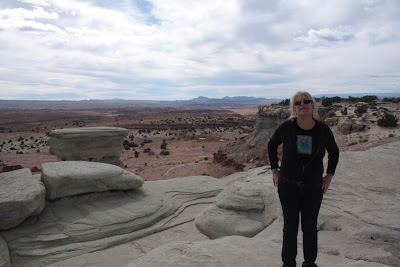 If I were to tour with the trio again, and trust me, I'm not, I would have to get a t-shirt printed up which says 'YES I AM" because at least fifty people say the same thing to me every single night after the show: "You must be so proud."

Of course I am so proud. But not just of their musicianship - I'm proud that Julie and Eric are honestly kind and decent human beings and everyone they come into contact with notices it right away and comments on that to me as well. My God, they are both so humble and three and a half years on the road with Adrian has done nothing to change that; if anything, they are warmer and sweeter and more intellgent than ever because they've traveled the world and gotten to see how the other half lives in more ways than one. And when I say "the other half", that refers to people who bicker, people who think money is the key to happiness...you know...all the petty bullshit that I personally have no time for. I think Gary and I should be proudest of the fact that we did pass that on to them in addition to supporting them in every way imaginable and giving them the confidence to know that anything is possible. Maybe it's because I lost my own mother as a young girl; maybe it's because Gary has been to hell and back himself and it's made him so much stronger and such a wonderful father...but yeah, J&E have their heads screwed on straight and after spending most of the summer in such close confinement with them on tour, I admit it, I've never been prouder of anyone in my life and I never will.

And speaking of that, here's a fantastic interview with Julie Slick. My thanks to John Wilcox of Prog Sheet -- I hope you all enjoy this piece as much as I did.

Do you believe this tour has had us traveling in a minivan almost 7,000 miles across America and Canada in 21 days through snow, sleet, treacherous mountain passes and ten hour drives after which the trio has to perform without a day off? So much for the rock star life, huh. My brain is exploding and heiny hurts!

And on that note, I think I will end this post...I cannot wait to go home tomorrow...but ugh, our plane has stopovers and even though we take off at noon; we won't be home until 9:00 p.m. It would have been nice to have a direct flight but there you have it...welcome to the music biz, 2009...or at least as we know it at present.

Oh well. As I always say, onward and upward!