So my curly hair is back and woo hoo, I've only owned it since Christmas but I finally know how to work some of the basic features on my new macbook. I managed to take this totally raw, untouched picture of myself today...and I'm excited because it just may be the only good photograph of me in existence now that I'm an old broad so I'm stoked to see I've still "got it". Well, at least a tiny glimmer of "it". Whatever. I'm just glad I at last have something I can use for bio pages for all of my various haunts and projects which actually looks like me. I'm not kidding when I say I am so unphotogenic that more than one person has remarked "Wow, you are so much better looking than your pictures." 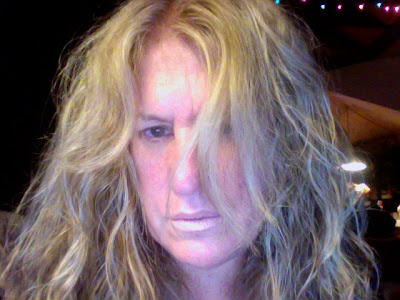 Okay, okay, so I'm not a super model but at least I'm not a two bagger (one for my head and one for your head in case my bag falls off).

Anyway, I'm in a great mood. My muse has returned in full force and I'm working on two books at once, maybe more. A random email that went around my publisher's loop asking about authors who wrote series got me thinking that the Three Days in New York City trilogy is still not done. When Bitten to the Core comes out this December, I not only leave another window open for a sequel but grew to love one of the new characters so much that I suddenly got a strong urge to do a spin off for him/her. (Sneaky, aren't I?) So that will bring the series to five books and who knows what will happen once I start writing the novel featuring character #2. Also, to add to the fun, out of nowhere, I've regained enthusiasm for what started out as my first YA book but quickly realized -- due to usage of the word "fuck" 37 times in 100 pages -- that it would never qualify for Young Adult though still a coming of age story; anyway, I'm on a roll and quite happy. It also means that when I go on tour for three weeks with the Adrian Belew Power Trio, I will be in my room writing on the laptop during down time which suits me just fine...in other words, I won't get in the band's way.

And in other good news, at my request, and I can't believe that I did this because I am always adamant about print books over e-books...well, I realized I've lost the war and the entire modern planet now owns Kindles, Sony Readers, iPhones, etc. because they are cool! I am not going to relive 1990 again...i.e., when I walked into Tower Records all dazed and confused. "But...but...where's all the albums?" Overnight, it seemed, the world had changed and I was like some bumfuck nitwit without a clue and more importantly, without a CD player. Anyway, what I'm trying to say here is that Daddy Left Me Alone with God will be available on Kindle in the very near future and also in other e-book formats. I've decided to join the 21st century in this regard enthusiastically after all and I'm not even kicking and screaming. In fact, I'm going to get myself a Kindle because I am a voracious reader and I can't be bringing 500 books with me when I do things like go on three week tours...it blows my mind that I can instantly have any book I want, 24 hours a day. The concept is amazing. 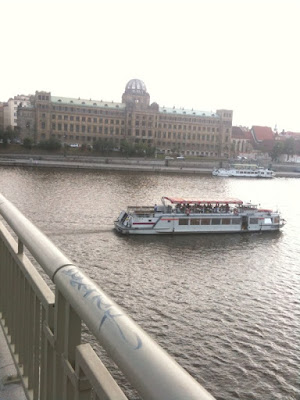 And then I checked out his hotel, and found this photo on my own - it's adjacent to where he's staying, as is the photo of the river he sent: 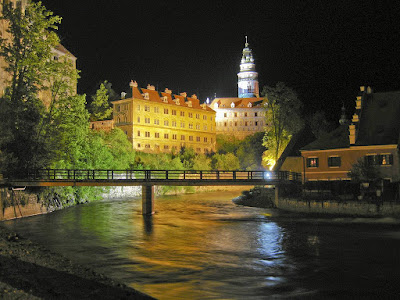 There was a nice little article about Project Object and their show in Prague tomorrow night which popped up...in fact, Eric made the news twice, though the second article managed to have what is becoming an alarmingly frequent journalistic mistake...this time the damn Philadelphia Inquirer, published in the city where he was born and raised, managed to fuck up his age and say that Eric is 19. Eric is 22. What do they teach these kids in journalism school, anyway?

So yeah, Eric plays Prague tomorrow night, then heads to the Netherlands. He's living the dream...well, Julie, too, that is for sure.

By the way, I heard the recording from the show on July 15, 2009 at John and Peters in New Hope featuring Eric Slick, Julie Slick, and Robbie "Seahag" Mangano. It is amazing! Julie is busy producing/mixing/mastering or whatever it is she does and there will be a CD of the show available any day. Those three musicians are so good it's sick! It's also magical...when you hear it you'll know what I mean.

Hey, speaking of truly magical CDs, great reviews continue to pile up for "e', and notice the new banner at the top of my blog here? It's a direct link to Adrian's website, where you can purchase the new CD, signed or unsigned, rare CDs and downloads, as well as your very own e-shirt. Or, you can get your e CDs and e-shirts from me on tour starting August 21. We can even take our pictures together with my macbook har har. But about those reviews...

"I haven't heard the Power Trio live yet (maybe next time they come to Carrboro), but I have Side Four and also Live Overseas, both of which are outstanding. But even with those high expectations set, "e" is blowing me away.

The comparison that has to be drawn is with King Crimson at its heaviest and most experimental. This is all instrumental, with none of Adrian's pop tendencies showing at all. There's very little here that feels like improv or "ProjeKct" work, though; the playing is very tight and high-energy.

I can't say enough good things about Julie and Eric Slick. Both as a pair, and also as individuals, they stand up very well in comparison to any of Crimson's rhythm sections. Eric's drumming is highly inventive, with driving polyrhthms that come as naturally as breathing. Julie plays her bass like a lead, and she's fully capable of matching Adrian note for note. Their unison runs are simply marvelous.

Adrian, of course, is Adrian. The liner notes say that this is performed live in StudioBelew, but I can't imagine how he's doing some of this stuff live. There's got to be two of him somewhere! This is his best work in quite some time, which is not to suggest that he's been slacking off anywhere along the line. It feels more like the Power Trio is bringing out the best in all three musicians, and I can't wait to hear more."
*****

"This puppy is easily the best Crimson to come along in quite a while!

The e-shirt is very comfy. I slept in mine last night."
*****
From Planet Crimson:

"On the first listen, I liked it okay. Maybe I just wasn't in the mood.
On a second listen, I was grooving to it.
On the third and fourth listens I was digging it.
Fifth, sixth, and seventh listens, air-trio rocking to it.
On the now eight listen it has me grinning like a baboon."
*****

"I hear so much Crim in this release. Much more than any of Adrian's solo stuff. I have to wonder how much (if any) of that is deliberate. Do you think this could be a musical statement of sorts? To me it sounds like Adrian letting folks know just how large his contributions to King Crimson was (is?)."
*****

"I doubt Ade specifically intended to make that kind of statement and I doubt he really has anything to prove in that regard. I think that's just the direction the muse has been going.

Any group propelled by such a powerhouse rhythm section is almost inevitably going to reach Crim-like levels of intensity anyway..."
*****

So that was some interesting commentary and as usual, I'll add to them as I find them. It's nice to see intelligent conversation and various fans' thought process here...it says a lot about the CD.

Oh, and once again, for all of those who are asking about the absence of a track list on e, here's Adrian's official explanation:

"e" is actually one 43-minute piece. but I sub-divided it into 5 sections (a,b,c,d,and e) and further into sub-sections when necessary. for example "a" has 3 different sections so one is called "a" one is "a2" and a third is "a3". I really would have preferred to have NO track markers: one big piece. but for those listeners who would perhaps want to skip a certain part I made it into 11 different tracks.
they are:

Hey, thanks to everyone who has been sending me "where to eat" suggestions in all the various cities I'll be visiting on tour. They are most appreciated and of course I will be blogging from said tour every day so I'll be providing you with daily reviews and photographs. I'm going to try and do it mostly vegan, though, with two exceptions...Quebec City where I will eat whatever the hell I want because they have some of the best food in North America, and Annapolis for the alleged world's best ice cream. (My whole family has had it two years in a row...I have never even been to Annapolis...and they've been torturing me with it ever since.)

Speaking of that, my own daughter just sent me an email including those very words "Just to torture you" in the subject line and this of course contained a link for the flavor page. Good freaking lord - coconut nut ice cream?

So here it is Friday night and now I feel like I'm part of Amanda Palmer's Friday Night Loser Club because it is 9:00 p.m. and I'm doing a fucking blog post. Julie's significant other, Matt, bassist for the band she produces, Cheers Elephant has a gig tonight at 11:00 p.m. at The North Star Bar in Philadelphia...if you are in the area, you can still make it in plenty of time and I highly recommend it.