Well, you know it's going to be a good day when you wake up to this:

"...In this case Eric Slick, one hell of a drummer whose name probably will be only whispered in a couple of years because everyone will be scared of his talent. Yes, he is that good and currently touring with Project Object, if I am not mistaken." 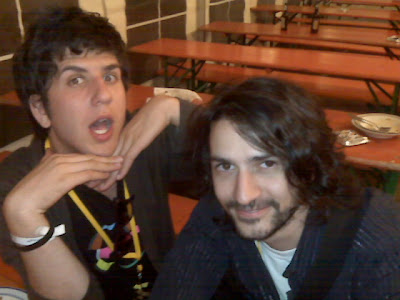 You can read the rest of that "Eric Slick is one hell of a drummer" post here though I pasted in the best part.

And notice that Eric wore his e-shirt whilst performing in Germany. The boy's got style!

So today I run around frantically realizing that tomorrow I leave for tour, and while said tour lasts until September 12, I will be back in the Philadelphia area on August 26 for the Sellersville show, the CD release party at Rembrandts on August 27, and the World Cafe Live show on Monday, August 31. Of course in between those dates, I'll be in New York and scenic Hoboken, New Jersey, but after that, it's two solid weeks on the road...oh, poor me, I get to spend two days in Cape Cod and another two in Quebec City...life is just so, so tough.

But I do have to laugh. So far, the Adrian Belew Power Trio has been involved in earthquakes, typhoons, possible tsunamis, blizzards, ice storms, and flying metal (you'll have to go into my February, 2008 archives for that one) while on tour...this time it seems Hurricane Bill may be causing some mischief -- I just hope my plane to Nashville tomorrow evening isn't affected. Though really, we've had vicious thunder and lightning storms here in Philadelphia almost every evening, and there are more expected both tonight and tomorrow, so that alone will probably have an impact. Oh joy, my favorite. Flying in turbulence. Arghhh.....

So who wants to see Dr. Dot performing her whole wet t-shirt routine with Eric Slick and Project Object in Berlin last Thursday night? C'mon, you know you do. You can thank me later.

And it would not be a complete blog post if I didn't mention @julieslick. I stumbled upon two pages of lovely forum comments about her over at Talk Bass, and here's just a couple of comments (but click on the link, I can't post them all)...

"That's her brother Eric on the kit. Badass players, she rips that P bass."

"dang. she knows her way around the neck, fo show. awesome. reminds me a little of Andrew Weiss (playing mostly, but the hair too.), which is intended as a compliment as i love his playing. and his hair."

These comments literally go on and on, but that was a very nice taste, yes?

I told you this was a good morning!

Will it be as great as yesterday, though, when Philadelphia's best and brightest radio station, WXPN, played a track from "e" (e2) on the radio yesterday? I almost had a heart attack! I know I'm a big dork, but here's proof - the playlist for that morning, and woo hoo, was the trio in great company!

11 am
Snow Patrol - Take Back The City - A Hundred Million Suns
Robin Trower - Day Of The Eagle - Bridge Of Sighs
The Bird And The Bee - La La La - The Bird And The Bee
She & Him - Please, Please, Please, Let Me Get What I Want - Music From The Motion Picture - (500) Days Of Sum
Spoon - Got Nuffin - Got Nuffin - EP
Feist - 1234 - The Reminder
Phoenix - 1901 - Wolfgang Amadeus Phoenix
Santana - Smooth - Supernatural
Adrian Belew - e2 - e
John Mellencamp - Check It Out - The Lonesome Jubilee
Imelda May - Johnny Got A Boom Boom - Love Tattoo
The Wolfgang Press - Going South - Funky Little Demons
The Police - Don't Stand So Close To Me - Zenyatta Mondatta

You realize I can never turn XPN off ever again, right? I was shaking for three hours after they played it. In a good way, that is. But yes, it was totally surreal to hear my brilliant offspring on the radio.

Anyway, I should not be blogging. I need to do wash, pack, and a million other things. But I know me, I'll still be stalking the web throughout the day, and as always, will be back if anything interesting pops up.

But if not, see you on the road!

Later,
xo
Posted by RobinSlick at 9:15 AM