So I've noticed I've been giving out the same advice to a lot of friends and family in the past few days, namely, if you let negative people get to you, you give them power. So don't let it happen!

Unfortunately, I haven't been following my own advice. Therefore, today's blog post will deal with only the positive. And I'm lucky, because there's a lot of really great stuff going on. 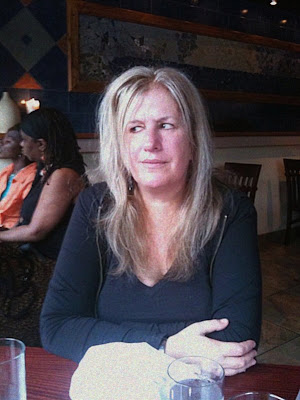 Now I know I look skeptical about this plan in the above photograph, but I'm also posting it for a couple of other reasons even though I am the least photogenic person in the entire universe. One, because it was taken Friday night when I was...gasp...actually enjoying a vegan meal with (twitter promo whore alert) @julieslick and @mrericslick and two, because my curly hair was beaten into submission by the fabulous Shari Sigafoos which is such a rare event -- a good hair day, I mean -- that I had to have Eric snap my pic with his iPhone.

Okay, then. On to Robin Slick's official Don't Worry, Be Happy post for Sunday, August 2, 2009. May this era of good feeling last throughout the year.

Moving on, let's start with two of my best writer friends, Susan Henderson and Ellen Meister. Susan just got a book deal! Hurrah! You can read all about it by clicking on her name, or by visiting Publisher's Weekly (where they have it wrong: the book takes place in the 1970s, not the 1950s, but we'll forgive them because they have such nice things to say about Sue).

And Ellen, who sold her latest book via auction to Putnam, recently learned that her novel, The Smart One, is one of Ten Summer Beach Reads over at Womens Day Magazine! Having read the Smart One, I think it's a fantastic novel, period, incredibly intelligent and witty, just like the author herself.

How cool are my friends?

While I'm on the subject of writers, I need to talk about Sarah Pinborough. Sarah is someone I met randomly on Twitter and love because she uses expressions like Good Cunting Christ's Cock (I did tell her I would steal that line and this post doesn't count)...anyway, I was intrigued enough to order her new novella, The Language of Dying, which I just read in one sitting. I don't even know what to say about this book, anything I write is not going to give it justice. Sarah is a master storyteller. I was absolutely riveted by the voice of the narrator, a middle adult child surrounded by her four siblings at their father's deathbed, each of whom has a past and present which has led them to madness -- a madness which manifests itself in unique, subtle, and not so subtle ways. I am in awe of the fact that Sarah seems to effortlessly offer up such vivid, memorable description and emotion using so few words. This book is beautiful, it's chilling; it's tragic...and its ending kind of sucks the air out of you but not in a horrifying way. Anyway, you need to read it. Immediately.

And before I leave the topic of, um, authoring, I have yet another new book cover (this now makes three) for Bitten to the Core, which is scheduled for a December, 2009 release. It's been a strange odyssey for this book in general, which was originally intended to be used for an HBO series (sob) but believe it or not, this was the first cover I originally loved so it all worked out in the end...well, except for the HBO series, but hope springs eternal and all that. 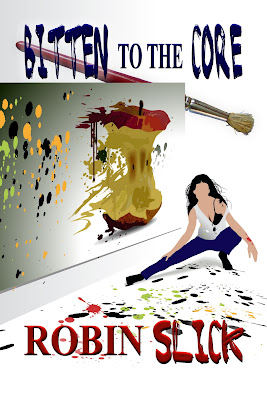 Awesome, huh? It was created by Alessia Brio.

Okay, and now moving on to music because, d'oh, that only consumes the other 50% of my life, the reviews are starting to come in for the brand new Adrian Belew Power Trio's CD, e. But first, as my pal Sid Smith would say, your moment of Penston: 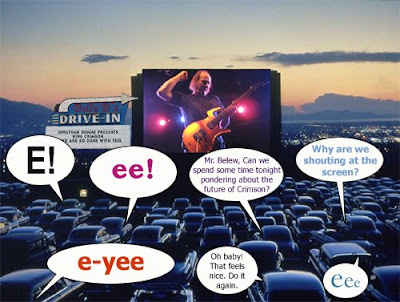 Ha ha - I'm not even going to try and analyze that cartoon. But love it I do.

From the Planet Crimson forum board:

"I've listened this a few times now, and above all I have to say this is a gutsy release. One 42.5 minute instrumental (broken into 11 tracks). I thought there were 5 parts, for some reason--perhaps not, or perhaps the further breaks are for convenience. (The sleeve notes are very minimal.)

If any Adrian fan keeps away because there are no vocals, well its his or her loss. This is no avant garde or third stream work, but a logical continuation of the Trio.

The playing here is excellent throughout--the Slicks just keep getting better, and they have plenty of room to show their stuff here, while Adrian is like a one-man guitar army.

As for the sound, very composed, with lots of room to stretch, and while very much a new and forward looking piece, it at times, not surprisingly, recalls the instrumental parts of the "Sides" and Adrian era Crimson, particularly "The Construction of Light" intro.

Well worth your time and cash. If anyone had told me 10 years ago that I would soon again be awaiting solo Belew releases with excitement, I wouldn't have believed it.

"I've only listened once so far, but those are exactly my first impressions too. It'll obviously take some good time & attention to digest further."
*****

From Mike Inman of Notes of The Optic Nerve:

"Adrian single handedly introduces us to “e” with “a” which is a rather captivating coming attraction, that not only inspires us to listen through to the end, but captures our desire to do so, by the tail.

This is the first studio album that Adrian uses his band mates Julie Slick on bass and Eric Slick on drums. As we get our first glimpse of this trio together in the second track it harkens back to sounds reminiscent of Neurotica. Not enough to be pastiche but just enough to gather King Crimson fans together for a thorough listening of Adrian’s favorite new project.

A personal favorite of mine is the way that Eric makes use of the most simple drum kit yet together with Julie on bass they drive this trio like the force of a thousand elephants storming across the African plain. There is something animalistic about this group they seem to capture my attention at every twist and turn of this journey called “e”.

This studio recording of Adrian’s really captures the spirit of the live shows. The way Eric rattles around on the edges of his kit and Julie fills out the bottom end of this with her fierce definitive style of bass. It really gives one a sense of just how cosmically talented the other two thirds of this trio are.

Eric often enters into the layers of Adrian’s guitar with a bombastic drum riff and out of the blue Julie soars onto the scene from the bottom end of the spectrum. The true talent of this lineup of The Adrian Belew Power trio is heard for the first time in a studio recording and what a recording it is..."

You can read the rest of Mike's review here.

So as I stated in a post a few days ago, this Tuesday night is going to really rock when Eric joins Stretch featuring Dave LaRue and Glenn Alexander on stage at Silk City. That show is going to rule! There's a cool poster for this event floating around and as soon as I can snag it, I'll post it.

Also, for those of you who've asked about the future of the Eric Slick, Julie Slick, Robbie "Seahag" Mangano project following their brilliant gig at John and Peters (and click on that link for some really great photos of the band)...anyway, the answer is Yes, it's a go, as soon as Julie and Eric are finished the August/September run with Adrian, they are going into the studio with Robbie and will start booking some shows during their down time with Ade. I may have mentioned this already but I'm torturing both Eric and Julie with names for the band...they did not appreciate "Seaslick". Ha ha, wonder why. In the meantime, there is a slight possibility that there may be a CD sooner rather than later from the John and Peters show but that will depend on a bunch of stuff...again, I'll let you know as soon as I get word. But for now, both Eric and Robbie leave for Europe this Thursday to tour with Project Object, which run will feature special guests ranging from Denny Walley to Robert Martin to Napoleon Murphy Brock to Dr. Dot and trust me, trust me, trust me...if you are a new reader to this blog and have never done so before, YOU MUST CLICK ON DR. DOT'S LINK. Ha ha, you can all thank me later. My lucky son will be getting a massage from this woman whilst in Europe. Oh, and take a look at the hotel this poor boy has to suffer through when he plays in Spain...here's a small photo I lifted but to see the rest, click on the link I gave you for the hotel. 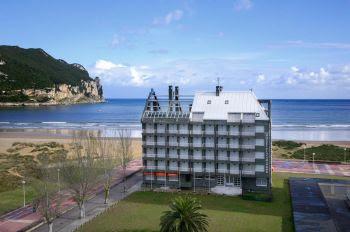 Such a tough life my son has. Here's the entire European line-up, or where Eric gets to spend the next ten days (He leaves on Thursday, August 6 and will be back home Monday, August 17...hopefully just in time to celebrate my birthday with me as that is, alas, the big day)...then two days later leaves for the three week Adrian Belew Power Trio tour which will take him from Knoxville, TN to Quebec City and more...

Saturday, August 8 - Czech Republic: Prague
Sunday, August 9 - Netherlands: Eindhoven Effenaar
Tuesday, August 11 - Spain: Polideportivo Municipal Emilio
Thursday, August 13 - Germany: Berlin Dot Club (where they will be joined by Dr. Dot!)
Friday, August 14 - Germany: Bad Doberan Zappanale 20, also featuring Dr. Dot, who is going to re-enact her role as the wet t-shirt girl in Joe's Garage...the photo of which I posted two years ago and received a stern warning from Photobucket and Blogger so I'm not going to make that mistake again but I'm sure Dot will post pics on her MySpace page after the fact...hahahaha..she's great...I can spend hours on her site and still find stuff I didn't see before.

Oh yeah, almost forgot. When Eric finishes up his tour with Adrian, he also has a gig with this guy. Holy freaking cow.

Anyway, I think that's it for the moment, but what do I know. Same drill as usual...if more stuff pops up between now and the next post, I'll be back to edit and add.