An Interview with Mr. Belew

From the folks at Rock Om...a wonderful interview with Ade: 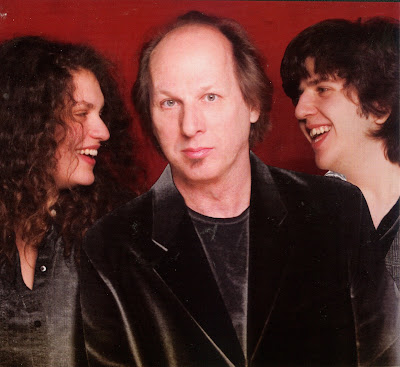 An Interview with Adrian Belew (Part I)
By Tom Crenshaw, tom@rockom.net

Guitarist, songwriter and vocalist Adrian Belew has been at the art and craft of reinventing, innovating, and redefining the term "cutting-edge musician" since 1977. That was the year Frank Zappa walked into a bar in Nashville and first saw him performing on stage and subsequently invited him to join his band. Since that time Adrian has been an integral player in Rock and Roll history, spending time performing and recording with the likes of David Bowie, King Crimson, The Talking Heads, Paul Simon, Nine Inch Nails, Tom Tom Club, Tori Amos, and Herbie Hancock to mention a few.

Now Adrian Belew has a new band, the Adrian Belew Power Trio, who are beginning a new tour performing up and down the east coast and Canada starting August 21st. The Power Trio consists of Belew along with brother and sister rhythm section powerhouse Julie and Eric Slick on bass and drums.

RockOm recently had the honor of speaking with Adrian Belew about his prolific career. Starting with his teenage days spent learning songs by the Beatles, we move on to discuss his discovery by Zappa, recording and touring with David Bowie, his time with King Crimson, recording on Paul Simon's Graceland CD, and his new Power Trio.

In Part One of this interview RockOm brings you Belew’s thoughts on the new, just released Power Trio CD entitled E. Belew also expands on how music connects others and energizes both musician and audience, as well as how there is a spiritual element to performing that’s "unexplainable".

RockOm: E marks the first studio release by the Adrian Belew Power Trio. What inspired the music for the album?

Adrian Belew: I started writing this music three years ago. It’s been a very lengthy writing process because I first developed a kind of motif, a musically chromatic motif, and the more I worked with it the more ideas I got from it. It went from being one song or piece to being a lengthy piece of music in five sections. In working with and doing a lot of touring with Eric and Julie Slick [Belew's band mates in the Power Trio] over those three years, my relationship with them was growing and I felt inspired to try and write something that worked exactly for the Power Trio. I didn't want it to be songs; what I wanted to show was that muscular musicality and the ability of this three piece band.

RO: You’ve toured with Eric and Julie for several years now. What will make this tour different from the others? What can the audience expect that’s going to be different?

AB: First of all it will be the first tour where we play much of the material from E. In fact I’m hoping that somewhere along the line we’ll have enough time to rehearse during sound checks where we'll be able to even perform the whole piece in its entirety. Also, every tour that we do I try and introduce one or two new wrinkles, such as another "new" song from the past or a song from the King Crimson catalog, something that keeps everyone excited. The band just gets better and better. It's hard to believe that a band can do that [laughs].

What I think people can expect is a ferocious evening of great music. Everywhere we go we have the same kind of reaction. First of all a lot of people can't believe their eyes and ears when they see and hear Eric and Julie, these two young kids who play way beyond their years and have a maturity about their playing in the tastefulness that they use. Then there's the old guy in the middle, that would be me. This trio has given me wings because now I'm the only guitarist. I set up a lot of loops as I play so that there’s something else to play to and it gives me the chance to fly off in any direction I want. So there's quite a lot of improvising; no two shows are the same at all.

RO: You brought up the fact that your cohorts are a little bit younger than you. Age just seems to fall away naturally for musicians working together, whereas in other lines of work it may be a hindrance. What is it about music in particular that makes the age factor not an issue?

AB: I think it's the spirit of it. Music is its own language. Music doesn't - as you say - have any limiting boundaries to it. You can be an eighty-year-old musician and still be playing or you can be an eight-year-old kid. I think what keeps the spirit that way is the sharing, the commonality the musicians have.

AB: Yes, that's exactly what I'm trying to say. There is a spiritual element too. I don't know how else you would explain it. It’s unexplainable. It's like something in the air that's shared, a type of energy and you can't see it; and when you feel it, it energizes you.

Don't miss Part Two of RockOm's interview with Adrian Belew coming in September. Register now at RockOm.net, in the top right hand corner of the homepage, to be notified when the conclusion of this interview is published as well as to stay in touch with all the interviews, news and stories exploring the connection between music and spirituality at RockOm.net.

The Adrian Belew Power Trio kicks off their tour August 21
Posted by RobinSlick at 11:04 AM