In Memory of Les Paul

ETA: If you are around at 2:00 p.m. eastern on Friday, August 14, a radio station out of England will be broadcasting the brand new studio album by the Adrian Belew Power Trio, also known as "e". Here's the link.

So in October, 2005, Eric Slick sat behind the drums and performed for Les Paul in honor of his 90th birthday. Les had a smile plastered to his face the entire time - he was really tickled because the band played a few of his most famous songs. Here's a photo from that day (Eric still had his shoulder length hair) and my accompanying blogpost, which includes the very first photograph of Julie Slick and Adrian Belew when Julie was "just a fan" and a poignant photo of Jack Bruce with Julie's significant other, Matt. Oh yeah, John Mayer was there, too. 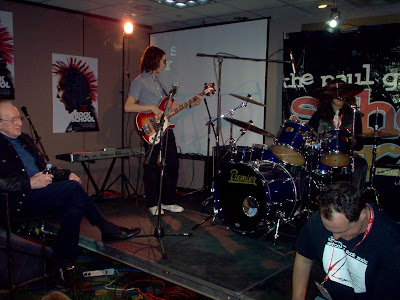 That night, Eric and Julie would meet Adrian Belew for the first time. Adrian was performing at the Roseland Ballroom that night in further celebration of Les' birthday, and Julie and Eric were performing with the School of Rock Hall of Famers (all-stars who had graduated the program). Eric and Julie would later play with Adrian in March of 2006 at the New York Knitting Factory as Hall of Famers again, and it was there that Adrian found his band, the trio that has now toured four continents in three years.

Tomorrow night, Eric takes the stage in Bad Doberan, East Germany at Zappanale, where he will perform with Project Object and Frank Zappa alumni Napoleon Murphy Brock, Ike Willis, Denny Walley, Robert (Bobby) Martin, and Don Preston. One of the songs he's going to be playing, with Robert Martin on vocals, is Whipping Post, and yeah, Duane Allman played a Les Paul. So in honor of that, and in memory of the late, great Lester William Polsfuss, a/k/a Les Paul, who flew away today, I give you the Allman Brothers, 1972, Live at the Filmore...Whipping Post:

I can't resist. Here's the Frank Zappa version, with Robert Martin on vocals. Have I mentioned what a lucky bastard my son is? Here's hoping someone posts a You Tube in a couple of days of that one.

It was a pleasure meeting Les Paul. He was brilliant, charming, and he mesmerized us when he spoke. I will never forget that day, ever. And he autographed the pickguard of our vintage Les Paul. Maybe tomorrow I'll post a photo.