So yeah, today is my birthday though as I just remarked on Twitter, I'm now officially at the age where I must begin either ignoring said birthday or start counting backwards. 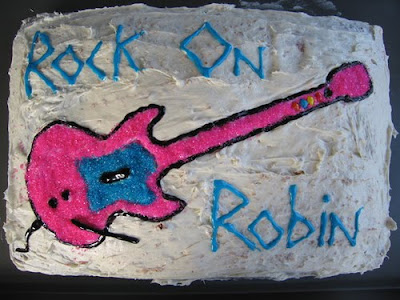 No, that is not my cake, I found that pic on Google images just now and thought it highly appropriate. But my cake, a rich butter pound confection that will be the last fattening thing I consume this month and next (and this time I mean it!), will be from here because they are truly the best pound cakes in Philadelphia.

And while Julie is in Nashville prepping for the upcoming Adrian Belew Power Trio tour, Eric will be arriving home tonight from Germany and he's coming straight here to have dinner with me and, yep, to sing Happy Birthday though he probably won't have cake, being vegan and all. I know, I know, I should have ordered a vegan cake but that will be for next year, I promise. The best part of the birthday song is that the dog always joins in. I'm totally serious. I will get Eric to record it on his iPhone and will post it later.

Now watch, this will be the one year the dog doesn't sing, but for whatever reason, that song drives him nuts and the minute you launch into it, he starts howling along. It is seriously one of my life's most simple and joyous pleasures.

So nothing much is happening right now, EXCEPT THAT I'M LEAVING FOR NASHVILLE ON THURSDAY AND I'M GOING ON TOUR FOR THREE WEEKS, TOO!!!!!

Ha ha, yeah, I know I've already shouted that from the rooftops a few times but I'm just a tiny bit excited. My plan is, at least in theory, to live blog from the entire tour. Now of course that will depend on a lot of stuff - whether the venue has Wifi, whether the hotels really do have internet (so many times they either charge way too much or tell you that you need an ethernet cable which they have at the front desk, only you go to the front desk and they are out of them. I am not going to go out and buy one myself in advance because I can never get them to work right, anyway). Also, it will also depend on how busy I am. I am hoping to be so busy selling merch and meeting and talking with fans I won't have time...but I figure if I have Blogger set up and just point my mac with iPhoto in "your" direction, I'll be able to post photos and at least short blurbs daily. In any event, trust me, I will find time to at least do regular blogging if I can't manage the live stuff and I'll still take plenty of pics to post in my down time.

So what I'm trying to say here is: If you come to the shows, don't be shy, come up and say hello, and special preference for your photo to be posted on my blog is to WEAR YOUR E-SHIRTS! Cool? Cool!

I also learned that ABPT tour out west for October is a GO GO GO, so people on the left coast, start saving your money!

Anyway, I think that's it for me today - I am taking the day off to hang with the dog, do some writing, and take care of some last minute stuff before I leave on Thursday. But of course if there is any breaking news, I'll be back.

Behave yourselves today, and if you want to buy me a present, instead of doing that, why not buy yourself a good book instead? Ha ha - I know a great author and here's her page at Amazon.

Later,
xo
Posted by RobinSlick at 8:54 AM