Chasing the Clouds Away

So here's an interesting/fun journal entry from Gary Platt regarding "e": 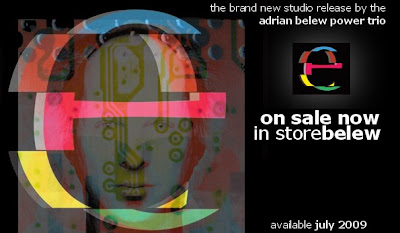 Yeah, I know I was shy about writing there for awhile, sorry about that.

Enough about me talking about me, how about you talking about me? OK, well, Gary just finished a wonderful new instrumental record from one of the great guitarists/orchestrationist (!?) of our “time”; Adrian Belew. His Power Trio recorded mostly live in Adrian’s studio at his Ponderosa there near Nashville. I had the privilige of mixing the tracks in the evenings in my own studio prior to Adrian’s visit with me here in San Francisco. His visit with me was pure joy, we just had tons of laughs together, we’ve always had that for some reason. We put the final touches on it, then I mastered it up and now it is on the market (Aug 3rd). the album is entitled “e” and features Julie and Eric Slick, a brother/sister team that would make Karen Carpenter sit up in her grave. Ok, that was crass. But anyway, Julie is a total monster bassist and Eric is waay beyond drumming - he’s superb. These two provide the most amazing “wall of sound” (Wallace Hound??) behind Adrian’s many guitar personalities. When you think Adrian is playing a piano, he’s really playing guitar. Weird shit like that. And the grooves on this record are killah, I mean there are some really hard-drivin’-never-in-4/4-where-the-hell-is-”one” grooves and a half. Anyway, my audio life is complete, at last..."

Well, that's good to know, Gary. My audio life is complete at last, too.

Hey, and a huge thanks to Kill Ugly Radio and The Idiot Bastard for their "e" shout outs as well!

And guess what? I get to hear that wall of sound live, up close and personal, for three weeks! That's right, I'm going on the entire tour with the band, will be at every show...look for me at the merch table at most of these venues:

Aug 27, 2009 "e" listening party @ Rembrandt's
(powertrio will be mingling with
crowd as "e" CD is played).
This is not a concert. Philadelphia, PA

I'm excited. Especially about Montreal and Toronto, where I've never been, and Quebec City, where I'd like to spend eternity.

One final reminder to catch Eric Slick on drums tonight at Silk City with Glenn Alexander and Dave LaRue - they go on around 11:00 p.m. but get there early for the opening act, Base3 with Tim Motzer...in fact, when I was just collecting those links, I was reminded that tonight is the CD release party for Base3 and that Tim is written up in this month's issue of Guitar Player Magazine (click on that link for a cool video). So basically this is going to be a pretty amazing show at an intimate, funky club with great food and drinks...one of my favorite spots in Philadelphia...I just hope I can stay up that late.

Unbelievable story that Eric just told me: We first met Adrian at Les Paul's 90th birthday celebration at Roseland Ballroom in New York in 2005...Eric and Julie played with the School of Rock Hall of Famers (Rock School All-Stars who are graduates...I am not sure if this group still exists or not because Eric and Julie are always on tour with other projects). And who was Adrian's guitarist for that event? None other than Glenn Alexander. How freaking spooky?

In other news, through the magic of Google, I just learned my son is in yet another band, tentatively named "Young Ice". *Snort* and Eric made fun of Seaslick. Well I never! Ha ha, just kidding, very cool name; I'm loving that Eric seems to be everywhere these days in an alleged depressed musical environment. Bah on that and I can assure you, it is alleged...there is just amazing new music out there, like the band Julie Slick produces, Cheers Elephant, who are in the studio recording a brand new release with Ms. Julie as we speak. Anyway, Young Ice features guitarist Nick Bockrath, who is also in Zoe Kravitz' band, Elevator Fight, and Zoe is of course the daughter of Lenny Kravitz and Lisa Bonet. Zoe was at Eric's birthday party and sat next to him while he jammed on the drums. Unattractive, isn't she? 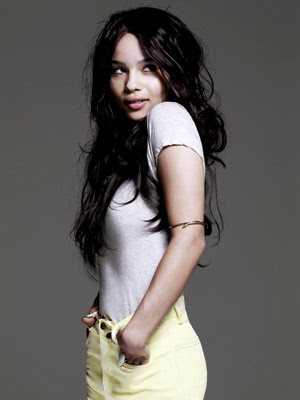 God, life is so unfair.

Anyway, I think that's a wrap for me. I am determined to work on my novel today though rumor has it that Julie is swinging by later on to help me "organize my entertainment center". I didn't even know I had an entertainment center but whatever, Julie is talking techie terms to me and it's not that I tune her out when she does that, it's just that I have no idea what she means so I simply let her do what she wants and I'm usually happy with the results.

Except for last summer when I was at the beach house for two weeks and returned home exhausted to find my entire kitchen re-arranged...but that's a whole 'nother story. Ha ha, but hey, ever since they first put her on my belly fresh out of the womb, she has been the CEO/Social Director of this family and apparently the interior decorator as well so nothing should surprise me at this point.

Oh well. It could be worse. God I love my family.

Later,
xo
Posted by RobinSlick at 8:25 AM