Moving on with Zappa, King Crimson on resume

Over the years, progressive-rock guitarist Adrian Belew has unleashed more than his share of bristling, complex, incendiary guitar bursts. And he's always been in bands that gave him plenty of room to pursue his ambitious and restless guitar muse. 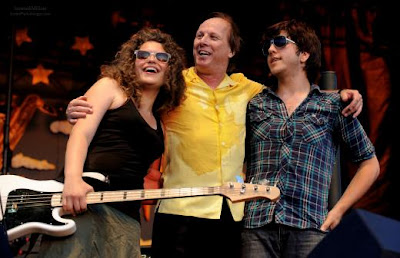 Early on, in 1977, he played with Frank Zappa, getting "schooled" in Zappa's precision-plus brand of progressive-jazz-rock fusion - and spraying his now-signature guitar sound all over Zappa discs like "Baby Snakes" and "Sheik Yerbooti."

He did stints with David Bowie and as an unofficial member of the Talking Heads, and also recorded with Laurie Anderson. But since 1981, he's been most well-known for the mind-bending art-noise he's created with King Crimson.

But in recent years, Crimson has not been a full-time endeavor - they only tour or record when the mercurial Fripp feels like it, which, lately, has been "not very often." So, in 2006, Belew put a new band together, the fittingly named Adrian Belew Power Trio, which comes to The Ark on Monday.

Joining Belew in the Power Trio are the young monster rhythm section of brother and sister Eric and Julie Slick on drums and bass, respectively. For the band's live shows, Belew wanted to perform not only new material, but also selections from some of his acclaimed solo albums - as well as knotty classics from the Crimson songbook, which can be maddeningly tricky.

"They're very special people and players - they amaze me all the time," Belew told AllAboutJazz.com. "They've got to be the best young players in the States right now, in my opinion. I just don't know where you could get a better bass player-drummer duo - they're just really gifted people. They've absorbed so much music, more than a lot of grown, mature musicians that I know."

Belew has been prolific lately. In 2005 and 2006, he released three experimental solo albums, with the minimalistic titles "Side One" through "Side Three." He followed in 2007 with the also-functionally monikered "Side Four Live." His new disc, titled, simply, "e," was scheduled for mid-July release.

In August 2008, Belew embarked on a Crimson mini-tour.