***ETA: Immediately after posting this, I've already found a new review, added at the bottom***

From the Ween Forum Board entitled "Post a Reviewof the Last Show You Saw"...

The guy is not human. Played a full 2 hour set (complete with Elephant Talk) and smiled just about the whole time.

Eric and Julie Slick were great as well." 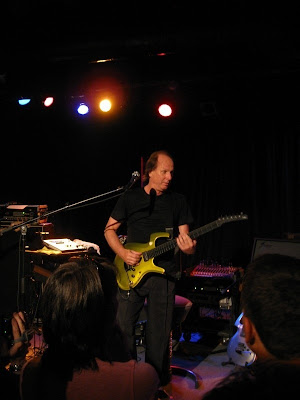 "Saw the Adrian Belew Power Trio again last night and Julie Slick is just a great player. The band really has a lot of synergy and has a lot in common with the last 70's lineup of King Crimson."

He he - and this one, which is a thread on best women bassists:

"I love the pathetic whining envy these threads continue to bring. But hey, share the love, you guys with withered, uh, sensibilities. Get generous! There's that Julie Slick who's playing with Adrian Belew too, you know."

"So, I went to the show. Skipped out of work early and hauled ass downtown.

Where to begin... Belew is beyond words. Honest to god, the looping he did during most of the songs was just scrambling my brain as I tried to process it all. He had so many things going and sometimes it would take a little while for the picture to come into focus, but once every track was laid down and they were perfectly in sync with the drums and bass-- it was breathtaking.

Highlight for me was Elephant Talk. Adrian said it was the first time they'd played it in 18 months. He also played 3 songs off his new album that is titled "e". They played "a" "b" and "e" (they skipped c and d). All I can say about the new stuff is that I dont know how he pulled it off live. The guy is a wizard with all his gear.

Part of me was absolutey inspired by what I saw, but I think a bigger part of me was telling me to sell all my gear because I'll never be able to do what this guy can do."

*****
"The things he does with his guitar and effects completely boggled my mind. The fact that he could opperate everything so seamlessly and have it sound so good with aparently very little effort... I just can't imagine having that ability. And the best part was that he was smiling and laughing like a fool the entire night, through every song.

I've seen Jeff Beck in person and been floored by his complete control of the instrument. Belew is like that, with the addition of what seems to be an obession with looping and out of the ordinary guitar tones and effects."
********

Hi, I was at the ABT show Saturday too. What a collection of monster players. Julie grooved and kicked major booty. Eric slammed and was thunderous on the freaking FOUR PIECE! (shaking head). Adrian, well he’s okay..."

So that's all I've got for now but it's still early in Chicago and hey, you know me, if I find more, I'll be back.

Eric is flying home today so that he can play at the XPONential Festival this Saturday with Tom Hamilton and The American Babies...then he swears, but I do not believe him...that he's taking a vacation for a week before leaving for Europe with Project Object on August 6 where he'll be performing in Prague, Netherlands, Germany...and get this...a 3,000 seat soccer stadium in Spain.

But who wants to bet me some money that Eric will probably be playing gigs while he's back home...I know him...he'll never be able to go more than two days without playing somewhere. Hell, I will bet the house on it.

And as for Julie, she is headed back to Nashville with Adrian today where she will spend a week on maybe a couple of surprises? Who knows. But you know me, when I find out, so will you.

But one this I do know...the trio's first studio CD, e, will be available on July 25. That's in two days! Hurrah!

ETA: Well, this one is interesting - can't say I agree with all of it but there's a lot to like, too:

Adrian Belew will turn 60 this year. Why should you care about an old guy with such a ridiculous name? Probably because he is one of the most technically capable and imaginative guitar players, far more adept at what he does than any number of people half his age. And able to keep up with people a third his age. Let's put it another way: Adrian Belew is who the guy playing that self-indulgent solo at Guitar Center thinks he is.

Hit up Wikipedia for Belew's bona fides: King Crimson, Talking Heads, Bowie, Zappa. For someone with his capability, it might be surprising that the Adrian Belew Power Trio performs at venues like The Ark, a hall that's smaller by half than a high school gymnasium. But the reality of it is that those with a particular talent -- and make no mistake, his is a particular talent -- tend to find themselves reaching an audience the size of which has an inverse relationship to what they can do.

Speaking of high school gym, a word is in order about the other members of the Trio. Julie Slick (bass) and brother Eric (drums) are barely twenty-somethings, making the balding dude on stage between them seem even more the creepy uncle to their cherubic youth. One wonders whether Belew is employing them as interns. That they're even willing to hang out with the likes of him is somewhat surprising because the talent level of the young duo seems unbounded.

Belew is obsessive about working what he can manage to get out from his Parker Signature guitar, to the extent that there are at least two possible reasons why he is playing with the Slicks: His contemporaries might be less willing to cut him so much slack as he is nudging it; his contemporaries might have a profoundly difficult time of keeping up with him. There is something to be said about working with these talented young musicians, musicians he met at the Paul Green School of Rock in 2006. There is something to be said about, well, education.

But before we allow this review to be hijacked by the Slicks -- as they threatened to do throughout the show -- let’s turn the focus back where it rightfully belongs, to the mad professor. His experiments with the guitar are legendary, and such dabblings in effects and processing to make his instrument sound like all manner of animals and mechanical beasts were on full display. Particularly interesting was a lengthy solo piece in which Belew chased the kids off the stage, then sat down to jam with himself, literally, on a cover of George Harrison’s “Within You Without You.” Belew also debuted some material from his forthcoming album, e, which will be available on his Web site on July 25, or so we were told.

What's interesting about Belew's music is that in some ways it is like a fabric, a tapestry, one that he's been weaving for several years, but in a way that it is all of a piece. That is, he opened the performance with "Big Electric Cat" from his debut solo album of 1982 and closed it, in the encore (of course) with King Crimson's "Three of a Perfect Pair" from 1984's eponymous album, yet even though there was the new material from e, someone would be hard pressed to delineate the musical differences between now and then, or even between then ('82) and nearly then ('84). You can't see (or hear) the gaps or changes in the stitching. The experimentation never seems to have started, nor has it stopped.

Yet for all the weirdness, noise, and creativity that distinguishes Belew’s sound, perhaps the best aspect of his current touring arrangement is that it delivers a tight and polished rock performance, with much more than the meandering guitar wankery that has always been prog rock’s Achilles heel. This was much appreciated by the crowd, which broke into a veritable sing-along during the encore. Though let's be straight -- as much as "Three..." represents the high-water mark for King Crimson's accessibility, this was a far cry from what presumably went down at the nearby DTE Energy Music Theater, where Asia and Yes were playing on the same night.

Even before the encore, the Power Trio had received a standing ovation, albeit one that was premature and seemed to genuinely surprise Belew, who noted that the show wasn't over, as though it wasn't something that often happened. And before the band finally exited the stage, he said that while they've traveled quite extensively, they'd not been to Ann Arbor (although years earlier, in his post-pre Crimson life [i.e., left the band, reunited with the band, all part of the fabric], he'd performed at a nearby ballroom with The Bears), he thought, given the reception, they'd "found a home there." Which is undoubtedly true, not because of the generosity of the crowd, but because Adrian, Julie and Eric paid the rent in advance."

Oh, and if you haven't picked up the Trio's Live Overseas Rare MP3, maybe this Amazon review will twist your arm:

"This version of Adrian Belew Power trio has reenergized Adrian's playing. If you are a fan of Adrian Belew, the freedom that has emerged in Adrian's playing is a direct result of the Slick siblings. Julie and Eric Slick are a brother and sister team. They have been playing together since they were little kids and it is if they are connected. Eric Slick on drums has a unique sound of his own-sort of a combination of Stewart Copeland meets Keith Moon, or Terri Bozzio meets Carl Palmer with a bang. Julie plays barefoot, beautiful/humble, and there is a reason she has shared a stage with Tony Levin. This young woman can play with the best of them whether it were filling in for Chris Squire or any of the other prog greats like Greg Lake if given the chance. She has it all. But the two of them coupled with Adrian Belew, and songs Adrian did 20 years ago sound as if they were written yesterday. Pick this up or side 4 and you will just be waiting for the release of e."