Pardon Me Boy, is that the Chattanooga Choo Choo? Adrian Belew Power Trio in Real Time

Thanks to Andre Cholmondeley for sending me a real time photo of the Adrian Belew Power Trio doing sound check for tonight's performance at the Riverbend Festival in Chattanooga, TN: 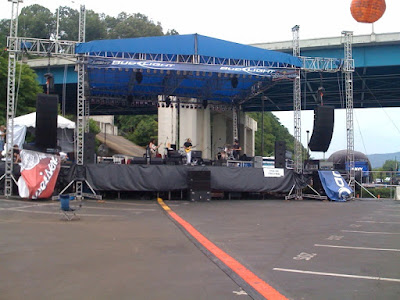 And the east coast leg of the tour is slowly taking shape...I can tell you for certain that the band is playing at the Sellersville Theater on August 26 and with seating for approximately 350, the tickets will go fast...you can buy them right here and it's pretty amazing how they are advertising the band...here's a screen shot: 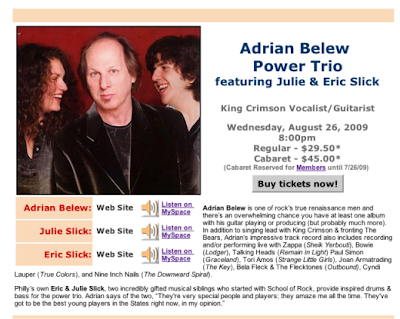 Yep, I'm thrilled about that and as I've also mentioned here, next Saturday Julie and Eric will be joining the California Guitar Trio on stage at the Sellersville Theater and I will relink that tomorrow with another screen shot because yep, I finally taught myself how to do those correctly.

The trio is also booked to play BB Kings in New York City on August 28 and you can purchase those tickets right here though I just noticed they are not on sale until Friday so I will relink that as well. I believe there will also be dates in Anapolis and Virginia...stay tuned.

And if you click on the Andre link above, you'll see lots of Project Object shows coming up, including one at World Cafe Live in Philly on July 3 and several featuring some INSANELY FANTASTIC Zappa alumni...more on that in future posts as I want to devote a separate entry to talk about that.

"...Toyah, Chris Wong and Bill Rieflin meet in Seattle to write and record THE HUMANS second album with ROBERT FRIPP as a new member for this particular album. TOYAH says…."I always know I have a good idea………..when Robert wants to join the band!”

Additionally, THE HUMANS tour dates for the UK and Europe 2010 will be announced on this site later in the year. More news soon…"

Here's a great You Tube of The Humans with a Robert Fripp cameo:

Continuing with the theme, King Crimson bassist Tony Levin has a whole slew of new tour dates on his blog (click link) but what really interested me are his blog archives...man, he really was the first person I know to keep a blog...these entries date back over ten years ago and are super, super interesting. You can find them right here and I have to admit, I read them all...was totally sucked in and cannot believe he was on line and keeping a journal before I knew anyone who even owned a computer.

And in other news...

Oh, that's right. I already told you. Wait until you see the graphic for that and what is planned. Should have that for you in the very near, near future.

And we're planning a big "e" surprise party! It's such a surprise the only ones who know about it are...I can't tell. Let's just say even the band doesn't know.

Okay, they do now. Eric, don't even bother calling me, I'm not telling.

Julie, did you join Twitter? I heard a rumor to that effect but you have not added me as a friend. For shame! I bet I can find you...let's see...hang on...yep...Julie Slick on Twitter...ha ha, I'm going to friend you, you better friend me back!

Getting back to Adrian, one of the things Julie has been doing down in Nashville is working with Ade in the studio and it looks like she's going to be flying down there a lot in the future to act as co-producer with him on various projects..hurrah! I mean, she has a $100,000 college education with that as her major...yep, even managed to graduate Magna Cum Laude while on tour...so how totally cool that she gets to use her degree! And to work alongside her bandmate and great friend...not to mention a brilliant producer in his own right. What a win/win situation for them both.

You may also be wondering what Julie has been cooking for Ade and his family while in Nashville. I know I was. So I dropped her an email and here's what she had to say but this is obviously the abbreviated version and I'm sure she'll have photos and recipes up on her own blog soon:

I am so hungry reading that...

Okay, I think that's it for today but you know the drill, if anything else pops up, I'll be back.