Okay, listen up - tonight there's going to be an awesome show at the North Star Bar in Philadelphia: 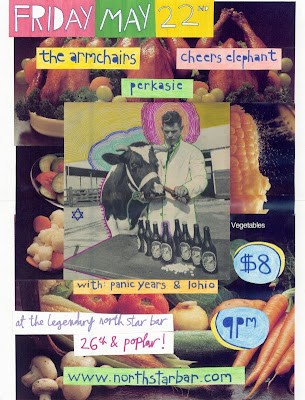 Yes, Julie's boyfriend, Matt, is the bassist for Cheers Elephant and yes, she produced both their first and upcoming new CD, but tonight, Eric Slick will be sitting in on drums with the band and that's going to be a blast. "It's a family affair..." Who sung that again? Oh well, who cares. Not me. I'm in full holiday mode today and ready to have some serious fun this weekend. Wait. It was Sly and the Family Stone, wasn't it? I loved him but how fucking demented did he get in his old age. Whoa. Pretty fucking demented. I had to hit Google, because for a minute, I wondered if he died last year but found this instead:

On Sunday, January 14, 2007 Sly made a short guest appearance at a show of The New Family Stone band he supports at the House of Blues.

On April 1, 2007, Stone appeared with the Family Stone at the Flamingo Las Vegas Showroom, after George Wallace's standup act.[2]

On July 7, 2007 Stone made a short appearance with the Family Stone at the San Jose, CA Summerfest. He sang "Sing a Simple Song" and "If You Want Me to Stay," and walked off stage before the end of "Higher." He wore a baseball cap, dark glasses, a white hooded sweatshirt, baggy pants and gold chains. Stone, who took the stage at about 8:45 p.m., cut the set short, in part, because the promoter was told that the show had to end by 9:00. The band began their set over 90 minutes late reportedly because the stage management was poor and the promoter's band played for 30 minutes longer than scheduled. Sly's 15-minute set came only after his sister, Vet, and the rest of the band performed for 35 minutes. As he exited the stage he told the audience near the front of the stage that he would return. He did return, but only to tell the crowd that the police were shutting down the show. While many blamed Stone for this incident, others believed that the promoter was at fault.

The same scenes were repeated at the Montreux Jazz Festival on the 13th July 2007 with over half the sold-out venue walking out in disgust even earlier than his stage exit.

The same happened again one day later at the Blue Note Records Festival in Ghent, Belgium. Here he left the stage after saying to the audience that "when waking up this morning he realized he was old, and so he needed to take a break now". He did the same again one day later, performing at the North Sea Jazz Festival.

But as the tour progressed, Sly seemed to be more confident and animated, often dancing and engaging the audience. By the time the tour rolled into Paris, things appeared to be improving, and Sly sporting an afro and a headband, performed an energetic and absorbing show, with one his finest performances of "Family Affair." At the Bournemouth gig, Sly performed a feat many of his detractors would not have believed possible. During the performance of "I Want To Take You Higher," he prowled the edge of the stage, and jumped off into the photographers pit, provoking roars of approval. He performed soulful versions of Stand, "I Want To Take You Higher", "Sing A Simple Song", "If You Want Me To Stay", and "Thank You (Falettinme Be Mice Elf Agin)", (which at one point morphed into "Thank you For Talkin' To Me Africa", a track rarely performed in public). But the show was marred by sound problems and the vocals were barely audible through much of the show.

On January 4, 2009, Stone appeared briefly at the George Clinton & Parliament Funkadelic concert at the House of Blues, Las Vegas. He appeared dressed in what appeared to be a children's spiderman costume. Once he took off his mask, he had a large gray mohawk and a smile on his face. He sang a few songs and hit a few notes on the keyboard and then disappeared. Some people in the audience were chanting "Bootsy!" because some people thought that's who he was...but George Clinton introduced him as Sly Stone and everyone immediately knew that it wasn't Bootsy."

Okay, enough of that. And I said I didn't care.

Getting back to me...

Last night was pretty wild, too. I went to a 68th birthday party bash for Bob Dylan and a bunch of local musicians played his covers to honor him. I drank Ketel One and club soda for most of the night so it all sounded good to me and regrettably, I do not remember much after the first hour or two.

Speaking of birthdays, Eric's was INSANE. Even if you are not a vegan, you really need to eat at Horizons. One of the best meals I've ever had in the U.S.

In other news, we now have some idea of what the next few months will be like: Julie heads to Nashville from June 1 to June 11 to work at Studio Belew; Slick Daddy will be flying down for a visit June 5-7; the new studio Adrian Belew Power Trio CD "e" is in very secret hands on the west coast where it will be joined by Adrian himself for four days next week....Eric has a bunch of gigs as usual as the Riverbend Festival approaches on June 10, but he'll be down in Nashville on June 9, play the show, then head for Bonnaroo where he'll be performing every night...details to follow...both Julie and Eric are doing a special gig with a very special band and I'm not sure if I can announce that yet or not; Eric is playing NEARfest on June 20, then the Adrian Belew Power Trio will set off on tour from July 17-August 1 and from August 20-September 2...so far...as soon as I have the details, so will you.

And as for me, yes, me again, it is my blog, I am enjoying a much needed break from the world and have returned to full-time writing in a big way...working on two books simultaneously and will be taking it a minute at a time...

So be well and have a great holiday weekend. If I get any cool news, I'll be back.

Later,
xo
Posted by RobinSlick at 9:32 AM