So today I take off for five days in sunny (well, in theory) Orlando, Florida, to participate, i.e., sell/sign my books and hit the many open bars, at the RT Convention. But before I go, a couple of tidbits remain from last week's Adrian Belew Power Trio tour. 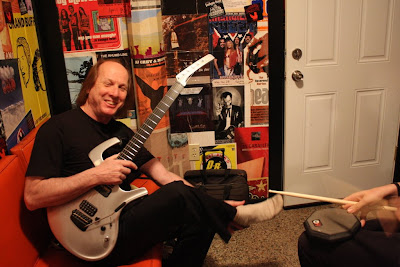 Here's a fantastic interview recorded just after the show in Illinois -- amazing! (Highlight: Adrian says: "If I could be the drummer of my dreams, it would be Eric") 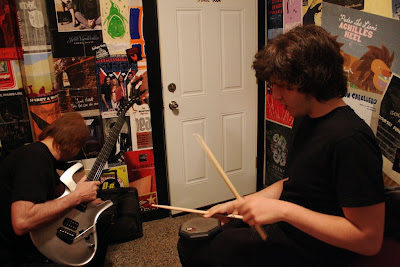 If I e-mailed you Adrian Belew’s musical resume, your hard drive would crash. It’s no wonder Zappa, Bowie, Talking Heads, King Crimson and more wanted to play with him. He’s a brilliant musician, and has such a joyful personality. I’ve seen King Crimson many times over the years, and never saw Robert Fripp smile unless he was playing with Adrian. So when the Adrian Belew power trio took the stage, I thought maybe he was playing with his kids. Well, they were someone else’s kids, but they did turn out to be brother and sister. Julie and Eric Slick were young enough to be on Spring Break, but could they play. Any rhythm section would be challenged to play with someone as brilliant as Belew, but they did better than hold their own.
They were great!

The trio opened with twenty minutes of instrumental work that will be on a new album to be released in June. Adrien has all kinds of technical tricks, but it only enhances his talent. And thankfully he did some vocals. I think he’s a charming and underrated vocalist. And he continues to be one of the most brilliant guitarists this music fan has ever seen. If progressive rock had followed Belew’s lead, the film Spinal Tap would never have been made. While prog rock went off the deep end with musical and lifestyle excesses, Adrian keeps it real.

A note on the venue. Adrian clearly loved the room and sound at the Old Town School. I’m not a mindreader. He said so. I’m just sorry I wasn’t there the night before to see Loretta Lynn’s big pink tour bus. That was a photo op, I bet."

So that's very cool and definitely made my morning...but for now I must pack for an early flight. I will have my laptop and camera with me so my plan is to blog from the convention...erm...you really can't quite believe what goes on there but this time I'll have the photos to prove it.

Later,
xo
Posted by RobinSlick at 5:54 AM