Oh man, I just read this review of the Adrian Belew Power Trio at the Coach House in San Juan, Capistrano last night written by "Dwight" and I had to come in and do another blog post: 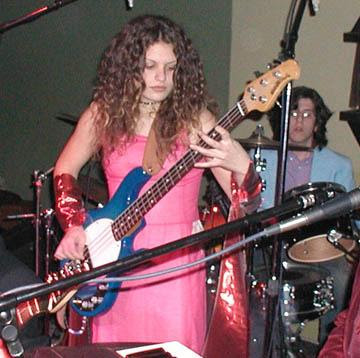 "This was my 3rd Trio performance that I attended. It was the best to date.

None of my ABPT virgin's that I brought have been able to sleep yet. The are still sitting in their living rooms with their hair blowing back like that old Maxell tape ad. Remember that? They went from skeptical (thinking it was going to be droning sounds capes...not that this would be a bad thing for me) to a ho-hum attitude about two average players on bass and drums. I kind of kept quiet and let it all speak for itself.

My friend Tanya was up front who was an original promoter for Zep, Joplin and Hendrix. She had seen Adrian but never seen the trio. I told them all to buckle their seat belts prior to the show because by the end of the evening you will have a favorite guitarist and he will be the best that you have EVER seen. Eric will be in your number 1, 2 or 3 spot on drums. Julie will be right up there with any of your favorite bass players. Well, after the show, I literally had to almost carry these folks out. Not only is Adrian their tops now. But Eric is at number one (he is their favorite of all time now).

To quote Tanya who is 74 years old and attends over 200 shows per year and
knows most of the top rock musicians in the world (she absolutely adored
Julie...who didn't?):

Those kids are something else.

Adrian was in rare form all night. I still can not go to sleep. I am still
thinking about that show.

Dwight you are right that kid on the drums is going to be big big.

It was so nice seeing you and your friends last night.

Your son is just a cutie Pie. So handsome.

I received emails from some of them who have dug up the petition for Ade's induction into the Hall Of Fame and are an the campaign trail now. He definitely deserves it. I know you folks know where it is. But I will be copying this review to many others:

Petition to Induct Adrian Belew into R&R Hall of Fame

Last night was a home run folks. A huuuuuuuggge HOME RUN. They knocked it out of the park. The energy was high and Adrian extended many songs due to his unrelenting energy. It is extremely fun watching Julie and Eric grow and mature into AMAZING musicians.

I see a lot of shows. This was my tops in a
lllllllllllllllllll lllllllllloooooo oooooooooooooooo ooooonnnnng time. My 9 year old was with me on a school night. Total child abuse and neglect. However, it was his favorite show at the Coach House. He has been to about 50 shows so far too. Thank goodness for Hearos!

To quote another friend of mine's Son last night after the performance who is aspiring to be a really good himself. "I THINK I JUST SAW GOD."

Per Ade's request, he might just see me at the Belly Up Tavern on Tuesday night.
*******
Okay, this may be my record breaking blog post day. We shall see.