So as I have been shouting all over the internet, the Adrian Belew Power Trio begin a month long tour starting one week from today, but according to the February, 2008 issue of Guitar Player Magazine, if you are going to the San Francisco show at Slim's on February 23, you have a chance to win something pretty spectacular! 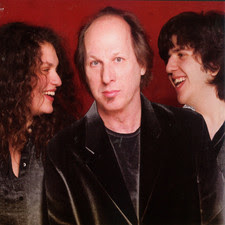 Guitar Player is proud to work with Another Planet Entertainment and Parker guitars to present a one of the instrument’s most innovative players.

Adrian Belew became one of the most accomplished guitarists in Earth’s history by making otherworldly sounds with Frank Zappa, Talking Heads, David Bowie, and through his continuing work as the frontman for King Crimson. In GP’s 25 Anniversary Issue, Belew was counted among “25 Players Who Shook the World.”

Since 2005, Belew has released three solo studio recordings—Side One, Side Two, and Side Three [all on Sanctuary]. Belew described them in the May 2005 issue:

“There are three different brands of music I’ve discovered over the past few years,” he said. “The first was looping, which became the power-trio material featured on Side One. I would typify the Side Two style as DJ music, because it includes a lot of drum machines, loops, synthesizer pads, and a vocal that appears and repeats, but lacks verses and choruses. Side Three is more like most of my solo records—an eclectic mixture of different styles.”

Now he’s supporting a live solo effort, Side Four [Independent], which captures him recreating the solo material—plus a few Crimson gems—with bassist Julie Slick and drummer Eric Slick. “This is the best band I’ve ever had,” promises Belew.***

Belew will play his Signature Parker Fly Deluxe, a cutting edge instrument with a Sustainiac pickup, an RMC piezo hex pickup, MIDI capability, and Line 6 Variax modeling technology. Parker is providing a solid mahogany P-44 guitar to be autographed by Belew and given away to one lucky attendee, so be sure to come and sign the Guitar Player Presents mailing list for automatic entry in the free raffle.

Contest Details
For a chance to win a pair of tickets to the show, click HERE and put Belew in the subject of your email. Winner must provide own transportation to Slims in San Francisco and have his or her own accommodations in the Bay Area on February 23.
********
So how cool is that?

Okay, back to bed for me - my flu is now a full-fledged, horrible head cold and while I feel better because I no longer have a fever, there are few things that are as uncomfortable as not being able to breathe or taste. Bah! It's like twenty below zero outside today but I may want to go out for a walk just to clear my head.

Later,
xo
***you know, when you look at some of the bands with whom Adrian has played, the fact that he says Julie and Eric are the best band he's ever had...oh God...for once I am rendered speechless.
Posted by RobinSlick at 7:04 AM