Photographer Mark Colman has posted the most amazing photographs of the Adrian Belew Power Trio's show Wednesday night in Portland, Oregon, and I'll give you the link for the whole set below but first, here's a few which really blew me away and I have to also include some of his descriptions:

"The Muse and I took time to watch the Lunar Eclipse on the way to the venue. It surely meant that something wild was going to occur. When we arrived, we found a choice spot right in front of the venue. Of course, we went around back and as luck had it, we were able to get backstage! There, to our amazement, we saw a real Rock Star getting a massage! That's what they do before gigs, you know. We weren't sure who it was, but we snapped this picture before we were thrown out by a large burley man named Elmer who smelt of dank diapers." 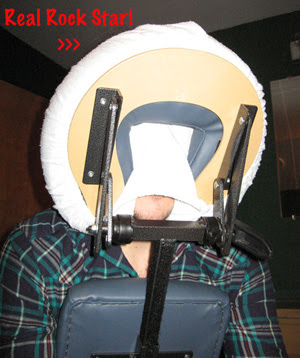 Hmm...who could possibly be getting that massage. Let me guess: 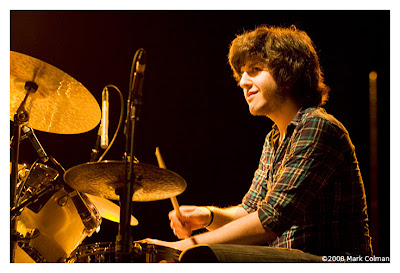 And here are some shots of Adrian, Julie, more of Eric...they just look like they are having the most awesome time on stage, don't they? 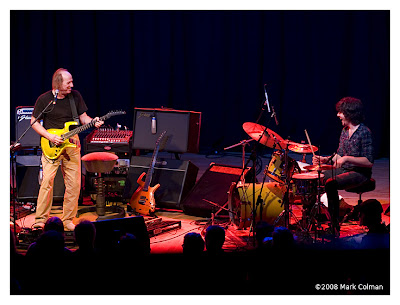 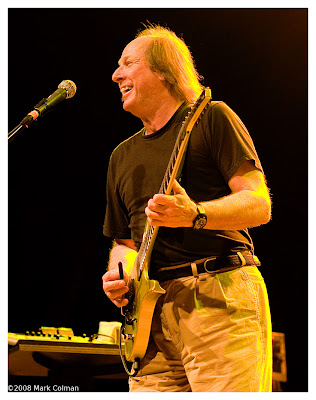 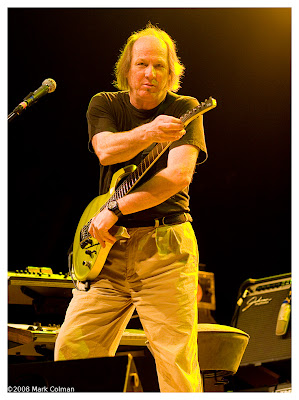 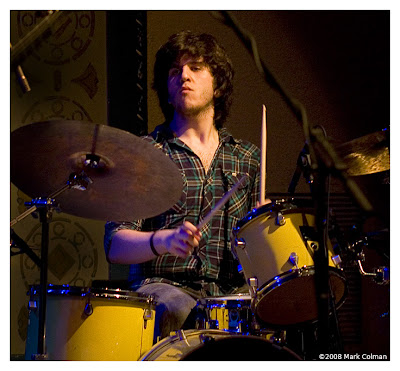 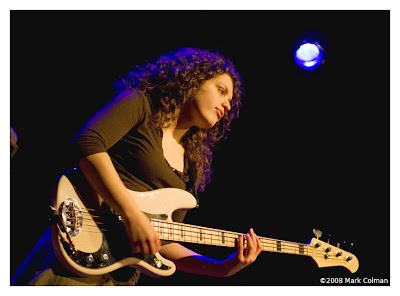 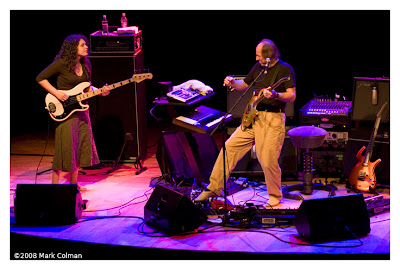 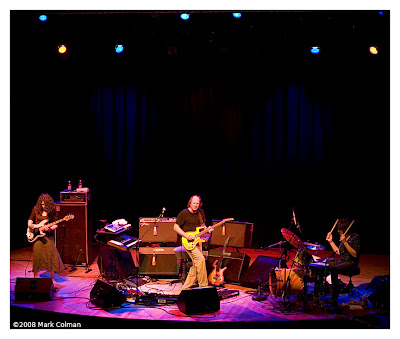 Here's what else Mark had to say about the show:

"What a gig! The trio are better than ever! They had to start this tour with no rehearsals! As this show was the second night, it is amazing that they were so smooth and fluid. It was a real treat, in a great venue, with a great audience. By the shows end everyone was on their feet and dancing.

I was thrilled that the lighting was the best that I've ever shot the band in. Give me light and I can do my job properly.

They were selling spiffy tee-shirts with that freaky image by that weird photographer, Kram Namloc. The posters (with the same image) looked amazing too. It was a kick to watch people buy them.

I'd like to thank Ade, Martha, Jules and Eric for being so kind to us. We felt like we were part of the family. Thank you.

If you get a chance to see them, don't miss it as they really are getting better all the time and that's saying a lot.

And to see the rest of the photos, go here.

And earlier today, I got the most amazing email from a graphic designer named Dan DeGraw who was at the Portland show:

"You should be the most proud mother on the planet! A friend of mine bought tickets and asked if I'd be interested in going. I had heard of Adrian Belew/King Crimson, but wasn't too familiar with his work, really. I more or less just wanted an night out. Being a father of two young girls(10 & 5), I don't get out much. I had ZERO expectations. My GOD! Eric is one of the most amazing drummers I've ever seen. I've played since 4th grade, but haven't owned a set in 18 years, so I can really appreciate the skill and hard work and talent from beyond that he has. And Julie...simply incredible. An inspiration to me and my 10 year old. She's just taken up cello this year and I've been trying to get her to try out the electric bass I bought last year. When I woke her up this morning, Julie is all I talked about. I said "you know the movie School of Rock?" She took lessons there and is now a rockstar, playing that instrument (pointing to the bass on her wall)! She wants to start writing her own music and wants to be like Julie now. Rock camp for girls, here comes my daughter! Eric has inspired me to buy another drum kit and get after it again. The energy he possesses...he was practically glowing and feeding it into the crowd. Such an amazing show and such amazing musicians you've raised. After the show my friend and I were reeling in amazement and we both noted the same thing. While Adrian is almost always looking at Eric for cues...Eric is looking past him at Julie. It really seems like she is the one in charge, even though it's Adrian's band. She's like the female Fonzi. 1000 times cooler than Leather Tuscadero.

Anyway...I'm far from speechless after last night. I want to tell everyone I know to check out this amazing new trio.

Okay, that's it for now.