Project Object on Tour: Tonight in Cincinnati! (and Kozmic Dreams) 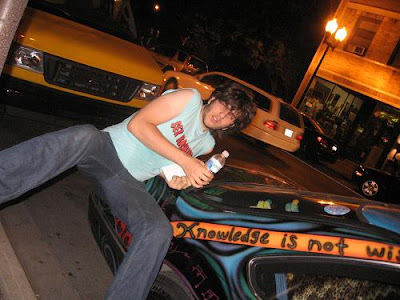 Picture of Eric Slick taken (in Michigan on October 18 either prior or subsequent to his show there) by one of the world's coolest photographers and oh god, she also has the most incredible MySpace site called Kozmic Dreams

Yo, Kozmic - if you are reading this, please send me the full size photo of Eric I posted above - I absolutely love it.

So tonight is the last night of Project Object's tour in Cincinnati (I finally learned how to spell that city) at the Poison Room. I'm sad it's over but I miss my son! (Though of course he's only home for four days before he takes off on tour again...what a life...do you think he'll swap with me?)

From the Zappa forum board:

"project object last night in Milwaukee was awesome. its unreal to have napi do his thing less than ten feet in front of you. the selections from one size fits all and roxy were like taking a trip back through time.

project object is great to see. they really keep the spirit of frank alive. i always have more fun at their shows than the zappa plays zappa shows (not that the zappa plays zappa shows are bad, i love them). project object have a fun and zaniness similar to frank's shows that zpz lacks a bit. the zft should stop shunning these guys and start working with them in keeping frank's music regularly performed EVERYWHERE. im sure there is one point that the fans, project object, and the zft would agree on: we want to hear more of frank's music l-i-v-e. with frank went the official source, so the slandering of those who are doing their part to keep frank's legacy alive is just wrong, on many, many levels."

I know Eric had some pals at the show in Madison last night, one of which is his good friend Biff Blumfumgangne, who had plans to join the band on stage with his violin for what...King King? I dunno but that's what I'm guessing.

Where are all my blogging Project Object fans? Ha ha - I'm spoiled because usually when Eric tours with Project Object or the Adrian Belew Power Trio, I come downstairs in the morning to all kinds of reviews but it's been sparse this time around...what, does Gail Zappa own the media now like the rest of the Republicans? Though I must admit, the only place I'm finding blurbs the last couple of days is in fact the Zappa forum board, so maybe not.

Here's another brief You Tube clip, this time featuring percussionist wizard Joshua Oxford though Eric is certainly prominent as well:

Yesterday while I was out playing ball with the dog my cell phone rang and it was one of the producers from Hollywood to talk some more about the film/television rights for Three Days in New York City and its naughty little sequel, Another Bite of the Apple, and there I am, trying to have an intelligent conversation while Monty kept nudging me to throw him the ball. 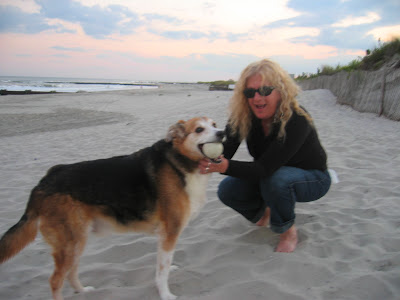 So while I'm trying to collect myself, the producer then proceeds to throw out the name of yet another actress for the role of Elizabeth -- this is someone who once dated Eric Clapton and after I picked my jaw off the ground, how did I respond? I proceeded to pester him about the theme song for the soundtrack because, speaking of tracks, I have a one track mind. The hell with focusing solely my career, I want Adrian and Julie and Eric to do the music.

Hey, if nothing else, I've always had my priorities straight. Play ball with the dog, think about my kids, and talk to Hollywood about film options -- and in that order.

Sadly, though, now that we're talking finances, I had to refer him to my agent so no more fun phone calls I'm guessing.

When I got back indoors, Julie was cooking some vegetarian rice and bean dish that smelled like armpits that were out in the desert for three weeks without deodorant but it ended up being delicious -- but just you wait until she wakes up this morning, she's in big trouble. She used my shower last night - the detachable spray hose, that is -- before she got into bed for the evening and she forgot to adjust the setting back to shower. As a result, I woke up at dawn today to write, got in the tub, turned on the water, and got a full spray of ice water in my face courtesy of the hose. This is the second time it happened this month and I.AM.PISSED. She is going to be officially put on notice that the next time this happens, I am marching into her bedroom with said hose and spraying her awake with a frigid blast and we'll see how she likes it. Okay, so the hose won't reach into her bedroom. But that's what paper cups are for.

Oh, I'm kidding. You all know I love Julie so much it hurts, and I'm thrilled she's dividing her time between our house and her boyfriend's these days while said boyfriend tours with his own band. But I'm surprised that my tortured screams of MOTHERF**KER in the shower this morning, which is a mere ten feet or so from her bedroom, didn't wake her up, let alone the whole neighborhood....though I did hear Gary giggling. (Nah, that's a lie...in fact, Saint Gary actually climbed out of bed to help me even though he was 99% asleep because I was so freaked out I couldn't fix the damn thing and continued to be sprayed non-stop until he came to my rescue)

Anyway, that's about it for me right now -- I have a book to write -- but indulge me while I post another link to the flash I have published over at Tuesday Shorts because I love, love, love that site and whole premise.

Later,
xo
Posted by RobinSlick at 7:30 AM