There are days I truly love my life... 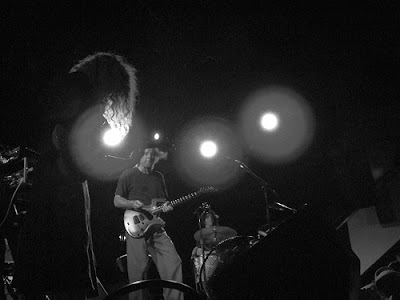 Julie Slick, Adrian Belew, and Eric Slick out on the west coast six months ago

There are days I truly love my life. How do you think it feels to be me, surfing by Adrian Belew's blog, and reading what that incredibly talented, incredible man has to say about my two offspring and their soon-to-be released CD:

"sunday I went to work with saul zonana who is mixing side four with me (and house-hunting in the nashville area.) we worked on the first 7 mixes of the live power trio. I'm a little dumbfounded (or maybe just a little dumb.) I had no idea what to expect. there is only one word I can say...

"I don't usually care for live rock records. even though I've been part of a few good ones. live jazz? absolutely. live classical? a must. but many live "rock" recordings have a hollowness like something is missing from the sound. most live rock records leave me wishing for the well-produced studio version. that's just my opinion. which explains why I have not made a live solo record until now. maybe it's because I've lived my life in a recording studio where things are never out of tune (at least not for long) and the sound is rich and full. maybe that's why I was so dumbfounded upon hearing the first 7 side four mixes.

I loved it! it gave me chills.

I felt that rare thing: passion.

the one component so favorable to a live record is the energy.

many live records today (in the "Idol Era") are heavily processed to iron out the imperfections. you're not going to have a "star" allow their voice to be out of tune. many records have added parts to enhance what could not actually be "performed". in a time when nearly everyone has ProTools it would be rare to hear something that wasn't doctored to death. those records are more hydrid studio/live than an actual "record" of the event and they somehow drain the synergy from the performance.

the passion and energy of side four makes it impossible for me to want to "doctor" anything. it sounds and feels like people voraciously enjoying playing music. eric and julie shine.

it sounds like a hot ass trio breathing together (pardon my french.)

I mean, really. Adrian thinks he has the chills, I have been reduced to quivering jello.

And the comments under each post on his blog! To much for me to copy here, but so exciting...you should click on the link provided above and go there, anyway, because Ade did a very cool question and answer thing yesterday with almost sixty comments on one post alone.

Then I find this over at Taylor Guitar Journal...and this is the HTML version, this appears in a beautiful PDF on line but god knows how to convert it so I'll just paste the quote in here and if Eric wakes up before I have to book out of here for today, I will see if he can help me because this comes from an actual publication that Taylor Guitars put out this year which is just gorgeous.
 
"LOAN RHINO
In early November, artist relationist Bob Borbonus spent some face time with guitar monster Adrian Belew before a show in San Diego’s coastal North County. Bob hung around for Adrian’s sound check (“his rig is sick”), and chatted with Belew about the T5 he’s been checking out. Though he was playing Parker Flys on the gig, Belew told Bob he loves the T5 and plans to perform with it soon.

Belew’s rhythm section accomplices are a ferocious brother/sister duo from Philly: drummer Eric Slick, 19, and his bass-playing sister Julie, 20, whom Bob assessed “are not of this world when it comes to music.” Appropriately enough, Taylor clinician and fellow prog-rock trailblazer Mike Keneally was front and center to enjoy the show.

In writing news, Noveltown Review got an awesome review the other day and they mention my article! Read about it right here.

Also, NL Belardes, editor in chief of Noveltown and author of the incredible Lords, Part One (I need to review this book as well as many others I've promised but certain circumstances have left me pressed for time...just know I will get to them all...anyway, Lords Part one is so freaking interesting and well-written with characters you can't believe actually exist but on second thought...yeah, you will believe it but to read about it in print...and the link to purchase it is on the right hand side here)...anyway, Nick interviews the amazing Lauren Baratz Logsted which I did not know until I just clicked on the link and I've now read all of Lauren's books and also need to review them as well -- to say she rocks would be a major understatement -- but I was mentioning Nick because not only did he contribute a wonderful story to the anthology I'm editing, 39 and holding...him, he designed the cover, which features the absolutely magnificent Matilda Kay:

Is it just me, or is that the sexiest bookcover ever?

Anyway, I am still accepting submissions for the anthology which will be published this fall and out in print in December, but the issue is filling up quickly and I've already gotten some incredible stories. Acceptance letters will not go out until the submission period of August 1 expires so if you are a writer and think you can send me something that fits the bill, please follow the guidelines listed on the link provided...I've also managed to snag a few literary notables for this project but even they haven't received their acceptance letters yet because I want this to be a mix of both established and new authors and again, because it's not fair to send acceptance letters out until the submission period closes...and I'm still fantasizing about receiving even a poem or haiku from people like Erica Jong and Neil Gaiman. (Way to go on the dog, Neil! I think all of us dog lovers were rooting for you bigtime to adopt him and I think you've managed to melt a few more million hearts if that's humanly possible. Now. How about posting a good, clear photo of you all in black while walking your oh-so-white dog. If that isn't a Kodak moment, what is?)

I also got an incredible fan letter from someone yesterday about Three Days in New York City...made my day...apparently my work of fiction mirrored his real life and part of his email reads:

I just wanted to tell you that I am a British gentleman who has experienced in minute detail what went down in your classic book 3 Days in New York...

(He went on to describe his friendship with an American woman)

Thanks so much for putting into words our story"

Hahahaha - I'm posting this because he wrote the words "classic book" which really made me smile. But yeah, Three Days in NYC, which is already over two years old, is starting to feel like a classic. It continues to sell and I continue to get fan mail. Now. All I need is for Hollywood to come calling and I can sit back and relax and not hyperventilate over the new book, which, by the way, I am not going to talk about anymore as per a very insightful interview at Lit Park that author Lance Reynald did with Heather McEllhatton. Heather's advice to other authors out there?

"My biggest advice is if you send your manuscript out to agents or publishers; keep that piece of information to yourself. Otherwise friends, family and co-workers will keep asking you, “How’s the book?” and after a month or two of hearing “How’s the book? How’s the book?” you want to throw a stapler at them and say “YOU CAN BE SURE IF THERE WAS NEWS ABOUT THE BOOK I WOULD TELL YOU. FOR THE LOVE OF GOD, STOP ASKING ME THAT.”

Just save yourself the entire ordeal and keep everything, (your ideas, your writing, your manuscript, your submissions) a secret until you have a book deal. Then you announce it all at once, people buy you champagne and no staplers are thrown."

Oh god, truer words were never written. You are not only saving yourself a ton of anguish by following her advice, you are saving all of your friends and family from utter boredom and wanting to throw a stapler of their own at you.

But err...since I have been bringing up Daddy Left Me Alone with God for months, let's just say I've gotten several very pleasing responses almost immediately and I'm currently considering all options.

And that's the last you'll hear from me until I (a) get the deal; or (b) decide I would rather pursue a career as groupie/unofficial publicist Mom instead (ducking as Eric and Julie shoot imaginary poison darts at me)(just kidding, just kidding) and travel the universe with The Adrian Belew Power Trio listening to the aforesaid "otherworldly" music for the rest of my life with my jaw firmly on the floor.

Let me tell you. Life could be a hell of a lot worse.

Email ThisBlogThis!Share to TwitterShare to FacebookShare to Pinterest
Labels: Erica Jong and Neil Gaiman...how about a haiku?, Matilida Kay is too sexy for this world; Nick Belardes is a kick ass writer and photographer; Adrian Belew is the world's reigning best rock guitarist
Newer Post Older Post Home