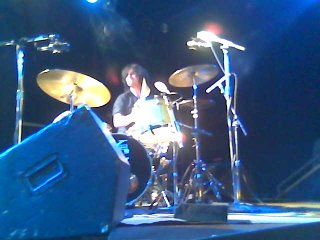 Eric Slick behind the drums at Slim's in San Francisco

So Julie and I are headed for New York City at the obscene hour of 6:00 a.m. this morning because we're into cramming like a month's worth of stuff into one weekend. It will be incredible to spend some one on one time with my daughter; we've already scoped out the best vintage stores, restaurants, foodie haunts (i.e., cool cooking supplies/Zabar and Zabar spin-offs), and music emporiums. And then of course tonight we're going to see Eric play with Fugazi's Joe Lally at the Lit Lounge.

Funny thing about that. I was worried about being the oldhead in a moshpit. As it turns out, Google blogsearch has informed me that tonight's concert is...a Chanuka Party!

"We're a one-party people! Life is all one big fucking party!

Chanuka parties will be happening all week. Here's the quick scoop on where Sholom will be:

I'm going to be offline until tomorrow night or Monday morning so I'll be back then with Fan Mail From Some Flounder Part II as well as a recap of our weekend.

In the meantime, thanks so much to all of you who voted me for Best Blogger 2006, Diarist. Out of 4,500 nominations, I came in at #5 in my category. That's like the coolest thing ever.

Next to that menorah, that is.

Okay, I have to run upstairs and throw some stuff into my overnight bag so we can get out of here on time.

Later,
xo
Posted by RobinSlick at 4:50 AM