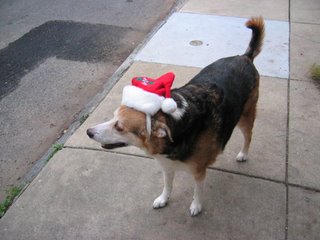 Monty dying of embarrassment on Christmas morning and if he could talk, he would have said "Mom! What are you doing to me! I thought you loved me!"...but at least I managed to get that shot of him before he ripped off his Santa hat in disgust.

So...much has occurred since I last posted -- the best Christmas ever, the death of James Brown...but I'm kind of taking a couple days off from serious blogging because it's just been too hectic around here -- Eric leaving to go on tour today, all kinds of stuff, really, but here's a couple things of interest.

Sometime this week I will post one of my favorite gifts -- lyrics to an MP3 which Julie and Eric wrote and recorded for me entitled "All I Want for Christmas is a Book Deal". They actually went through my entire blog for the year and said lyrics include some shout-outs which are hilarious. (Yeah, yeah, I do believe the name "Gaiman" is mentioned a few times). And of course I'll give the complete holiday run-down complete with who got what and accompanying photos.

Also, thank you to the many people who came to my rescue and translated the Hungarian groupie piece. My favorite was an email I received as follows:

Your cry for Hungarian help went out to everyone in the world who gets a Google e-mail alert when the word "Hungarian" appears in new web content. There aren't many of us -- mainly journalist types like myself, I imagine, who cover this country, or hacks at the Hungary desk at CIA headquarters.

I'll give you a quick translation of the title, lead and section on you -- I'll just did the subtitles on the other persons mentioned. Note that some idioms were very colloquial and I may have fudged one or two by putting them in non-idiomatic language where I couldn't think of a corresponding English expression.

Groupies, number 3 in a series - Where do we go from here?

We hope you've noticed our little series of articles in which we spread information (as well as rumors, which perhaps cannot be classified as information, but are perhaps even more important) on chicks that hang around rockers. We now continue by introducing a few of these chicks who started as groupies, but who did not end up in detox or the abortion clinic, instead turning their past as rock kittens into capital to conquer the world. Let's look at the aces among groupies!

Marianne Faithful - Who Came Into Her Own

In any case, her blog is award-winning, and certainly makes for interesting reading. It also proves that Robin's life - at least until now - really does revolve around rock. Of course now, she mainly pushes her children - her daughter plays bass guitar and her son is a drummer. We have to add: who wouldn't want a mom like her?


Bebe Buell - The Posh One

Ha ha - thanks T, that was awesome. And as for you, Dr. Gyulai...heh...you need to do more research and that's all I'm saying on the subject...other than the only people who have read "Daddy Left Me Alone with God" are me and and an agent and she doesn't even have the (yet again) newly revised/completed version because I had an epiphany the other evening and ripped out a chapter and added a new one.

So I'm hoping my alleged "memoir" turns out to be more than mildly successful. As Eric and Julie wrote in the above mentioned song, all I really do want for Christmas is a book deal. For that book, anyway. I already have book deals and if you click on the links on the right, you can even buy them. (Oy...I hate the saleswoman aspect of this business, I really do)

Right. I'm off to breakfast with my son and daughter to meet with my brother and his wife and two young sons -- they are in from Connecticut for the holidays and this will definitely be another highlight of the season.

Later,
xo
Posted by RobinSlick at 6:45 AM