By the time they got to Phoenix (Okay, kill me now for typing that but yikes I'm feeling sentimental today) 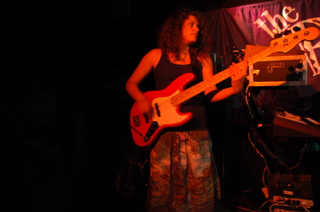 Before I start "talking", I just saw that Eric has once again updated his tour blog and all I can say is, he is one hell of a writer and I take full credit for his talent. Ha! Well, his dad takes credit for the music -- Gary is an awesome guitar player whose musical influence is one of the reasons Eric and Julie are Eric and Julie and Adrian -- so please let me have my one moment in the sun in this family. (Insert smiley face emoticon here)

One of the coolest things about being a writer and having this blog is that people who attend the Belew shows find me, and I've been getting emails from all sorts of fans who are attending the shows all over the west coast.

Joel is a New York native and has been shooting pics for forty-four years; now he lives in Phoenix. Besides supplying me with the above photo of Julie (and the ones I'm also going to post below), Joel wrote me the following review of the Adrian Belew Power Trio's performance in Arizona:

"As always Mr Belew is right on with his eclectic and progressive guitar playing. As for your wonderful children Julie and Eric allow me to indulge:

If Adrian took away one thing (among many) from Mr Zappa, I hope that was Frank's insight to discover, nurture and promote untapped talent in musical genius. If he has acquired this ear for talent, then all I can say is that Julie and Eric will (if they choose to continue) have an incredible career as musicians. They are truly fine young talented people and also are not affected by the egomaniacal world we are surrounded by today in a lot of the music (or crap) coming out on bits and bytes.

You see, true artists need not surround themselves with such tripe, as true artists rely on their own merit as musicians that enhance the lives of folks like myself. Egos diminish this talent in many of today's artists. I can truly say that as a pretty good judge of people, Julie and Eric are true and pure musicians in every sense of the word when they are up on stage. As their Mom, you would be the best judge of this.

So, Robin and Gary, be proud that your have nurtured such wonderful people that will bring years of enjoyment to the ears of this world!!"
*****

Man, that makes me cry every time I read it. And I adore what he has to say...very clever, the "bit and bytes", isn't it? So, so true.

Here are a few more photos Joel took of the trio: 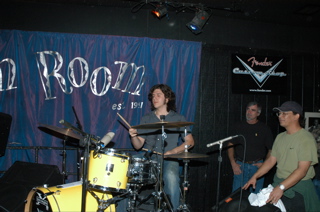 Tbere's my Eric, or Eric the Animal as he's called on drumming forum boards all across the universe (ducking because I know Eric is going to throw a cyber shoe at my head when he reads this) 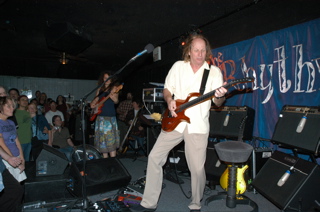 And the man responsible for my family's current state of bliss, Mr. Adrian Belew (with a lovely shot of Julie in the background, of course)

Now this next shot is most interesting. Normally I would be spilling the whole story behind it but Eric has been keeping such an awesome tour blog that I don't want to steal his glory and talk about what happened following the show. Plus, I understand there's a lot more pictures to "prove it". So let me instead identify some of the people in this photo... 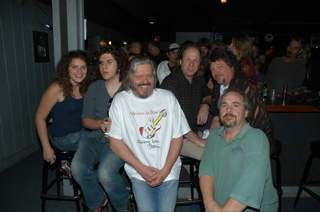 Okay, the man front and center wearing the Twang Bar King t-shirt is my husband, Gary (ha ha - Gary has decided I can post his pic after all on the evil internet so I guess I lose my Neil Gaiman with the secret hidden spouse status har har). Obviously you know Julie, Eric, and Adrian. But standing next to Adrian is the mystery man, the guy who provided the Belews and the Slicks with one hell of an evening following the show -- he's the promoter, Danny Zelisko. The man front row, right in the green shirt works for Danny - his name is Beef. God I love that name. Beef. Remind me to use that in a story. Anyway, here's just a tiny taste of who Danny is.

Oh hell. I can't keep this in. Okay, Danny invited everyone back to his house after the show...he lives in a Frank Lloyd Wright home on the side of a mountain...and he's got a guitar signed by all four of the Beatles.

That's just the tip of the iceberg. I'd better shut up now. Eric will kill me and I know he must be dying to tell this whole story himself.

But have I mentioned that Baby Hippie Gary saw the Beatles with his mother in 1966 and if I go upstairs and snoop in his top drawer, he still has the original ticket stubs. If he didn't take my camera with him to the west coast, I'd be up there taking a shot right now. But yeah, Gary was in the Beatle Fan Club until it finally dis...dismembered? in like 1980. So to say he's a Beatle freak is putting it mildly...and how funny that this goes perfectly in sync with Susan Henderson's Question of the Week at Lit Park today.

Alrighty, then. I'd better get off this topic. So, let's talk about who else has come to the shows. We have the guitar player for the Tubes (sorry...I don't know his name), and the man I mention above, Dan Tomlinson. As a fellow drummer, Dan was really taken with Eric's playing and he immediately contacted me the next day and actually made some phone calls to try and get Eric endorsements which would be totally awesome. If you do a little research on Dan, you'll see he was with Lyle Lovett's band, played on The Tonight Show...anyway, it's just so cool that he reached out to Eric like that and really wanted to help him get said endorsements because face it, drum equipment is expensive and Eric goes through massive quantities of sticks, drum heads, pedals...you name it.

Yesterday the band had the night off so they drove to California - they play at the Belly Up Tavern in San Diego tonight and Eric already spoke with Mike Keneally and he's coming to the show tonight...sigh...yet another great moment I'm missing.

But I will say this. I'm really happy for my family and thrilled Gary is getting a chance to see the west coast and bond with J&E and the Belews. As for me, while I am getting a lot of writing done, I'm getting absolutely no sleep (what's with all those strange noises I'm hearing in the middle of the night and why does the dog seem to think it's necessary that he drape all 65 of his pounds across my chest no matter which way I turn)...and worse, I am eating like a little spoiled kid...meaning, one night I had chocolate cake for dinner, last night I didn't eat at all, but the fabulous Julie made me fresh salmon cakes which are in the freezer right now so I'm going to be good tonight and cook 'em up -- she even left me instructions on how to make an accompanying chipolte dipping sauce.

Arghhh...who am I kidding. I MISS MY FAMILY! And I think I'm in shock that they won't be home until next Thursday. But hey, I really do believe I will have two finished novels ready to go by then.

At least in theory.

Oh. One final thing before I head into the kitchen and fry up some salmon. I would be remiss if I didn't say VOTE, DAMN IT! LET'S GET THOSE REPUBLICAN FUCKERS OUT OF OFFICE!