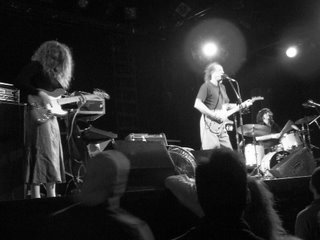 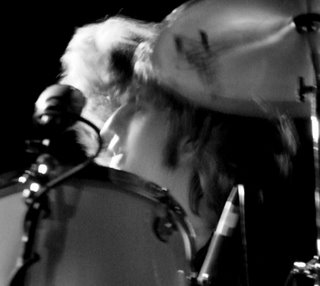 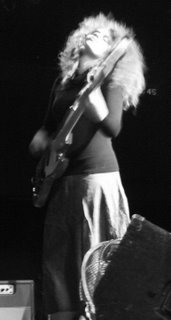 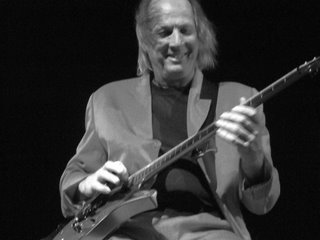 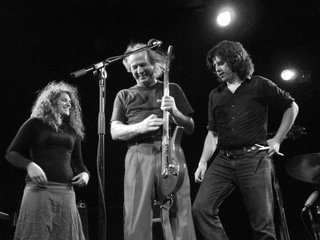 I thought for a change of pace I'd post some very cool black and white art shots of the Adrian Belew Power Trio taken last night in Santa Cruz, California...but you can view the whole incredible slide show, which includes many more amazing shots both in color and black and white, courtesy of Daryl Darko, right here. I haven't talked to my family yet as to how the show went or any other details, but I will report back as soon as I do. I did talk to Gary before I went to bed last night, which was 8:00 p.m. Pacific time and 11:00 p.m. here, and he said that Santa Cruz was an amazing town...hippies everywhere and really cool shops owned by people and not corporations. Have I mentioned how jealous I am to not be on this tour? Gah!

But you know, the internet is really amazing. I continue to make friends daily via this blog and people who find it after attending Belew shows. Daryl, who took the above photos, really touched me this morning when I read his most recent blog post.

I don't talk about my "former" pre-writer life a lot, but for many years, I worked for a wonderful man named Larry Friedman who was more than an employer -- he is a mentor, best friend, and major influence in my life. I went to work for him as a very young girl and one thing he taught me was to always thank people for a job well done and make them feel appreciated. Larry undid years of damage suffered in my childhood by giving me a sense of self-worth and confidence...he made me feel good about myself every single day. When he retired four years ago, he broke my heart but realizing I couldn't stay in that office without him, his retirement gave me the chance to pursue my dream of being a writer. Anyway, so as I've been google searching every morning for blurbs and photos about the Adrian Belew Power Trio's west coast tour this week and last, I make sure that I leave grateful thank yous and comments on the blogs of strangers kind enough to post about shows they've seen and every single one of them has written back to me...and I now have many new acquaintences this week -- living everywhere from Austin, Texas to all over California -- who I know will be friends for life.

Life is pretty funny, though. I see Daryl has a poll on his blog which asks:

Who would you most love to have a cup of coffee with?

Ha ha, notice name #3. Naturally, I voted. Now listen. Check out the current results. How in the hell is Christopher Walken beating Bob Dylan and Neil Gaiman? C'mon, hit the "back button" on that poll and vote. This is a travesty!
****
Okay, it occurs to me that I now have five days left before my family returns and two novels to wrap up, so I must get off-line and start writing. But before I go, here's the new cover for Three Days in New York City -- I gave you the UK link because it's been doing much better in sales over in England (I wonder why ha ha)...and it's got a new cover because for some unknown reason, Borders wasn't happy with it and asked for a new design before stocking it on their shelves. Another Bite of the Apple will have a similar cover, but with a red bitten apple instead and a few other differences...I'll post it when I get it from my publisher. 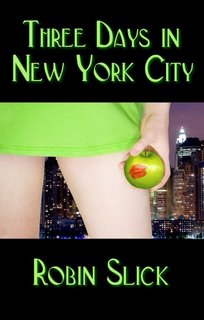 Finally, for all of your writers out there, this totally cracked me up. It's called "About That Novel You've Been Writing...." (Family Guy is like one of my favorite shows on television right now. What the hell is going on with the Simpsons? Did they fire all of their writers? Good god, they are spiraling downhill this season -- some of their shows this season are literally unwatchable -- and it's breaking my heart. Oh Matt G? I'm available and I'm funny! Hire me!)