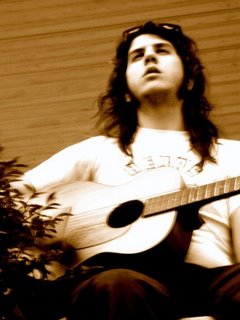 A great pre Gaiman haircut photo of Eric Slick I just found on the desktop in a file I never knew existed: Eric's pics. Woo hoo, a treasure trove in there.

Speaking of treasures, Google stalking has provided me with a freaking chest of them this morning.

First, I am stunned and overjoyed to see a mention today in Robert Fripp's diary as follows:

"An enjoyable performance. Probably, we played well, but I have no idea...

Okay, now I can get over feeling like a stupid, babbling git when meeeting Robert backstage. Whew. (Right. Like there's any chance of that. But still...)

See yesterday's post for a link to our recipe for said brownies of wonderment, terror, and delight. Ha. I think that will now be their official name.

Next, and trust me, I know how these things go with Amazon and by this afternoon it will probably be gone, but at this very moment, Three Days in New York City is inexplicably #5 on the Amazon UK best seller list?! Are you kidding me? I almost fell off my chair when I saw that.

Also, I learned that Rebellion, New Voices of Fiction, an anthology in which I have a short story "Daddy Left Me Alone With God" and which is the name and basis for my new novel, is up for a USA Book News Best of 2006 Independent Press Award. I may have already mentioned that Another Bite of the Apple is nominated for an Eppie Award so that's pretty cool -- finalists will be announced the first week of December so I've got my fingers crossed, white candles lit, etc.

Here's a link to a Dutch review of the Adrian Belew Power Trio's concert in the Netherlands...I tried using Babblefish to translate it and it's funny as hell but hard to make sense of...if these things are important to you, go for it, if not, just click on the link and look at the great pictures of Adrian, Julie, and Eric on stage.

Speaking of Eric, special thanks to Susan Henderson, who was kind enough to endure the torture of a truly bizarre public radio station from St. Louis (which streamed live on line) with me yesterday in hopes of hearing my son on the radio with Mike Keneally and Bryan Beller. As it turned out, Eric did not make it to the radio station in time because his flight was delayed. Why was it delayed? Because Air Force One, carrying our (gag) illustrious leader, was landing at the same airport and Eric's plane was forced to stay in the air in a holding pattern for thirty minutes. As I told Sue, it's a good thing I wasn't on that plane because I surely would have lost it and would currently be front page headlines...ack...like I'm not on enough subversive lists already har har. (I am a voracious letter writer...starting with Watergate when I was a baby hippie...escalating big time when I was convinced the CIA killed John Lennon...and well, if you think I've changed now, forget about it...especially with the power of email. And I wonder why I'm pulled out of line for searches in every airport I visit. Yeah, that's right. Big bad me.)

Anyway, as it turned out, Mike and Bryan mentioned Eric's name three times and said he was an absolutely phenomenal drummer so at least I got to hear that...and if you would like to have a listen at just what Sue and I had to go through yesterday and trust me, I'm not exaggerating, it was pure torture, the radio show is archived right here. Actually, let me take that back. Mike and Bryan were brilliant and did a totally awesome live performance on air which you can also hear by clicking on that link. It's the DJ with his rather idiotic statements and his choice of music which made us both queasy. Sue made me laugh out loud when she emailed me during all this and told me she was carefully marking down the artists and names of songs this bozo played on his show so that she could present me with a gift next time she saw me.

Thanks, Sue, and in return I will be presenting you with a special flash fiction collection...never mind...I'm getting myself in enough trouble here as it is.

Later,
xo
Posted by RobinSlick at 9:55 AM