So remember a few days ago I mentioned I was solicited to edit a new anthology? Here's the official press release (and ignore that comment I made earlier where I said I probably wouldn't be writing any more erotica. Ha!)

You won't truly experience a hot flash until you get a hold of HIM!

Calling all heroines over 40! We want to read your most vivid fantasies, live vicariously through your smoldering passions, and delight in your continued defiance against gravity. Authors don't necessarily have to be over 40 to submit, the only requisites for this anthology are that:

1) all stories must be primarily heterosexual (M/F, but if a gal can get two hunks for the price of one orgasm or do more than flirt with the lady next door, we'll take a look at that, too!)

2) all heroines must be portrayed as 40 and over (and everybody involved must be of legal age, of course), and

3) all stories must burn longer than than the hottest flash.

You know the poem that goes "When I'm an old woman I will wear purple?" How about turning HIM purple? How about taking Demi and Ashton to the next level? How about stories of reunited passion with a high school sweetheart after spending decades apart? How about rekindling the fire with hubby on your 30th anniversary? The kids are gone, the pets have run away, it's just you and him. Make the most of it, then tell us about it!

STORY LENGTH: We're looking anywhere from 5K-15K. Please visit the Phaze website for formatting guidelines, and when you're ready send your submissions to: submissions@ phaze.com with OVER 40 STORY SUBMISSION in the subject header. NO SIMULTANEOUS SUBMISSIONS FOR THIS ANTHOLOGY PLEASE!

Reprints will be considered if you have complete control of the rights.

ABOUT ROBIN SLICK
Robin Slick is the author of Three Days in New York City, Another Bite of the Apple, and "Buenos Noches, Justine," erotic comedies published by Phaze. Robin's short stories have appeared in print and on the web everywhere from heady places like In Posse Review and Slow Trains Literary Journal to give-heady places like Clean Sheets. She lives vicariously through her rock star offspring Julie and Eric Slick, who were featured in the Picturehouse Films documentary, Rock School, and are now members of the Adrian Belew Power Trio. Visit her online at www.robinslick. com and www.inherownwrite. blogspot. com.

One thing I want to add to this is that I'm pretty selective and will be choosing work that is way over and above the usual formulatic romance/erotica...it must also be literary in nature. By that I mean your writing must be of the highest quality and either make me smile from your brilliance and wit...or make me, um, run upstairs unable to remember my name (ha). (But no, I will not accept a story just because you write a love scene with me and Neil Gaiman in it so don't even try) 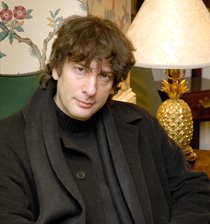 Anyway, I'm putting out the call to all of my friends and colleagues, those of you from Zoetrope Studios as well...let's make this anthology something incredibly special. I also want to add that Phaze Publishing is a subsidiary of Mundania Press -- with one of their sci fi authors being the fabulously talented Piers Anthony -- and has undergone major changes with a brand new editor in charge. All of our print books will now be carried by not only Borders but Barnes and Noble, Chapters, and many independent book sellers as well.

In other writing news, Susan Henderson comes clean about her obsessions over at Lit Park today and I swear, Sue really is my long lost sister. Sue, I will admit this to you here and Eric, if you are reading this, I advise you to stop now before you turn purple. Okay? Okay. You want to talk about obsessions? When I was fourteen years old, I was so obsessed with a boy (Gary II...I had like seven Garys in my life...I think their mothers were all in love with Gary Cooper and it was "the name" of the fifties and sixties) our first date was my accompanying him on a night of crime. Yep, he was a fourteen year old hoodlum who took me on a rampage with a piece of metal pipe which he used to crack open everything from parking meters to the change machines at the local laundromat, after which, when we scored $5.00 in quarters, he treated me to a can of warm beer he'd been hiding in his jacket all night and a gave me my first hickey on the counters where you fold your clean clothing. I not only saved the piece of pipe in my memory box, I saved his cigarette butts.

And now you know how sick I really am.

Ha ha - I just remembered something I haven't thought about in years. After I got that hickey, I was so paranoid I wore turtleneck sweaters for a week, even to bed. My way cool mother never ever raised an eyebrow at me and I'm sure she knew what I was hiding, but for some reason, it was important to me that she didn't see it.

I would however be humiliated by my said mom at breakfast a few years later when Gary III and I were dating and she innocently replied "Oh, by the way, Robin, I washed Gary's handkerchief -- I found it on the basement floor".

Ahem. I don't suppose I need to go into any details here about that, huh.

Ah, my old basement with the ratty sofa and black and white t.v. Gary III and I held the world's record for getting our clothes back on the minute we heard footsteps approaching the stairs.

And to wrap this post up before I do start sobbing, I just learned that Another Bite of the Apple and Buenos Noches, Justine received a couple more great reviews -- right here and here.

"Robin Slick has created a lighthearted, yet realistic tale of a woman who’s in search of herself....I really enjoyed this story with its fast pace, its convoluted twists and turns, and the first person point of view." (from review of Another Bite)

"...Intimate encounters are well detailed and adventurous, and the reader is kept guessing as to who will be Justine's sexual partner. For a quick steamy read, pick up Robin Slick's Buenos Noches, Justine today!"

That's pretty cool...and much to my surprise and pleasure, Another Bite, Justine, and Three Days in New York City -- which is almost two years old! -- continue to dominate the erotica best seller list which is why I've changed my position and will continue to dabble in that genre. Truth to tell (ha ha - I have Gaiman's American Gods on my mind still, which to me had many highly erotic scenes in it)...I do enjoy writing it because I know I break out of the typical genre and incorporate real writing and a lot of humor in my work. Because really, if you can't laugh and/or smile at certain sexual situations, you aren't having a good time. Or you aren't doing it right. (Ha ha - American Gods again)