Why the author has not felt like blogging this week... 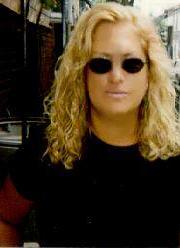 Why am I hiding behind my shades again? Why haven't I blogged since Wednesday?

Man, what a tremendous hassle I've been through for the past several days. And all because over a year and a half ago, I wrote some nasty things in this blog about a superstar rock and roll "phony". Meaning, I did a piece about a guy who is ultra rich and famous and has many fans despite having absolutely no talent -- someone who has been blatantly ripping off the public for years and years and laughing all the way to the bank.

Somehow, when you google this guy's name now, the first thing that comes up is an actual photo at the top of the page -- and this isn't Google images, this is Google itself, and when you click on it, it actually gives the link to my blog and the post I made in 2005. How do I know this? Over the last couple of days, I've been getting literally hundreds of hate emails from his fans who are now reading my aforesaid blogpost. At first I was so pissed off I was going to write a new one where I shredded him even worse, but then I realized it would frustrate said fans more if I simply removed the old post and when they click on his photo over at Google, they will find nothing. So that's what I did.

As if this wasn't bad enough, I got into trouble again a day later.

A very cool and talented reporter in the Philadelphia area is going to try and do a story about Julie and Eric and The Adrian Belew Power Trio before their show at the World Cafe Live on August 14 (and click on that link and get your tickets! I spoke to WCL and the show is selling out with just a week more to go). Naturally, as a good reporter he googled the kids where much to my mortification he found a little blurb I wrote a month or so taking a bit of offense with what he'd written about J&E in our local newspaper when they were first hired by Adrian Belew. I mean, I didn't trash the guy, but I did, um, beg to differ with a few things he wrote and well, he found my blogpost where I spelled it out. Luckily, he's a good guy and funny as hell and copied my blogpost and sent it to me in an email with the notation "I still like you anyway" because by that time, we were emailing back and forth and he had kind of a handle on me.

But nevertheless, I almost had a heart attack.

Therefore, in an effort to bury my head in the sand, I went out to dinner the other night with Julie at a very trendy downtown restaurant which shall go unnamed. Why won't I name it? Because literally minutes after eating there, Julie came down with scombroid poisoning. What the hell is scombroid poisoning? I never heard of it before in my life and I'm assuming most people reading this don't know what it is, either, which is why I gave you guys the link. It was one of the most terrifying nights of our lives. Julie got the symptoms within minutes from a dish -- marlin with fruit salsa -- which was one of their "specials" that evening but at the time, I thought she had sunstroke because she had been out earlier that afternoon in good old Philadelphia 102 degree summer heat. When we got home and did internet research we realized right away it was scombroid poisoning so after things calmed down a bit, I telephoned the restaurant to let them know so that no one else would get sick. I actually called them all apologetic, first prefacing my phone call with "I'm not litigious, I would never sue you for this, but I think you should know..."

And the girl who answered the phone just kept saying "Okay" and didn't ask me what Julie ordered, even though there were three specials that evening; she didn't ask how Julie was doing nor offer to pay for any medical expenses; she didn't even put her manager on the phone. All I got were three dumb-assed "Okays" which caused me to slam down the phone and immediately go on line to email the restaurant. Only in spite of having a sophisticated website, for their contact information they have no email address, just the same phone number I called. I've been debating what to do. I would send them an old fashioned snail mail letter but what's the use? I certainly don't want them to send me a gift certificate for a free meal there. (By the way, they have no air conditioning. They lied and said it was on but trust me, they sat us under a ceiling fan and then served us warm water. I never, ever should have let Julie order fish...she's a vegetarian who will eat it on occasion but I guess she'll have second thoughts about that now) So I could do you all a public service and name the restaurant and go into more graphic detail about what happened to Julie...but I don't want any more hate mail and my luck, it will end up being ME who gets sued. But if you live in downtown Philly and want to know the name of the place, email me, because it's really obvious they don't have proper refrigeration and you can save yourself a night of projectile vomiting among other highlights.

In case anyone is wondering, Julie is now fine...she was very sick for several hours but after two antihistamine tablets took effect, she finally crashed out and woke up feeling better tho' hungover from the medication.

In other, better news, Eric has finally updated his tour blog. And we're all way excited about the resumption of the tour starting Tuesday night at B.B. King's in New York City. I'll be there of course and if anyone from NYC wants to meet up, drop me a note.

Okay then. Here's the plan. From now on, I'm going to try and use this blog for positive things only. My writing successes, my friends' writing successes, and of course, all of Julie and Eric's successes. Oh, and Neil Gaiman, who, in this photo, looks very much like Julie the night she had scombroid poisoning. Flushed and pink, that is...only on him it looks beyond good, huh. 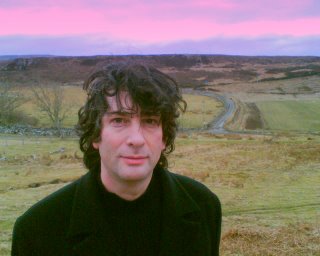 So yeah, only positive things here from now on.

And if you believe that...

Later,
xo
Posted by RobinSlick at 9:40 AM