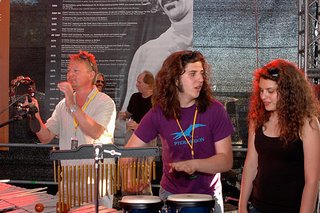 Okay, obviously that's Eric and Julie on stage -- but if you peer behind them, you'll see Adrian Belew talking with their dad, who really has the hippie thing going on these days in like every way imaginable. Yay, Gary! The guy to the left of Eric is a musician from a French Zappa cover band.

Heart be still, The Adrian Belew Power Trio plays Philadelphia tonight. I'll be the one jumping up and down screaming and fainting up at the front of the stage. Funny. As I'm typing this, I'm remembering another conversation Gary and I had at BB Kings Tuesday night with Adrian Belew and his engineer, John Sinks. Gary and Adrian both saw the Beatles live (can you imagine?) and talked about the audience going into one long extended scream and it was the same way when A Hard Day's Night was released into movie theaters. Girls fainted and shouted throughout. Never having had the, um, privilege (gag) of attending boy band concerts, I wonder if that kind of thing still exists. Probably, huh. Bah! I want to hear the music!