Eric Slick and Sarah Zimmerman sitting in with the Bustle in Your Hedgrow performers in New York City on August 28, 2006 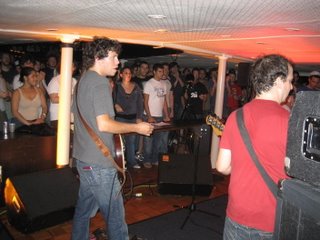 There's the audience being wowed by the band, which included members of Benevento/Russo and Ween.

So Eric Slick continues to rack up more great reviews wherever he plays -- this one is from Monday night's Bustle in Your Hedgrow performance in New York:

I'm not sure if it's National Jaundice Awareness Week, but the Empire State Building emanated a bright yellow glow last night. The skyline sure did look purty from the Hudson River. So what the fuck was I doing on a boat on a mislabeled tidal estuary following a five-day meth bachelor party binge that begged for a solid Monday night's rest?

The occasional quasi-supergroup cover band known as Bustle In Your Hedgerow rocked the Rocks Off Boat Cruise for three hours last night. And between December's ridiculous performance at the Tribeca Rock Club and the promise of a free ducat, I felt there was no way in good conscience I could have sat on my couch while the boat circled our little island. I'm still hurtin' badly today, but hot damn am I glad I got off my ass and found that fuckin' (black) dog.

Last night also marked the return to live giggery for guitarist Scott Metzger, who brilliantly deParted a less-than-stellar techno-jamband about five weeks ago. Metzger joined his old friends Diamond Dave Dreiwitz, Sir Joe Russo and Untitled Marco Benevento on the three-year anniversary of the very first Bustle performance, and it's almost as if the four of them have been playing together nonstop since that night's debut. Talk about cohesiveness...I think this is the kind of overwhelming tightness to which pedophiles are attracted. That's a horrible analogy, sure, but dead on.

The boat was crowded but not nearly packed, and watching people try to dance in the small space when the waters whipped the ship around was pretty hilarious. But dance we all did -- it helps when you're prodded by four insanely talented musicians that get together rarely to cover one of the greatest rock bands of all time. What's more impressive is how amazing they do it, though. I could maybe perhaps kinda use a lead singer up there, but musically, I'm not sure I've heard anyone cover anything so incredibly in the history of live music. How's that for all-out fluffing hyperbole?

Marco and Scott re-create the classic Zeppelin sound, but it's Joe and Dave that make this band as perfect as it is. Dave could have piloted the Enola Gay because he drops serious, destructive bombs all over the Japs place, and sans analogy, Joe may actually be the best drummer on the planet. If anyone can fill the dead shoes of John Bonham, it's certainly this human octopus pictured above that simultaneously makes it look so effortless and yet so difficult. Parking my no-talent ass directly next to him throughout the whole second set was like a eunich watching an orgy.

The remaining highlight that I'd be remiss if I didn't point out: the two School of Rockers that sat in with Marco and Dave to open the second set. The female guitarist made Metzger look like a chump and the young longhair on drums told Russo to go home and get his fuckin' shinebox. Well, maybe they weren't that great, but they really were phenomenal. These two folks have a very fine future ahead of 'em (a kind anonymous commenter chimes in: "The special guests were Sarah Zimmerman on guitar and vocals and Eric Slick on drums...").

I took some video footage of Immigrant Song and the not-so- impromptu DanjaBoots two-song encore ("We're out of Zeppelin tunes," I heard Joe say), but I've yet to upload the clips. Hopefully one of the videos does justice to that rendition of Immigrant Song. I hate to use the Ace-cliche "off the charts...we need new charts" here, but good lord, sometimes I just have no words for greatness.

Nah, it's not just me. In fact, if you click on the link I provided for this review, you'll see comments from a lot more people and they pretty much say the same.

Eric, Sarah, and Julie have a new project planned together with a gig sometime in October at Asbury Lanes. More on that in a future post.

In writing news, yesterday I was interviewed by Bloggasm and hey Sid Smith, I not only got to slip in my gratuitous reference to Neil Gaiman which wasn't really gratuitous at all, I also got to slip in one for you...also not gratuitous. Anyway, thank you to Simon Owens at Bloggasm (Bloggasm. Is that a great name or what -- wish I'd thought of it!) who did an awesome job and asked me all the right questions. Please also see his fabulous interview of my good pal, Myfanwy Collins, who has all kinds of cool stuff going on right now and had some very intersting things to say.

Speaking of Neil Gaiman, and when don't I, this is for Susan Henderson, who has a new and exciting blog about to launch in just two days...wait, I hope I'm right about that...Sue, you are launching on a Saturday? Anyway, I think Neil posted this in his blog while you were in Virginia so in case you missed it...oh god...here he is slightly inebriated at a wedding a few weeks ago: 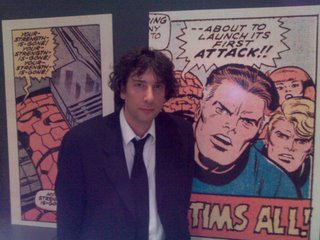 Yeah, I know. I had to hold on to the desk for support after seeing that, too.

Let's see. What else. Another Bite of the Apple continues to remain "highest rated in erotica" over at Fictionwise. That's had me smiling all week.

Okay, time for a nice cup of tea. I've been at the writing thing since 3:00 a.m. This insomnia stuff has got to stop! I'm hoping that when I take my annual internet free, two weeks at the beach next month I'll get back on a better sleep pattern -- if not, there may be a prescription for Ambien in my future.

Later,
xo
Posted by RobinSlick at 5:56 AM