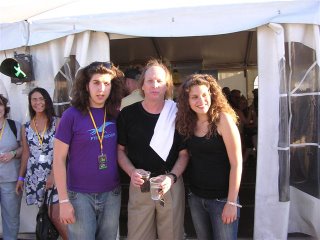 So it's time to play catch up on all the news happening around here as concerns Ms. Julie Slick, Mr. Eric Slick, the Adrian Belew Power Trio, etc., etc.

First of all, Andrew Greenaway penned his annual diary of Zappanale 17, but of course me being me will cut and paste one pertinent part right here. However, please click on the link as Andrew does a great job of summing up the various performances and there are more mentions of my family, including the elusive Gary, within.

"...it’s time for Mr Adrian Belew’s set proper. Outside of Keneally and Vai, he’s one of the few whose career away from Frank has been truly apart and worthwhile. Stripped to a three piece with borrowed/missing effects, he was just unfassible (though his vox did get a little lost in the mix somewhere). Young Eric and Julie Slick (on drum ‘n’ bass) were amazing – I already knew Eric was, but the barefoot Contessa was equally impressive. Adrian is rightly proud of this current Power Trio – saying “Gee, I wish I could do that. Don’t you wish you could do that?” after ES’s audacious drum solo. Only 19 and he knows how to. What more can I say about this elixir? How did Julie manage to replicate Tony Levin’s stick on her fretted bass throughout Elephant Talk? How good was the lone rhino on The Lone Rhinoceros? Shame they were unable to play Matchless Man due to the absence of Ade’s backward guitar gizmo..."

United Mutations has a nice blurb on their site and again, here's a little teaser:

"... Headliner Adrian Belew did what everyone expected from him. He played an astonishing set: old and new songs, both from his solo career as from King Crimson.

I was told that his gear-box was missing, but I don't think anyone noticed. The loop-box worked and the feedback sounded like it should. Another highlight. And with former PGSoR's Julie Slick on bass and Eric Slick on drums this power trio was the perfect ending of an impressive festival..."

The Zappateers have a ton of photos in their scrapbook (obviously click on Z17)...

And so does Mose Moses -- click on news and photos.

Another favorite would have to be comments from this guy, who says:

"...So I can say that Adrian Belew knocked out a killer set despite not having any of his regular amps or effects. He is admittedly gear-dependent for some things, but if you are a listener you know that a lot of his music is clean or straight guitar. So he toughed it out by playing the set with his parker fly into a marshall half stack. He had a boomerang that I think he packed in his luggage, but it was only used a few times.

The result is that I can go to my grave knowing that I got a really special chance to see Belew melt some faces, and I saw it from the rail in front of the stage. Jaw freakin dropping. Big Electric Cat with just that pure raunch tone. Heaven. Adrian was bugged about the gear delay (it showed up 3 hours after his set), but the set itself was spectacular. His trio with Eric Slick and Julie Slick is super heavy. Look for a shot of Julie in the Girls with Basses thread. Eric is about 19 or 20 years old and is already one of the best small-kit rock drummer I have heard. Julie is a few years his elder and she is everything you could want in a rock bassist. These siblings are "grads" of the Paul Green School of Rock Music (see: Rock School, the documentary)."

Naturally, I had to see what the "Girls with Basses Thread" was and um, almost had a heart attack -- not really but I was momentarily taken aback as I wondered what treatment Julie would be getting when I found the applicable "shot of Julie" he mentions as here was the first photo/post I came across: 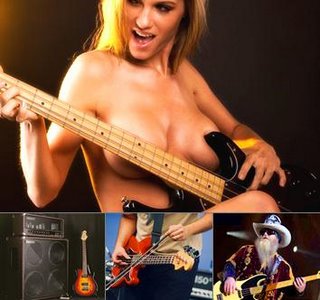 But no, I should have known better and here's how they posted about Julie: 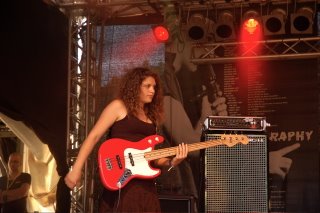 "I caught Julie with Adrian Belew at the Zappanale 17 festival in Bad Doberan, Germany, July 16, 2006. Her brother Eric is the drummer in Adrian's new power-trio. She can rock that bass, for real."

So how cool is that?

Anyway, things have been crazy here as the kids get ready to resume their tour with Adrian Belew this coming Tuesday night at B.B. King's in New York City. Julie has been working non-stop building her dream state of the art recording studio where she hopes to record various bands during her down time on the Belew tour. Eric meanwhile is picking up gigs galore, including a few with Dave Dreiwitz from Ween and Chris Harford that are very, very interesting. Some possibilities include playing an outdoor gig at Grand Central Station in NYC and oh my god, opening for one of the headliners at a huge closing concert planned for CBGB's at the end of September. I think Eric may also be doing a gig this weekend with some of his fellow musicians from Project Object and as soon as I get those details, I'll immediately post where and when, though I vaguely remember him telling me something about "Newark, NJ" when I was in and out of sleep last night...I crashed on the sofa because my bedroom air-conditioning picked a major heat wave to die on me. It was awesome Eric came home when he did, because normally I would have been asleep at midnight, and instead I was instantly wide awake, which meant I immediately turned on the Jay Leno show so that I could maybe, possibly, fingers crossed hear Lisa Kudrow plug Ellen Meister's fabulous new book. And she did! She did! Lisa narrated the audio version and she told Jay a funny story about how she thought she had to do different voices of all the characters instead of just doing a straight read...and so that's what she did, and she was warm and wonderful but I think all of us who are Ellen's friend and watching Lisa all had collective heart attacks when for a brief moment, she totally forgot the name of the book, paused, stammered, and then blurted out "Secret Confessions of the Applewood PTA". She didn't say "by Ellen Meister" but oh my god, how insanely fantastic was it that she just happened to be a guest on Leno (to plug her own Emmy nominated DVD) the same day Ellen's book was released.

Can you say superstar? Cos' that's what Ellen is going to be.

I have more writing and other news but this post is already too long and I need to save something for later or tomorrow so...