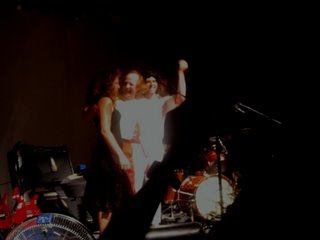 Is that the best picture of the Adrian Belew Power Trio or what? That's from their show in Philly Monday night and Gary took said photo. He gets the award for top family photographer now. And don't forget to click on all the pics in this post -- they will grow huge and clear before your very eyes. I know there's a joke in that comment somewhere but I'm too tired to think of it so use your imagination.

I'm still waiting for a report on last night's show from Julie and Eric -- it was a festival (The Acoustic Planet Tour) with Bela Fleck and Umphrey's McGee, but I did find a guy's live journal entry which said, in part:

"Wooo!
Just got back from Chastain Park Amphitheater where I got to see Bela Fleck & the Flecktones for the first time, and I geeked out listening to Bela and trying to figure out if Jeff Coffin was playing a penny whistle or a piccolo.

Opening for the Flecktones was Umphrey's McGee, a very good band, and opening for the evening was Adrian Belew. They all jammed in various combinations throughout the night, as well, including an awesome encore performance of the Beatles' "Come Together" which completely rocked my world..."

Oh.My.God. So you mean to tell me Julie and Eric participated with some of the best musicians in the universe last night and did a group kick ass jam of Come Together and I missed it? You do realize what a Beatle fan I am, right? The name of this blog comes from John Lennon's brilliant book of poetry, In His Own Write.

My Live Journal guy also included some pics, and here are two -- one of said group jam where you can clearly see J&E on stage, and one, which really made me bawl, of Julie reaching into the crowd and shaking hands from the stage (and Eric is on the far right - you can see him from behind wearing his John Bonham headband): 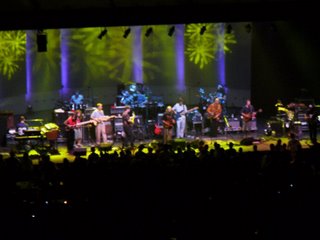 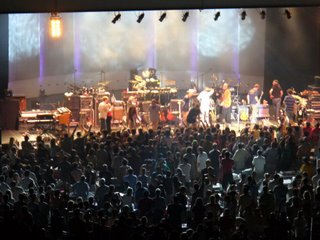 So this is a weirder birthday than most - the kids are on tour, I'm kicking around the house trying to decide what to pack for Florida and have pretty much decided fuck this, I am not checking in my bag, I will travel without liquids. This presents no problem to me at all except for my hair gel, which I cannot live without because I have a full head of tangled curly hair that I manage to keep barely under control with specially imported stuff from France.

But oh, do I really want to check my bag in just for hair gel? I think not. I guess I'll buy myself a cool hat for my birthday. Or wear a ponytail.

Ha ha - like you all really care about my hair.

It's been such an unbelievable couple of weeks, starting with the Belew show in New York last Tuesday night and continuing on with the show in Philly Monday and breakfast with the Belews the following morning that my birthday today is almost anticlimatic, except for the fact THAT I GET TO FLY TO FLORIDA AND SEE THEM PLAY TWO MORE SHOWS THIS WEEKEND!

Seriously. How cool is it that J&E bought me that as a birthday gift?

I also got this in my e-mail today:

"We at Pearl Jam Message Pit would like to wish you a Happy Birthday today!" which made me smile.

And thank you Myfanwy, Ellen, and Justin for your birthday greetings as well.

Finally, since it is my birthday, as a gift to myself and since I haven't done this in a while, a fun Neil Gaiman moment: 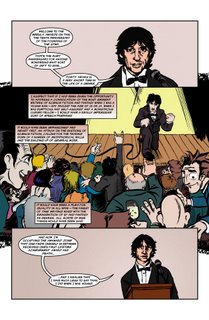 Ha ha - he may have less to say now than when he was young, but I sure as hell don't, and the minute I get some reviews, emails, etc. about the Belew show last night, I will be back to edit this blurb.

I'm also sitting on some writing news (plus, did you know Target is now carrying two books of mine? That deserves a separate post, I think. Yep, I'm right there among the sheets, towels, and cheap lightbulbs) but I'll address that next week when I get back from Florida and the east coast leg of the Belew tour ends.

Okay, I'm off to have some decadent cake for breakfast. I mean, really. What else should one do on one's birthday to start the day off decently? I mean, besides...

Later,
xo
Posted by RobinSlick at 8:30 AM