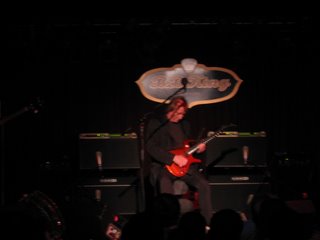 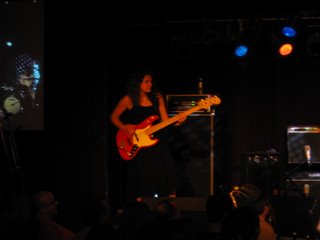 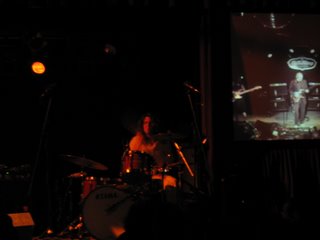 You know, I'm getting choked up just typing this.

How can I possible tell you about the magic that was the Adrian Belew Power Trio last night in New York City? From the opening notes of the first song, Writing on the Wall, I really had to struggle to keep it together. I was shaking, holding back tears...but the sheer genius of the music and the musicians and the obvious pure joy they were having on stage immediately got me out of weepy Mom persona and into full rock music afficienado mode.

This band is amazing. I'm not saying that because Julie and Eric are my offspring...the chemistry of this trio is freaking insane. Incredible is not strong enough a word. The crowd gave them two standing, screaming ovations...and BB Kings, on a hot summer Tuesday night in New York City, was almost completely sold out. I think there may have been some standing room only spots left by the bar, but it was PACKED. I had an incredible seat in the center of the venue and I was watching the audience reaction -- they were completely blown away.

Let's talk about some of the people in the audience who came up to me after the show and couldn't stop raving about Eric, Julie, and Adrian (who looked twenty years old up on stage last night).

I want to start by talking about the first man who walked over and almost caused me to have a seizure. John Hawken. When he introduced himself to me and then proceeded to tell me how much he enjoyed the show; how brilliant Julie and Eric were -- and he went on and on about them, about their technique, their stage presence, etc., it was hard for me to even take in what he was saying. The whole time my brain was saying John Hawken, John Hawken...I cannot believe I am talking to John Hawken.

Do you have any idea how many times I played that Renaissance album back in the seventies? Do you know I still have it on eight-track? Kings and Queens is one of the most brilliant songs...oh my god...I can't do this proper justice and besides, I'm crying right now. Holy cow. I hope I can finish this post.

Okay. Then, I met and continued to receive outrageously fantastic raves from Kevin March of Guided by Voices, Dave Dreiwitz of Ween, Jon Paris, Aaron Comess of the Spin Doctors, Saul Zonana, Project Object's André Cholmondeley and Robbie "Seahag" Mangano, Bill Saunders and his lady Nancy, and John Wilcox of Prog Sheets and also a talented comic book illustrator (the Elvira series, for one and who reads my blog and of course teased me about Neil Gaiman).

And I admit it, I was totally stoked to have an all access pass and eat backstage with Adrian and Martha Belew. Martha, by the way, is incredible. She's drop dead gorgeous, funny, smart, and does double duty as Adrian's manager. He's a very lucky man, but then again, she's a very lucky woman because Adrian is one of the sweetest, most non-pretentious rock stars I've ever met. Still reeling from the death of his long time engineer Ken Latchney, last night started out as bittersweet as it was the first show in ten years Adrian performed without Ken behind the soundboard.

Anyway, I can't wait for the show this coming Monday at World Cafe Live. Hey, have you bought your tickets yet? If not, click on that link! This show will make your freaking soul rise, and, -- as John Hawken remarked to me, it will restore your faith in music.

Oh my god, I still can't believe I had a conversation with John Hawken.

I guess you have to be a serious music fanatic, but there you have it. I'm going to be high for days between Adrian's genius and the show last night, the stellar compliments I received about Julie and Eric from the above mentioned luminaries, and well, hanging out backstage at BB Kings with Camp Belew.

I know John Wilcox among others are reviewing the show so as soon as they are written, I will post the links. I'm still way too excited/hungover (sleep deprived hungover, that is -- didn't get home til 2:00 a.m. and inexplicably woke up four hours later) to think straight.

So. More on the music later, more photos, reviews, etc. once I return to normal.

Ha. As if that'll ever happen.

Later,
xo
Posted by RobinSlick at 9:16 AM