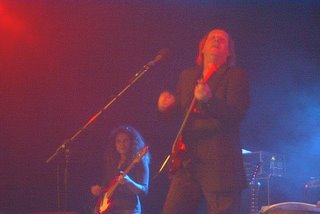 Julie Slick and Adrian Belew on stage in Springfield, Ohio

Okay, so I'm all alone here because the family has left for the European leg of the Adrian Belew Power Trio tour and I'm getting through it by pulling a writing marathon -- I made a firm commitment yesterday to send a finished, edited version of Baby Boomer out by the end of the month and I'm actually very calm about it because I work best under pressure and with no one home, I can really lose myself in the writing. There's nothing quite like that for me -- it's such a natural high. I'll start at 5:00 a.m. and the next thing I know it's dark outside and I look at the clock and somehow an entire day has passed. I know I must have taken bathroom breaks or grabbed a handful of raisins somewhere along the line but mainly I am shocked how fast the hours pass when I'm working on something I truly love.

Anyway, one final writing note -- I was solicited by a brand new magazine which looks absolutely awesome. It's called Greatest Uncommon Denominator, it will be published twice a year, has a more than interesting "we pay our writers" policy for its contributors, and it's got 200 pages of content. So I wrote back and told them I didn't have any new short fiction at the moment but I asked if I could do an interview or review (or both) and they took me up on my offer so guess what -- I get to do a review of Neil Gaiman's Fragile Things when it's released and I told them I'd also interview the Adrian Belew Power Trio. They wrote me back totally stoked! Of course it's going to be hard to be objective...

So in celebration of that, this is for Susan Henderson, who just got back from Africa and I'm hoping this will lure her to my comments section and she can share at least one story from her trip: 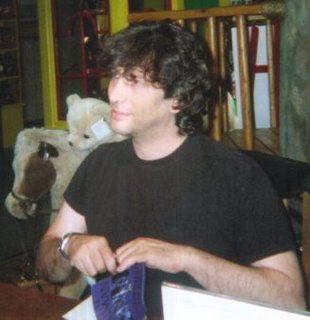 I know, Sue, I know. He's so beautiful it hurts.

And speaking of Adrian Belew...

Take a look at his updated website. I almost had a coronary when I saw that yesterday. Cool, huh?

And Eric updated his blog, which can be found right here on the front page of the Philadelphia Inquirer on line.

As I mentioned yesterday, I got some more great reviews on the Belew shows and the following is by Rena Fay, who also took the photo posted above:

WOW!! The shows were stellar!! Adrian, Julie and Eric really had a great time!

Highly anticipating the shows, I took my 'tour set' disc on the trip with me and listened to it repeatedly on the drive up to Indy. I was so ready!

It was a beautiful day, as the humidity was low after the downpour of rain they had on the 4th of July -- just what this California native needed. Hey, it's too freakin' hot with that humidity. I don't know how they do it. I arrived in Indy, realized that I had no idea where the show actually was, so I made my way off on Market Street and followed it downtown to a beautiful flowing fountain - a monument of some sort. I'm forced onto a one-way street heading north and about 10 blocks up, I cross 10th Street, so I know I'm in route, with only 80 blocks to go! Arriving at the venue, I sit outside for a few on the phone. Meanwhile, a car with a couple of guys inside pulls up, only to bump into the front of the rental car. Yes, of course I had declined the insurance. I always decline the insurance!

I go inside where my idea of standing in front of Adrian is immediately crushed. There are fold-up chairs, about 300 of them in rows, starting a good 4 feet back from the stage. The room is a large black box with a very high ceiling and right away I see j.sewell and his lady setting up to video (hi you two.) After saying hello, I take a seat in the 1st row and within a minute The Residents start playing, making this kid feel right at home (thanks Ken!) Scoping out the stage, I decide to make my way to the other side of the room, closer to Adrian seat. It was hard to sit in my seat. I was so anxious that I could hardly sit still.

The Belew Power Trio take the stage and open with Writing on the Wall. Adrian was very proud of his new team and it really showed. As soon as the song ended, an admiring audience member commented on "the beautiful bass player" causing Julie to smile and blush for the first of several times. Next came Dinosaur with a different arrangement for the drums, much faster than usual. Let me stop here for a second and say to Robin -- OMG! I don't want to sound repetious, but your kids can ROCK! Eric is one of the fastest drummers I've seen. His drumming on & was my favorite. The part that comes after the double beat was amazingly fast. His bass kicks were out of league with anything else. Wow! And Julie's playing is so smooth! She makes it look like it's the easiest thing. Her fingers just float across her bass strings! After the first couple songs, Adrian, like a proud papa, introduced them to us, and the whole place rose to a standing ovation! He is truly proud to have them on the tour! And again, the admiring audience member makes another comment on Julie's beauty and abilities...much to her embarrassment. The show continued with Young Lion, Beat Box and Matchless Man and Adrian comments on the enthusiasm of the crowd and gives thanks to the crowd for making a Thursday night in Indy most memorable. The place really loved it! The killer set continued with a very Dark Shadow-y version of Madness then Julie and Eric left the stage. Adrian took a seat to play Drive mixed with Within You Without You then Lone Rhino, turning it into a sing-along with the audience!!! Julie and Eric returned and played another long set including I Remember How To Forget, where Adrian, towards the end,looked over toward Eric and while laughing said, "I almost did forgot the ending." (It sounded just perfect to me.)

The first encore -- Frame by Frame / Three of A Perfect Pair was awesome. It sounded quite different than KC or other solo Adrian I've heard. They returned to a final encore of Elephant Talk and Thela, where by this time I was dancin' with some chick on the side of the room away from the fold-up chairs. We had a blast!

Adrian had a line for signatures about 50 deep. Eric and Julie were surrounded by people asking for autographs as well (yeah Robin, look for picture of that to come your way soon.) They were very cool to talk to and they told me, I think it was Eric, that they love their mommy very much! :-) I gave away stickers and talked to Adrian and friends for quite a while before driving back for some much needed sleep. I was happy that Martha was there! :)

Encore 1:
Frame By Frame
Three of A Perfect Pair

*****
Hey, thanks for that, Rena. That was awesome of you to send me and I'll be posting more of your photos in the future.

Anyway, I'm incredibly bummed that there will be no webcast from Zappanale this year but I guess it's just as well -- I need to finish editing my book.

And that's what I'm off to do now.

Later,
xo
Posted by RobinSlick at 8:14 AM