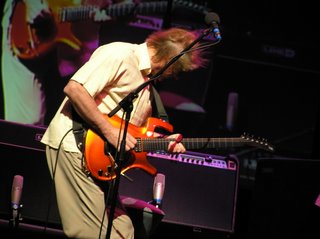 Man, I have a lot to talk about today. Go get a cup of coffee or tea or something and come back.

Just kidding. But it might not be a bad idea.

So first things first. Eric is blogging about the Adrian Belew Power Trio tour for the Philadelphia Inquirer and here's the link. After today, you will be able to access Eric's blog by simply going to www.phillynews.com but of course I'll put a permanent link up on the right hand side here and remind you constantly (ha) when that happens. I know he's my son, but I really like the way Eric writes. Hey, that could be his back-up plan if he doesn't make it as a musician.

Second, I've been reading/receiving some incredible reviews of the Chicago shows.

Andrew Hester had this to say:

"I was there, and it was an excellent show. The Crimson tunes rocked harder with his new trio than they had previously on last year's tour, with more standard arrangements in use similar to the original album cuts. For example, he did not do that unusual rearrangement of Frame By Frame he was doing last year. Also, there were fewer musical and technical issues in general. Adrian really seemed to stretch out and and just jam a bit more than in the past with some extended soloing on his part. He seemed to be having a lot of fun, and so did the rest of us in the room!

The new rhythm section, Julie & Eric Slick, were very tight, and they both displayed some impressive technique and taste to excellently complement Adrian's spastic alien at the zoo nuttiness.

The bass was more classic bottom end and in the pocket then we had grown used to with Mike Gallaher and his jazz guitar chops and octave pedal. This resulted in a more cohesive and solid performance overall. Less overtly flashy & cluttered, Julie's tasty & tasteful improvised fills added quite a few nice surprises at several unexpected moments. Excellent stuff!

The drumming was equally impressive, and, at times, explosive. Eric seemed to add a bit of intensity and urgency to the music that brought a certain youthful freshness to some very familar music to my ears.

Close to the end of the show, at some point, Adrian mentioned how he'd like to hold on to his new bandmates for a while (I can't remember his exact words). I hope he does."

Wow. Thanks for that awesome review, Andrew. And yeah, I hope he holds on to his new bandmates, too. xo
*****

Over on the Planet Crimson forum board, here's what they're saying about Chicago:

Posted: Sun Jul 09, 2006 1:05 pm
"Great show. Adrian was at his playful best, and the Slick (sp?) siblings were right with him. The bassist was very good, but she really let her hair down only during the encores ("Elephant Talk" and "Thela"), where she managed to play all those Levin stick parts on a standard bass guitar. I really really really liked the drumming, though; Eric worked extremely hard during the night, but always kept it dynamic and stayed far away from sounding mechanical, all while throwing slightly exhausted smiles and grins towards his sister and Adrian. Ade himself amazed, especially since this was the first time I saw him without KC. With all his gadgets, he's a one-man band himself and played two songs ("Lone Rhinoceros" and another one I couldn't name) solo, looping rhythm guitar parts and soloing over them; no need for bass and drums there, then. Smile Don't ask me about a set-list, though, since I only know the Side One stuff and random other pieces that stuck in my mind...

Overall, lots of smiles were thrown across the stage tonight, which for me is a good sign of a band having fun together. As a power trio, they've got enough power to do a few albums, and I do hope Adrian is going to ask them to participate in studio projects once this tour is done..."
*****
Posted: Mon Jul 10, 2006 2:23 am
"I agree with Nadim on all points: Adrian was absolutely smoking throughout; by the end he was soaked in his sweat. I really need to check out Side 2 (thanks for direction L.Ray) and probably go to 3 and 1 from there. Some of the best solo-Belew I've heard.

Last two songs of the set: Frame by Frame and Three of a Perfect Pair.

"What Nadim and Michael said - A great show...

I believe this show was a few notches above last year’s show at Park West with the Mikes. This was only the third show for this line-up. The two Slick siblings add great energy, solidness, and playfulness to Adrian’s show. Eric’s drumming is solid, playing on a 4 piece set with double bass pedal on a few songs (like “&”). Julie’s bass playing was great and I too was amazed at her playing of the stick parts from ET and Thela on a 4 string.

The set list was similar to last year’s show. “Dinosaur” was done without the cool middle section (but we get a taste of that at the end of “I Remember…”). I was glad to hear “Beat Box Guitar” as it had been stuck in my head all day as Jason and I made our way around Chicago. “Drive and Matchless Man” were played solo with looped rhythm parts. “Madness” surprised me again as it did last year. The recording is always difficult for me to sit through some times but the live version just blows me away everytime. Julie and Eric really laid out a funky base for Adrian to get crazy over. The last four Crimson songs were played amazingly. I couldn’t decide who to keep my eyes on, Eric for seeing how he adapted Bruford’s parts, Julie for how she took on Tony’s parts or Adrian for how he played his and Fripp’s parts..."
*****
Okay, I'm happy now. Man, this is intense, reading all this about J&E. I admit it, I'm getting the chills.
*****
On the Primus forum board:

"Amazing. I never heard the Double Door roar so much after each song and you can tell the 2 School of rock kids were having a blast playing w/ Adrian and Adrian having even a better time playing w/ them.

And Julie Slick, the bassist was hot.....and very much talented"

"Julie Slick on bass is a goddess and rips on bass and her brother Eric on drums needs to join a speed metal band as his double bass and insane cymbol work would fit in perfectly.

All of Adrians songs had a really heavy fast feeling to them w/ them backing. Total amazment."

"Julie and Eric Slick were much better than Les and Danny on all the L.A.D. tunes"

"I'm telling ya the show was fuckin phenomenal the other nite."
*****
Continuing on, here's what Clint had to say in his blog:

...Then Adrian came on stage with his new Power Trio - backed by the Slicks, Julie and Eric. On the second song, "Dinosaur", the crowd really started getting into the music. I, however, had a brief moment of deja vu. In 2001 at the Chicago Theater, King Crimson played. On the second song, Adrian Belew lost his voice. The rest of the 2 hour set was totally instrumental. The second song was, you guessed it, "Dinosaur". However, his voice stayed firm and he brought the house down with several tracks from his recent three albums, several Crimson songs - including a thank you to Andreas Kapsalis by playing "Frame by Frame", and even a couple of the "classic" Belew tracks from "Op Zop Do Wah". I have to say that I was very impressed with his bassist and drummer. Despite their age - 20 and 19, respectively - they had great poise and commanded the audience's attention during their solo portions of various KC songs (songs written with very specific musicians in mind - Tony Levin, for instance).

What really wrapped up the performance for me was the energy and pure joy that came off the stage during the performance. Adrian Belew is a man who loves what he does and there is no mistaking it. The audience couldn't help but be wrapped up in the music and whisked away for 90 minutes. He wasn't there to converse with the audience, he was there to perform his craft (even said early in the show "You know how much I like being here, so let's get on with the music.").

I left the venue with a signed copy of "Side One". Definitely one of those more memorable experiences."
*****
Finally, my good pal Andrew Greenaway, a/k/a the Idiot Bastard, has a photo and some cool links up on his website including some new press releases for the Zappanale festival in Bad Doberan, East Germany later this week, which of course Adrian and J&E are headlining.

So did I mention how happy I am?