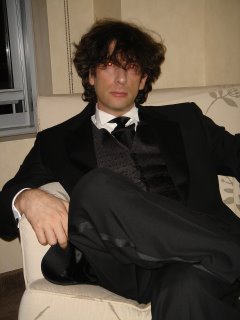 "You didn't mention that he was a complete and utter pain in the arse, though."

Ha ha - hardly. So I will spare you all the gory details of the last few days and focus on the way cool stuff instead. A couple of days ago when I blogged the whole sad story of my infected tooth, I was completely freaked out to receive an e-mail from Neil Gaiman Himself along with this..ahem...previously unpublished devil-eyed photo as bribery to get to a hospital or at least let him know that I was on the mend. Right. Like I would ever say no to Neil.

(And I finally learned the secret of uploading a photo to blogger so that when you click on it, the photo goes full size so if you want to really swoon, click away...)

Actually, dire pain and fear of death led me back to bed and conferring with the dentist again after which I am now happy to report that I am home and the infection and fever are gone from my body...just not the area of the tooth itself which alas must be extracted on Tuesday at 1:00 p.m. Root canal is no longer an option because I was such an idiot but okay, I admit it, I'm relieved about that. Then woo hoo, I get to spend another week or two on antibiotics recovering. Luckily, it's the back tooth so my perfect beauty will not be ruined. Oh god. That's the pain pills talking, trust me. Anyway, I should (but won't) post a photo of the new, improved skinny me as a result of not being able to eat solid food for a week...right now I am sitting here in bed wearing a pair of size ten jeans "just because" even though I'd be way more comfortable in pajamas.

So speaking of Neil Gaiman and how cool he is, I recently read an interview in which he was asked "What is your greatest achievement?" and he replied "My children."

No wonder his fans love him the way they do. And of course my answer would have been exactly the same.

Because really, the true silver lining of this tooth debacle and being bedridden at home is that Julie and Eric have been rehearsing non-stop for the up-coming Adrian Belew tour and I am their ecstatic audience. They've got the CD from their rehearsals with him down in Nashville last month (which I totally confess to downloading on my iPod and have been listening to whenever they aren't rehearsing) and they've been playing along. First of all, what a freaking awesome set list. It spans Adrian's career. Secondly, I am just blown away by my kids' talent. I've been turning off all sound in my room and opening the door so I can hear every note and it's like I'm living in some kind of wonderful musical fantasy world. Yep, I admit it -- I am the luckiest woman in the universe right now, wonky tooth and all.

I'm plotting and planning to see if I can make their show in Amsterdam in July. I've never been there and well, you know, I'm a natural for that place. They're also playing in Italy but that date isn't confirmed yet so I can't schedule a flight but I understand the Amsterdam and Italy dates are a few days apart so it would be amazing if I could attend both. But if I can't manage it, there's always the midwest U.S. shows in early July and of course the east coast swing in August -- I'll post the entire tour schedule as soon as it's complete but there's a partial up on Pollstar.

And finally, if you don't understand the heading of this post or the subsequent quote beneath, do yourself a HUGE favor and treat yourself to Mr. Gaiman's Anansi Boys. Hey, I'll even provide you with the Amazon link. You will not be sorry - it was my one of my favorite books of 2005 and I was fortunate enough to have read it while traveling through England by train last October which was the coolest thing ever. I was reading one particular chapter while on the train to Newcastle and I looked up and saw the most beautiful double rainbow. And then in January when Neil was in Philadelphia, I got the book autographed and got to meet him and oh god...

Okay, enough. It's all in good fun.

Meanwhile, this you can't believe but knowing me, you probably will. While I was in the middle of writing this post last night and was about three-quarters of the way finished, I received a second e-mail from Neil because I'd written back to him and asked if it was okay to post the above pic he sent me on my blog and obviously he said okay. Sigh...what a guy. He really does have a generous heart. Anyway, I use AOL mail so I heard "You've Got Mail" as I was writing this. When I saw who it was from, I got so excited that I closed my Firefox browser so I could read it instead of merely minimizing the screen. Unfortunately, Firefox was what I was using to type this entry and I lost the entire post. I just stared at the screen numbly in disbelief because in almost two years of blogging that's the very first time that's ever happened to me. I tried the "recover post" thing but because I'd closed the browswer altogether without saving anything I wrote, there was nothing to recover.

Anyway, I did the best I could this morning to try and reconstruct what I wrote last evening but damn it, I know I'm missing some of my best material. Have I mentioned what a dork I am?

Later,
xo
Posted by RobinSlick at 6:00 AM