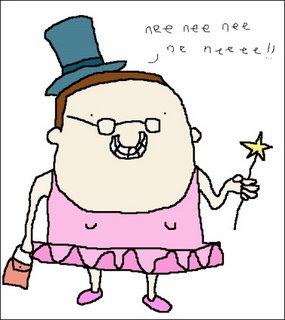 Yeah, so the evil tooth fairy took my tooth yesterday and when I felt under my pillow this morning, nothing. All he left me with is a swollen face (again) and an insatiable hunger. I'm allowed nothing but pudding or yoghurt today and woo hoo, tomorrow I get to have warm soft food like a bowl of noodles or oatmeal. Wait, I see I'm allowed a can of fruit cocktail. Huh? When were these instructions written, in 1950?

However, the evil tooth fairy's agent --my oral surgeon -- did give me a prescription for Codeine so that tells you what kind of pain was involved. Now here's something you would have thought I'd have learned by now: Never read the paperwork that comes with your prescription or you will make yourself nuts...or, in my case, even more nuts.

"Codeine can cause drowsiness or hyperactivity".

Okay. Which is it, then? Even in my worst (and much younger) partying days, I only indulged in things of a hyperactive nature for a brief time. A few episodes of my heart skipping a beat and imagined trips to the emergency room where I'd be instantly arrested was enough for me.

Now those drowsy drugs...mmm...but I suffer from insomnia and natural hyperactivity so that's why they used to appeal to me but these days a glass of good wine with dinner is all I really need.

Sorry. I'm really, really hungry. And I just had to drink a cup of cold coffee because as I said, I'm not allowed anything warm until tomorrow and I'm not willing to have the headache from hell because of no caffeine.

Note to self: Break the coffee addiction once and for all when this is over. Go back to tea. Tea is the new coffee, anyway. I know this is true because In Style Magazine told me so in the oral surgeon's office yesterday.

And what a character my oral surgeon was -- first time I'd ever met him and initially I thought he was kind of scary and then my imagination really took over because what kind of person picks that as his/her career? Day after day of blood and spit flying and people screaming in agony, or, in my case, having a full-fledged panic attack while in the chair.

As I sat there trying to absorb all of the information he was throwing me about the tooth, what to expect and having me sign all of those dreaded release papers about jaw deformities and strokes, I had a brief moment of clarity and said to myself "Well, an oral surgeon is nowhere near as bad as a person who decides to be a proctologist" and I calmed myself down.

And then I saw the velcro arm restraints on either side of my chair and frankly, I started to lose it because the surgeon told me he didn't feel it was necessary to put me under, he could probably do it in fifteen minutes with a local...but it would take that long because he fully expected the tooth to break.

And then he started to sing.

"Oh here comes a little pinch in the cheek la la la and open wide la la la another little one and now a big one LA LA LA on the roof of the mouth doobie doobie doo..."

Okay, like, I never received that much novacaine in my life and then he walked out of the room with the dreaded Terminator line "I'll be back".

One second alone and I realized I couldn't swallow. I was so numb I couldn't feel my tongue or back of my throat and I started gasping for air.

"The stroke...the jaw deformity...Rob...get a grip...deep breaths...you aren't going to choke to death in this dentist's chair anymore than you were going to choke from peanut butter asphyxiation in your Neil Gaiman dream."

So I somehow forced my brain back into a happy place thinking of that (ha) and in walked the singing dentist again, this time wheeling in an evil cart of sharp instruments.

"Gurgle gurgle," I replied and damn it, this really was like my dream of the other night except it was real and what, now I think I'm psychic? Oy.

To be honest, I couldn't feel any pain but then he starts with the singing again "La la la I'm pulling out your tooth bibbity bop bop bop" and I swear, he lifted me three inches off the chair as he yanked.

That's when I had the panic attack.

Well, I tried, but I was speaking in tongue and he kept on singing and pulling and then out came the tooth and he showed it to me in all its gory glory. Oh my god. Eww!

"Ice on your face as soon as you get home, Advil, Codeine, nothing but pudding/yoghurt for 36 hours blah blah blah..."

Got home, did as he said, but as soon as that novacaine wore off, I started howling.

I took the damn Codeine even though it was 50-50 I'd have the preferred reaction.

You know I'm not that lucky.

Midnight I was still up with my heart pounding in my ears and now I was really screwed because I couldn't have a glass of wine because it said in huge letters on my prescription bottle DO NOT TAKE WITH ALCOHOL.

Now. I suppose I could have gone by my initial reaction while in dire pain, which was "Oh, this means you need to swallow it with water, not wine, but you can have wine in a few minutes" but I am not a complete idiot so I sat here all night alone with an icebag on my face surfing the net. Half of my family wasn't home and the other half was upstairs snoring but after a while I passed out and this is how they found me this morning: 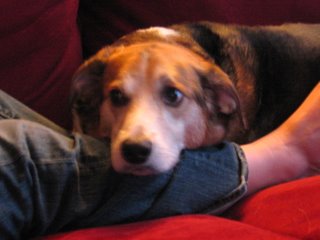 Yeah, so now we know who really cares about me in this family.

Just kidding. Eric was awesome. Because he was the only one in the family available yesterday, he was the one stuck accompanying me to the great tooth extraction of 2006 and he did a great job of calming me down the whole way home in the cab where I was convinced that underneath the gauze I was chomping on, I was probably hemoraging to death.

Anyway, I have more music and writing news but I seriously need to find something soft and cool to eat so... (Ha ha - I know what you are all thinking -- wash out your brains with soap right now!)

Later,
xo
Posted by RobinSlick at 8:52 AM