This Saturday, June 9, 2018, it's NATALIE PRASS ON CBS THIS MORNING 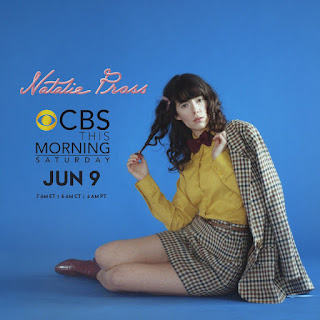 Yep,Natalie Prass, my pick for best record by a singer/songwriter in 2018, will be performing on CBS This Morning on Saturday - I believe the music part of the program is in the last half hour of the show, or in the 8:30 a.m. portion, but just to be safe, I am up at dawn anway and will be watching from the onset at 7:00 a.m.  If she comes on earlier, I'll tweet it out.

This is exciting stuff.

Also, I would be remiss if I did not tell you that daughter, Julie, is currently gigging with Adrian Belew at the Iridium in New York City.  Their first show was last night, and tonight's will be live streamed!!!!  Here's the link:  http://theiridium.com/live/index.html.  She's got four shows total, with the finale on Saturday night, and Gary and I are driving to New York to see the show and bring her home for a bit before she takes off for Spain again.  Actually, she has another gig with Adrian at the end of June - don't know if I can spill the details yet so I'll stay quiet.  For now.

Eric is on tour with Dr. Dog right now - tonight he has a show in Oakland, CA and tomorrow he's in Portland, OR, that lucky dude.  All I know is, I can't wait for the Dr. Dog gig at Festival Pier in Philadelphia on June 23.  Their new record is hot!

Speaking of new records, I heard a  new cut yesterday from Buddy Guy which features Jeff Beck and Keith Richards.  Do you think I was blown away just a little bit?  Ha!  Here - have a listen and you decide how freaking good this is:

So yeah, music is how I'm getting through the grotesque Trump era.  But then again, music is how I get through everything.  That, and some good vegetarian fare.  I can't believe how Gary has adapted - he became a five star vegetarian/vegan chef.  I'm laughing because I remember how scared I was to tell him, after coming off a five week tour with the kids in 2009 when Eric still played in the Adrian Belew Power Trio, that I had decided to join Julie and Eric, who were already vegetarians for a few years, and had spent the last five weeks meat free.  I think at the time, Gary just rolled his eyes and probably thought, "There goes my wife again with one of her madcap schemes....this will probably only last a week or two...I'll just humor her for now."  So not only did just the opposite happen, but Gary, who was a lifetime carnivore, has slowly joined our team over the past few years.  He eats vegetarian every evening, and his only dive into meat world is a boneless chicken breast he cuts into a salad he makes himself for lunch a couple of times a week.  The vegetable meals that man has invented for me over the past several years should be in a cookbook and hmm...I think I'm gonna do it. Stay tuned.   But man, the benefits of eating this way - I haven't been above a size eight in seven years, Gary looks like he's 45 years old, and unlike most people our age, we don't have any aches and pains or major disorders.  KNOCK WOOD.

I just giggled to myself, guessing that there are no vegetarian Trump supporters.  They all look like they secrete pig juice.  Sorry for that, I'm tired of being nice.  Every time I say something against (not my) President Imbecile, one of his supporters comes back and says something to me like, "You're ugly and a c*nt."  I never attack them, I just attack their boy.  But, my gloves are off now.  And I see I've already made a mistake.  I should have said, one of them says something to me like, "Your ugly and a c*nt."   :)

And on that note, I'm outta here for now.

xo
Posted by RobinSlick at 8:41 AM