It was twenty-five years ago today...

Hello, blog, remember me? No? Okay, then. I can see I have to refresh your memory and oh, man, do I have a lot to tell you.

Let's start with the latest news and then I'll backtrack to my last post of...gasp...November 4, 2010? How is that possible? To quote Dr. Dog: Where'd All the Time Go?

Speaking of that, Happy 25th Birthday to Ms. Julie Slick. Man, I am in shock over that one. In case you haven't been with me since the beginning here, I told the whole tragi-comedy of Julie's birth in one of my earlier posts. Yep, still crazy after all these years. :) Wow, I just checked her Facebook page. She must have 5,000 Happy Birthday wishes from people literally all over the world. If you haven't friended Julie on Facebook, what are you waiting for? By the way, Julie shares a birthday with both Andrew Greenaway, ak/a The Idiot Bastard and Andy Lucibello, the man behind Pink Revolver. 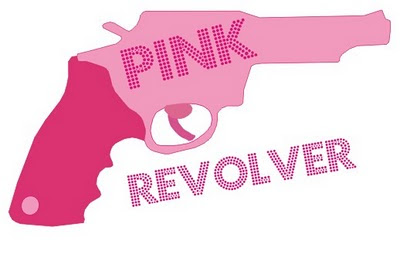 Okay, that's not really their logo, I found it in Google Images, but yep, they're a band.

Who's in it? Well, here's the guitarist: 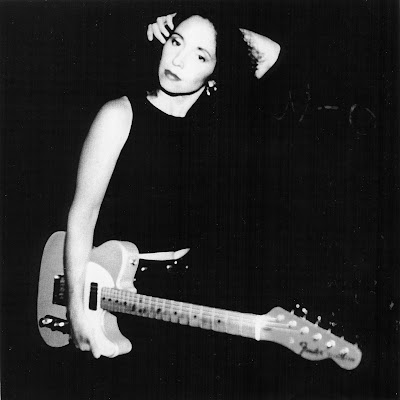 And that would be Jane Getter. Yeah, you read right. She played guitar in the SNL band. SNL. As in Saturday Night Live. 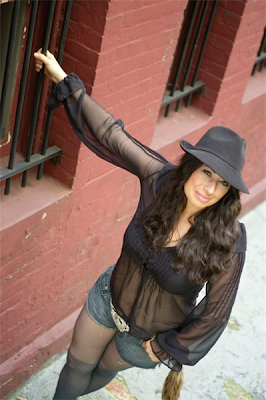 That would be Rachel Z. Ho hum, she plays with Peter Gabriel, Wayne Shorter, won a Grammy... 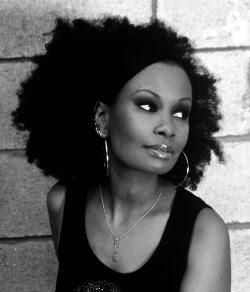 Joining them will be the world's most insanely talented electric violinist: 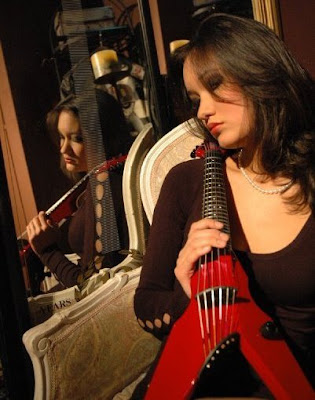 You may recognize her. She was a student along with Julie and Eric at the School of Rock and her name is Katie Jacoby. She's all grown up now, that's for sure, and she's performed with the Trans-Siberian Orchestra, Jon Anderson of YES, John Wetton of King Crimson/Asia, Ian Anderson of Jethro Tull, Zappa alumni Ike Willis, Ray White, Ed Mann, and Napoleon Murphy Brock, Steely Dan and Doobie Brothers' Jeff Skunk Baxter, Vernon Reid of Living Colour, Exodus, and Ed Palmermo's Big Band. 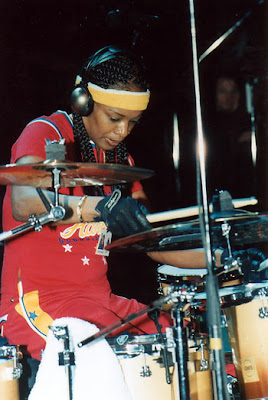 I wonder who the bassist is? 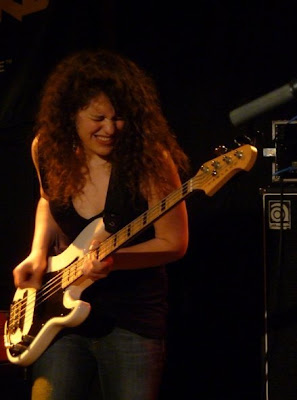 Why, yes. That would be daughter Julie Slick

And Andy Lucibello, a brilliant musician in his own right and yes, the very same Andy who shares a birthday with Ms. Julie, was kind enough to be the facilitator of the band and their first gig is as follows:

SCHOOL OF ROCK Presents: Concert for the Awareness of Women in the Arts and Breast Cancer
March 12, 2011 from 7PM to 10PM featuring the debut of PINK REVOLVER
Opening acts will be all female bands from the Chatham, Princeton, and Long Valley Schools of Rock.

I'll have additional details and of course lots more to say on this band/concert in the coming weeks, but oh my goodness, if you are anywhere near the north Jersey/New York area, you do not want to miss this show.

And this is just the beginning for Pink Revolver. They're insanely talented, gorgeous...what else do you need?

Julie is busy recording her new CD, and last night when she came over here to celebrate her birthday a little more, she played some new cuts for me and talked about the "special guests" she's going to invite to join her. Erm...I can't blab, but how can she top the special guests on her debut CD? Well, stay tuned. She just might.

On Thursday evening, we had our usual bon voyage Eric Slick dinner at Silk City - Eric is currently on tour and just played two sold out shows in Washington, D.C. - he's heading to Knoxville today for a show tomorrow -- combined with yet another Julie birthday celebration. Oh, before I give you more Julie news, here's the poster for the current Dr. Dog tour. Cool, isn't it? 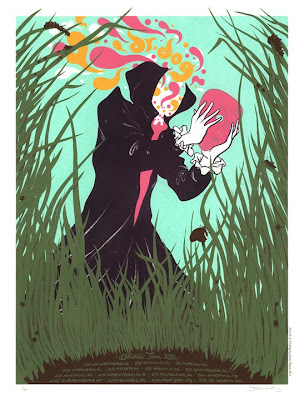 Here's the remaining Dr. Dog tour schedule. Be advised that the February 11, 2011 show at Philadelphia Electric Factory is SOLD OUT! However, if you really want to see them, if you believe this, private brokers are selling single tickets at $250@! I would say that Dr. Dog has "arrived", wouldn't you?

While I'm still on the subject of Eric, how about some family photos?

Below is a slideshow of our family Thanksgiving, which was held on December 10, because Julie was on tour with Adrian in Sweden on the real date. It was so cool to have everyone here - Eric and his beautiful significant other, Nicky and Julie and her significant other, Matt...and by the way, Matt and his band have a new CD out which is truly wonderful and on heavy rotation on the radio. You can check in out right here.

The same gang got together at Christmas...here's a couple of Nicky's photos at our house on Christmas morning: 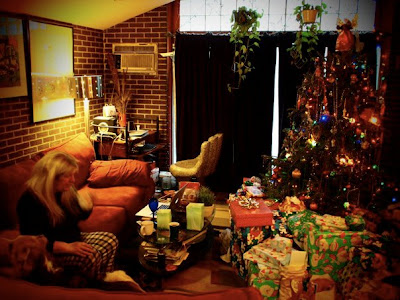 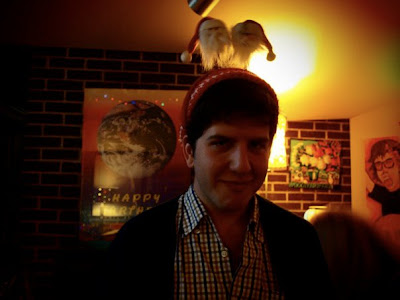 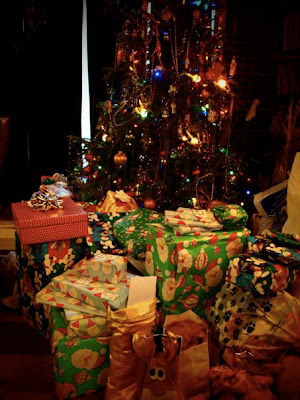 Yeah, there were a lot of gifts and yeah I am in my pajamas and not looking so swift but it was early in the morning!

Okay, back to wrapping up my Julie news.

So yeah, she's working on the new CD, and you can hear the work in progress over at Sound Cloud.

What's really cool is that Julie's debut CD made several "Best of 2010" lists...not bad for a one woman show who does not have a record label or distributor. In fact, she's blowing everyone's mind, well into her second pressing with sales still brisk. Hear that, Bob Lefsetz?

Here are links to some sites which gave Julie the best of honors:

Vince Font over at Progopolis has this to say...and you can listen to the podcast right here...

Sea of Tranquility showed her some love...

So did Progressive Ears!

And the one that probably made Julie the most proud...coming from brilliant bassist Steve Lawson, who saw the trio in London this past fall and was blown away if one is to believe his many tweets on the subject...and I do! :)

And if that's not awesome enough, stay tuned for details on something incredible altogether - Julie sold a song from the CD! We don't know yet if it's going to be used for a television commercial or what, but she sold it for a significant amount and too funny, out of all the songs on the CD, they chose the one that's a duo with Eric: February.

Which reminds me. The ONLY real radio station in Philadelphia, WXPN, named Dr. Dog's Shame, Shame as #3 album of the year and their song, Shadow People, as #3 single. While Eric was not with the band when they recorded Shame, Shame, he was with them this summer when they recorded Take Me Into Town, which was voted #25 best single! And their song Black/Red, which you can also access by clicking the first link, has been picked up by not one but two television shows!

And since I saw it tweeted everywhere, I assume it's okay to tell you that Dr. Dog has already started work on their next studio album, and it's being produced by this guy. Yes, I know. Heart be still. I heard some of the rough tracks and got some serious chills.

Let's see. What else. Man, I have a ton of writing news. I want to tell you all about my new publisher but I am awaiting my book's new cover and I don't want that news to be buried here, so I will be back with a separate post which focuses on writing and my writer pals. I have friends of note with blockbuster books either just released or about to be released, and there are two in particular I can't recommend enough. One is Caroline Leavitt's latest, which is called "Pictures of You", and another is Ellen Meister's "The Other Life". Please friend these amazing authors on Facebook. They are sweethearts, they interact with their fans, and most of all, they are brilliant writers. Caroline is getting unbelievable rave reviews and is out on a book tour right now ("the beaded vintage sweater and red cowboy boot tour har har...Caroline is my twin sister from a different mother...she wears all black, too and has long curly hair) and Ellen...man, what can I say about Ellen...how about watch this space for some even more amazing news!

Again, more on writing and the book reviews I promised you months ago -- Ariel Leve's "It Could Be Worse You Could Be Me", Marcy Dermansky's "Bad Marie", and Gina Frangello's "Slut Lullabies" among others -- will be forthcoming. One of the reasons I haven't blogged and really shirked my responsibilities and promises to these authors is that *gasp* I took a "real job" this fall filling in for someone on maternity leave at a local law school. I finished up at the end of the year and have been grappling with some home typing in the meantime while I write my latest book and also look for another job. I loved working at the law school (in fact, so much that it freaks me out that it's over because the people there were so intelligent and so cool it was ridiculous) and decided that when I do go back to work, it will be at a university again. I love being with students and in an academic atmosphere...you know me, I'm Peter Pan...I don't have to explain that to you, do I?

Ha ha, I thought not.

Okay, I started this post at 6:30 a.m. and it's now 10:45. Four hours on a blog post? Ha! And I haven't even told you half the stuff that's happened or about to happen. But my brains feel fried; I need to put up another pot of coffee, and you know the drill...if I think of anything I forgot that I simply must add or if I come across any reviews of this weekends' sold-out Dr. Dog shows...I WILL BE BACK (said in best Arnold Schwarzenegger voice).

Email ThisBlogThis!Share to TwitterShare to FacebookShare to Pinterest
Labels: It was 25 years ago today
Newer Posts Older Posts Home
Subscribe to: Posts (Atom)