So if you live vicariously through Julie and Eric Slick like I do or are simply normal people and just friends/fans, you've probably already seen this very cool video from their New York City debut at the Cake Shop of their band with Robbie "Seahag" Mangano, a/k/a Paper Cat, but you know as President of their fan club, I have to post it here, too.

Yeah, that rocked. And more is on the horizon...stay tuned.

It's nice to have Eric home a couple of days, at least in theory -- he's swamped with rehearsals, other projects, and whatever this might be:

And just another reminder that Julie has a jazz gig this Friday night at Ortlieb's Jazzhaus in Philadelphia with Calvin Weston ...details over at jambase.

Next week is going to be crazy altogether with the release of the new Dr. Dog album. The band has all kinds of press, radio, Late Night with Jimmy Fallon, and some other really cool stuff TBA lined up, and then they leave for tour and I won't see Eric again until a brief couple of days in mid-May...then he takes off for Berlin, Paris, London, Amsterdam, Barcelona...what a freaking life!

Hey, you can listen to the entire album prior to its April 6 release, over at NPR. Brilliant! Here's the link.

And next week will also be awesome for me. I am assuming I'm getting a guest pass to the Fallon show...man, I hope so...I haven't had a good chance to embarrass myself publicly in ages and I'm running out of stories. We can't have that! At the end of the week, I take off for the wilds of Canada for a weekend writing retreat with, as I mentioned before, three of the best women writers in North America. I'd tell you who they are but I'll wait to get their permission and will report back with a blog post after it happens.

Hey, thanks to everyone who purchased my latest book, Bitten to the Core, over at Fictionwise this weekend. I had to take a screenshot of this, because I doubt it will last very long, but my book is currently the highest rated in its genre! 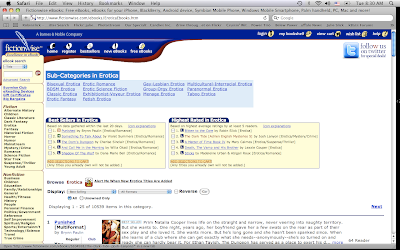 Sadly, the book is no longer at a reduced price unless you sign up as a Fictionwise club member (an excellent idea, actually) but you can preferrably buy it directly from my publisher right here in both paperback and e-book format.

Erm, if you did buy the book from Fictionwise over the weekend, please don't forget to rate it. I admit it- I like watching that blue tower of "Great!" grow taller.

Oh, this just in: My publisher now has a free iPhone app - grab it here!

I am going to be doing a reading of sorts in late April - more on that in a future post. When I say "of sorts", it means I'm not going to read directly from one of my books or stories, I'm going to relate the material like a stand-up comic at a very informal competition...but if I manage to win, it will be on You Tube so in a perfect world, you'll get to see the results. Unless I get someone to film it anyway, but whenever I make those kind of plans, they either fall through or I hate looking at/listening to myself so much I can't bring myself to post the video. Because really, I am always both startled and horrified at the woman on film. I'm nineteen years old and sexy gorgeous - who the hell is that old broad and why does her voice sound like that when she doesn't even smoke cigarettes?

Oy. Middle age is a bitch, but I highly recommend it as an alternative to death. Though sometimes when I get out of bed in the morning, I'm not sure if I'm still alive or not.

Later,
xo
Posted by RobinSlick at 9:18 AM